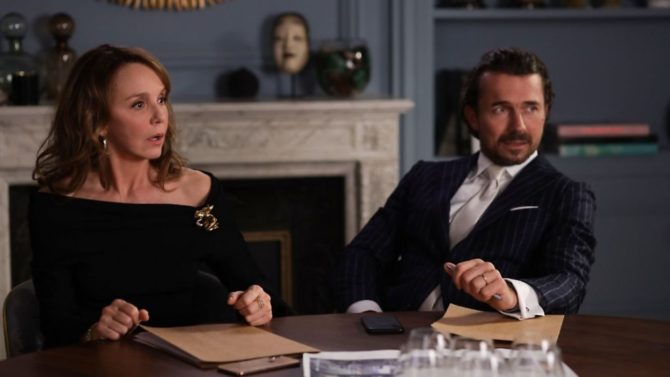 Get to know the French actors from the hit Netflix series

The matriarch of marketing agency Savoir, the intimidating Sylvie is Emily’s boss in France and is immediately disappointed to find out her new employee doesn’t speak French. She’s played with frosty flair by Italian-born Philippine Leroy-Beaulieu, the daughter of prolific actor Philippe Leroy-Beaulieu. Although she spent her childhood in Italy, Philippine moved to Paris aged 16 to study drama and made her screen debut in the 1983 French comedy Surprise Party. Her career spans film, television and stage work, and you may recognise her from her recent role in the smash-hit TV series Call My Agent! (Dix pour cent).

Gabriel is Emily’s neighbour-turned-love-interest who works at a chef at a local restaurant. In real life, actor Lucas Bravo was indeed a sous-chef at a Japanese-French fusion restaurant before bagging his top role. The 32-year-old hails from Nice and is a model and an actor who has appeared in other French series such as Plus Belle la Vie, T.O.C. and Smart Ass. Emily in Paris marks his first foray into American television and he’s set to appear in a new film adaptation of Mrs Harris Goes to Paris alongside Jason Isaacs and Lesley Manville, currently filming in Paris.

Emily’s kind French friend – oh, and Gabriel’s girlfriend – Camille is from a rich Champagne-producing family and works as a high-end gallerist. She’s played by French actress and model Camille Razat, who made her acting debut in her twenties in the gripping French TV series Disparue. Outside of her acting work, Toulouse-born Camille has modelled for iconic French brands including Cartier and Louis Vuitton.

Perhaps the sassiest member of Savoir, Julien is one of Emily’s colleagues at the marketing agency. Although they struggle to get along at first, with Julien finding Emily’s American ways both hilarious and annoying, they eventually gel. Actor Samuel Arnold is a born-and-bred Parisian but he now lives in London and has performed at the National Theatre in Anthony and Cleopatra alongside Ralph Fiennes. Before becoming an actor he was a professional dancer.

Julien’s partner in crime at Savoir, Luc is played by Bruno Gouery. There’s not too much on the web about Bruno, but we know from his Instagram that Paris is his hometown and he has featured in a number of films and TV shows including the French adaptation of Doc Martin.

As the head of a top French parfumerie, Antoine works with Emily and her employer, marketing firm Savoir. Actor William Abadie is one of the few French cast members with a prolific American screen presence, with roles in everything from Gossip Girl to Resident Evil and The Pink Panther. He even had a role on Sex and the City, another creation of Emily in Paris’ writer Darren Star. He trained at drama schools in Paris and New York and now lives between the two cities. According to his Instagram, he is a keen athlete, competing in marathons.

Prestigious French fashion designer Pierre Cadault becomes the focus of Emily’s attention when she wants to represent his brand. He’s artfully played by top character actor Jean-Christophe Bouvet, who has worked with directors like Jean-Luc Godard and Sofia Coppola. You may recognise him from the latter’s 2006 blockbuster Marie Antoinette.

Where was Emily in Paris filmed?

Previous Article How to snag yourself some secondhand bargains in France…and 10 other things we learnt in the December issue of French Property News (plus Living France!)
Next Article France winners at World Travel Awards revealed