First published: 18 May 2020 by Helen Parkinson 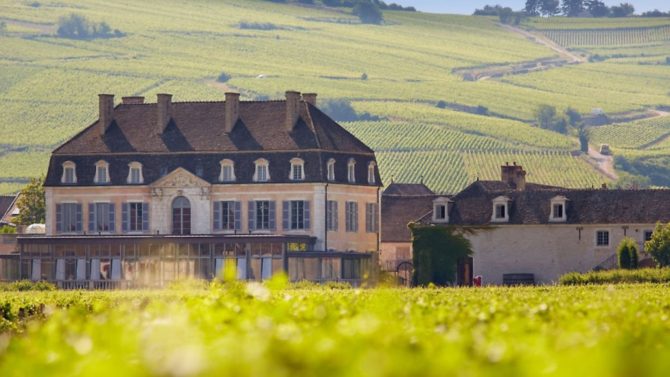 Relive the buzz of the harvest at one of Burgundy’s finest wine estates, the Château de Pommard near Beaune

I’m floating through a cloudless autumn sky around 1,000 feet above Burgundy’s bucolic Côte d’Or, a patchwork of golden vineyards cascading in every direction as far as the eye can see. Every roar of the burner above my head slices through the tranquillity of my high-altitude adventure, sending beads of sweat shooting down my spine. Hard at work down below, undoubtedly even sweatier than me, is an army of grape pickers, diligently plucking the finest berries for the new vintage. When I was told I’d be seeing France from a whole new perspective, I wasn’t quite expecting this!

The Côte de Beaune evokes the harlequin roof of the Hospices, the nose-tingling mustard of Edmond Fallot and, most pertinently, the bottles of liquid ruby and gold that have cemented the area as one of the world’s wine capitals. Beaune, a buzzing town of 22,000, sees its population swell with the arrival of the harvest, just as the trees don their fiery autumn coats, when a deluge of seasonal workers descends on the vineyards to reap their rewards.

I was to join the harvest at the Château de Pommard, founded in 1726 and, since 2014, owned by an ambitious Silicon Valley investor — and ardent Francophile – Michael Baum. Undaunted at being the first Americans to own a wine-producing château in Burgundy, Michael and his family — who split their time between Pommard and San Francisco —are endeavouring to make their home the ultimate destination for wine enthusiasts.

The château and its ancient vineyard, Clos Marey-Monge, make up Burgundy’s largest private clos. And it couldn’t be better situated, just to the south of Beaune and in one of the prestigious wine-producing communes on the Route des Grands Crus, the famed tourist trail for oenophiles.

Weighing up the scale of the property from the ground is tricky, so my hosts came up with a hot new solution: quite literally, in the form of a balloon ride over the vines. We departed from a field just outside Beaune; expecting a rocky take-off, I clung to the wicker basket, but to my relief the ascent proved astonishingly smooth. In no time at all, the waving bystanders below shrank to speckles as the balloon soared. From our lofty vista, I enjoyed my first view of the château, where tangles of vines radiated from every wall.

Pommard’s winemaking roots stem back to the 10th century, when the first pinot noir stocks were planted by Benedictine monks. In 2017, a comprehensive study into the Jurassic geology of Clos Marey-Monge unearthed seven different types of soil in this single vineyard.

It wasn’t until my vinous voyage that I learned quite how much soil can impact the flavour of a wine; so much so, it transpires, that it’s rumoured that Burgundian monks of yore used to taste the soil during their winemaking. I silently prayed that our own dégustation wouldn’t go to such extremes.

Despite a good hour passing, our descent felt all too soon. On the way down, we spotted the black-tipped ears of a hare as it raced alongside the shadow of the balloon, while a skittish roe deer leapt majestically into the air when he heard our chatter above him. Our bumpy landing a short time later certainly wasn’t so graceful!

From grape to glass

Nerves shredded but appetite for wine firmly whetted, it was time to get my hands dirty. Equipped with a sturdy pair of shoes — a must-wear, it turns out — I headed to the clos for the first stage of the harvest experience.

Already, the pickers were diligently making their way through the trellises under the intense September sun. I watched as they expertly selected and snipped tiny bunches of black grapes that fit the bill, throwing the chosen ones into the huge baskets carried on the backs of some of the stronger workers.

Château de Pommard has been a biodynamic winery since 2016, adhering to the principles Rudolf Steiner laid out in a series of agriculture lectures in the 1920s. A biodynamic winery is organic, meaning chemical pesticides are forbidden, but it also entails using natural harvesting methods; that’s where Mickey, the handsome Auxois draught horse, comes in to help.

Once I’d witnessed the pros at work, it was my turn to take part in the picking. Wielding a pair of secateurs, I made my way along the vines and carefully cut bunches of grapes — “as few of the stems as possible” —to fill my container. It took a surprising amount of time and effort to do so, despite its tiny size. I had a renewed respect for the cheery pickers doing this day in, day out.

I picked until I could pick no more, then it was off to witness the next step in the process. At the off-site production centre I observed, entranced, as the grapes were sorted on a long conveyor belt. I had expected this to be done by a machine, but it was undertaken efficiently by the workers.

In an adjacent room, Emmanuel Sala, Pommard’s experienced head winemaker, was arranging wine glasses ready for our first sample. Sala, a Burgundy native who has worked at the chateau since 2007, considers his role not just a job, but rather ‘a calling’. He took us through the fermentation process against an atmospheric backdrop of great metal vats. Our first tasting began not with wine, but rather a glass of super-sweet grape juice. This first concoction had been fermenting for around seven days and tasted like a sugary, albeit pleasant, children’s juice drink.

Next up was a glass of the month-old wine, which had the faintest hint of alcohol but was still deliciously syrupy. Finally, we admired the great oak barrels that are the wines’ final homes before being bottled. The production centre gave me a real insight into how much time and effort goes into creating every single bottle.

There was only one thing left—a proper dégustation to taste the fruits of our labour. We sampled the Pommard wines alone and paired with delicious Burgundian cuisine to really show them off, prepared by talented local chef Adeline Borra. The slow-cooked pork tenderloin with an exquisite Epoisses sauce was a sensation, knowledgably coupled with Clos Marey-Monge’s Monopole dry red, the pork the perfect foil to its heady woodland berry notes.

Over dinner, the famous Victor Hugo quote came to mind: “God made only water but man made wine.” My wine harvest experience opened my eyes to just how many people contribute to making one bottle, especially at a biodynamic winery. Santé to the future of viticulture au naturel!

Previous Article French food at home: 8 delivery and collection services
Next Article Behind the scenes at the Queen’s Hamlet and estate of Trianon at Versailles