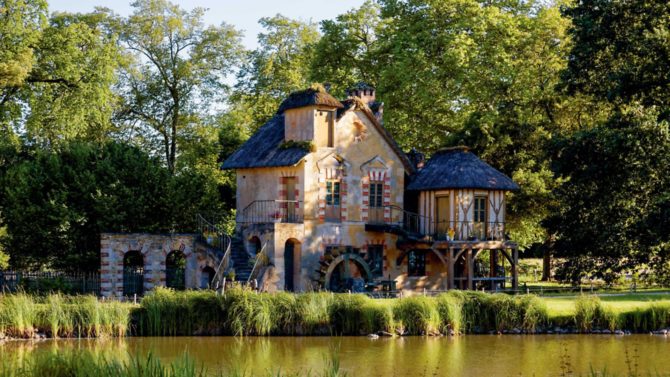 Transport yourself to The Grand Trianon and Marie Antoinette’s Hamlet at Versailles, near Paris, via these stunning new photographs

Hidden away from the Palace of Versailles on the grounds nearby, the kings of Versailles built The Grand Trianon, Petit Trianon and the Queen’s Hamlet, where they could slip away to entertain their inner circle.

A recently released book, Trianon and the Queen’s Hamlet at Versailles: A Private Royal Retreat, explores every aspect of life at these private outbuildings, from the furnishings and gardens to the history and inhabitants.

In 1687, the Sun King Louis XIV conceived of The Grand Trianon and its exceptional parterres and fountains as a seamless link between court and garden – a private retreat where he could withdraw with his family and escape the heavy hand of protocol.

Louis XV commissioned the Petit Trianon, a neoclassical masterpiece with four unique façades and its famous menagerie and botanical gardens. It was completed by royal architect Ange-Jacques Gabriel in 1768.

Louis XVI bestowed the Petit Trianon on Marie Antoinette; in her gardens and picturesque hamlet and farm, the queen’s presence is more tangible here than anywhere else at Versailles.

The queen regularly sought refuge at the Petit Trianon, where she commissioned marvellous landscaped gardens centred around a hamlet of cottages built in the rustic style then in vogue.

The Queen’s Hamlet, constructed between 1783 and 1786, is an excellent example of the contemporary fascination with the charms of rural life and included a windmill and dairy, as well as a dining room, salon, billiard room and boudoir.

Written by Jacques Moulin, the chief architect for numerous French heritage sites, including Versailles, with photography by Francis Hammond, who has contributed to many books including Versailles: A Private Invitation, this impressive volume features newly commissioned photography and is both a historical testimony and an intimate visit to the grounds of the Palace of Versailles.

Trianon and the Queen’s Hamlet at Versailles (Flammarion 2019) by Jacques Moulin with contributions by Yves Carlier and photography by Francis Hammond. The book is available to buy online en.chateauversailles.fr

The estate of Versailles is currently closed due to the coronavirus outbreak, but you can take a virtual visit of The Queen’s Hamlet online via the website en.chateauversailles.fr/long-read/queens-hamlet

How many of these classic Paris experiences have you ticked off?

Previous Article From grape to glass: A taste of the wine harvest at a prestigious Burgundy château
Next Article View from the top: Seven stunning French mountain properties