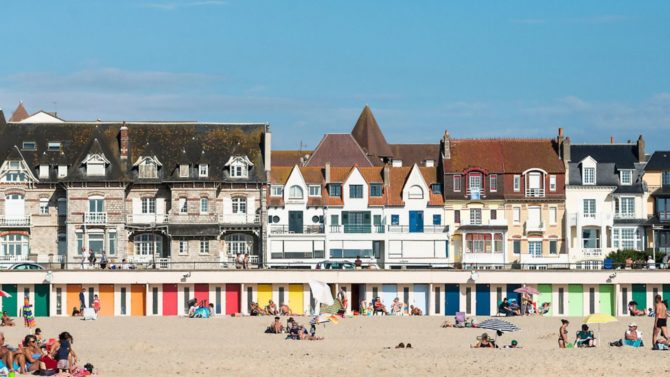 You might have to squint a bit to conjure a true Côte d’Azur but getting a taste of the south in the far north isn’t as far-fetched as it sounds, luxury doesn’t have to mean wasteful, and there are changing perceptions of the north afoot. And if you’re comparing Cannes and Le Touquet round trips, it means 1,400 less carbon-footprint miles from Calais, and all that’s self-righteous about flight dodging. Perhaps it’s time to stop in that bit of France we habitually motor on through?

Get the glamour: Le Touquet

With its casinos, luxury hotels, golf courses and boulevards of turreted Anglo-Norman villas, Le Touquet became the Franco-British smart set’s go-to destination of choice in the early 1900s. See the who’s who for yourself on the never-ending wall of fame at the Westminster Hotel, from Wodehouse, Coward and Fleming to Piaf, Dietrich and Gainsbourg – and it still upholds its reputation as a chichi, see-and-be-seen type of place. The beach has been in TripAdvisor’s Top 10 in France three times in the last five years, probably on account of what one can get up to: horse riding, kids’ clubs, kitesurfing, summer bars, longe-côte, paddleboarding, cycling the dunes and forest. You’ll also find galleries, a casino, a racecourse, golf club and lido, while many a designer label and smart foodie store grace the streets around Rues St-Jean, St-Louis and de-Metz. And all effectively a mere 69 miles from Dover.

What Montreuil lacks in ocean, it more than makes up for in medieval. This village perché, where ironwork lanterns light up carriage-size doorways in tall red-brick hôtels particuliers, is certainly northern France’s answer to a Provençal Bonnieux, Gordes or Roussillon. Montreuil has also built its name on gastronomy, with an ecosystem of suppliers, from the humble boulanger to the Michelin-starred chef, all cohesively operating an island of super-low food mileage. There’s the successful ‘Pique-Nique-Chic’ initiative where Montreuil restaurant menus tempt locals, workday lunch-breakers and visitors to pick up a three-course ready-to-eat lunch to tuck in to at a spontaneous spot like the ramparts, while the ‘Dîner Insolite’ foodie experience involves e-biking from Le Touquet to Montreuil and a dinner venue with a twist.

Get the art: Matisse

You’ve experienced Matisse’s Vence chapel, Antibes’ Picasso museum, and sought out Van Gogh in Arles, but off the beaten track and up north are art pockets you might be less familiar with. There’s the LaM Modern Art museum in Lille, the Musée des Beaux-Arts in Valenciennes, the Musée-Condé in Chantilly and the newish Louvre in Lens. Perhaps most surprising is that possibly the most influential artist of the 20th century ‒ and someone we more readily associate with the Côte d’Azur ‒ has an art museum dedicated to him in Le Cateau-Cambrésis. And that’s because Matisse was a man of the north, born in a weaver’s cottage here, son of a seed merchant. Alongside the works of fellow trailblazers Picasso, Chagall and Leger, the museum charts Matisse’s extraordinary life and work, from the boy who was first gifted a set of brushes during a period of childhood convalescence to the artist who inventively set upon exploring the possibilities of colour over earthy palettes and basic shape over realism.

… Trade the Cannes Film Festival’s red carpet for Deauville’s, further west on the shores of Normandy. Like Le Touquet, it is known for its distinctive Anglo-Norman architecture, and its boardwalk and red beach brollies are iconic.

… Trade the chic Belle Époque airs of Plage-Mala in the south of France for its counterpart in the north: the tiny cove at Bois de Cise, midway between Dieppe and Saint-Valery-sur-Somme. Also head to Le Crotoy, the only south-facing beach in the north of France, where Hôtel Les Tourelles has a feel of The Hamptons.

… Trade Marseille’s Calanques cliffs for Calais’ Deux Caps. Sandwiched between Cap Blanc-Nez and Cap Gris-Nez is Wissant beach, known for being one of the most beautiful in France.

Quiz: How well do you know the French seaside?

Beauty and nature on the Cap d’Antibes

Where to buy property in Pas de Calais

Previous Article Learn French: 10 questions to ask when buying a house in France
Next Article 7 things we learned in August 2021 issue of FRANCE Magazine