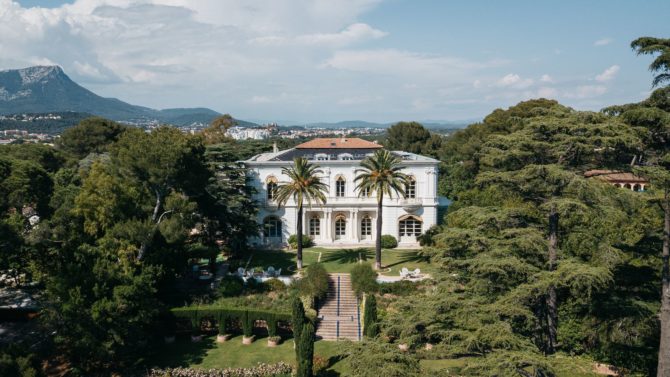 A new Downton Abbey film, partly set in France, is scheduled to hit UK cinemas on 29 April 2022 and then US cinemas on 20 May 2022 (delayed from the original release date).

This time the British period drama is getting an injection of French flair as the Crawley family and their staff take a trip to the south of France.

Downton Abbey: A New Era, the sequel to the first Downton Abbey film released in 2019, will see the main cast reunited and joined by new faces Hugh Dancy, Laura Haddock, Nathalie Baye and Dominic West. Read to the end of this article to watch the trailer.

The trailer tells us that a mysterious man has gifted the Dowager Countess of Grantham, played by Dame Maggie Smith, a villa in France which she gladly accepts. “Do I look as if I would turn down a villa in the south of France?” she says. Well, would any of us?

Some of the family stay in Downton as a director, played by Hugh Dancy, shows up wanting to make a motion picture at the house. Others take full advantage of the opportunity to head off to La Belle France to take a look at the property, explore the mysteries of the countess’s past from back when she was simply Lady Grantham, and enjoy a French holiday in the sun!

The film was shot on location in a real French villa in Var, Provence-Alpes-Côte d’Azur. The Villa Rocabella (which appears to be called The Villa of the Doves in the film) is in the coastal commune of Le Pradet, close to Toulon.

Surrounded by a three-hectare wooded park, enjoying a spectacular sea view, and giving access to a Mediterranean cove, the magnificent villa was first built in the nineteenth century in a Belle Époque style.

Inside are several impressive reception and meeting rooms and a hall with a majestic marble staircase leading to 11 uniquely charming rooms in Napoleonic decor.

If you want to holiday like the Crawleys you can book a place at one of the wellness retreats at the Villa Rocabella, which start from €490 per person per day, and enjoy the luxury full board accommodation and access to the pool and jacuzzi. Rocabella is also due to open further accommodation in its newly constructed ‘cottage’ and ‘bastide’ this spring.

Is this incredible property ringing a bell? Downton Abbey is not the only film to use the villa for filming, the house has also featured in A Perfect Man (2015), The Summer House (2019) and The Man Who Sold His Skin (2020) and more.

Catch a few more glimpses of the villa as well as the parties and boat rides that the Crawleys enjoy on their French vacation, in the trailer for Downton Abbey: A New Era from Focus Features. It promises to be ‘The grandest escape of the year’.