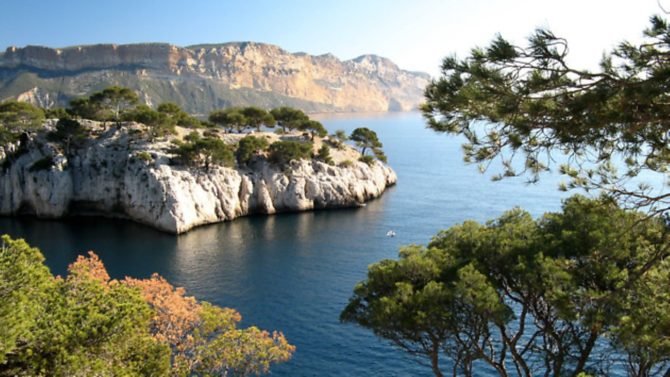 There are 7 amazing national parks in mainland France, here is a quick guide to the French national parks and why you should make time to visit all of them

Where is it: Bouches-du-Rhône and Var, Provence-Alpes-Côte d’Azur

Communes: 7, of which 3 are in the heart of the park

A calanque is a narrow, steep creek, often formed from limestone, found along the Mediterranean coast – which should give you some idea of this national park’s character. The 10th park to be created, it includes coastline and several islands as well as a vast aquatic space boasting one of the Mediterranean’s most diverse underwater ecosystems. It is the only park to contain both land and sea – only 85km² of it is on land – and despite its vast swathes of wilderness, it is located close to the busy city of Marseille, home to two million people. At the other end of the park, you’ll find the popular coastal towns of Cassis and La Ciotat.

Where is it: Savoie, Auvergne-Rhône-Alpes

France’s first national park, the Vanoise was created to protect the ibex; these delightful creatures can still be seen from the 600km of hiking paths, along with other animals such as chamoix. Sandwiched between the Tarentaise and Maurienne valleys, in the French Alps on the border with Italy, the park offers dramatic scenery with numerous peaks over 3,000m. There’s little by way of development within the park itself, but along its fringes there are the gateway towns of Bourg St-Maurice, Moûtiers and Modane, and ski resorts such as Val-d’lsère, Tignes and Val Thorens, as well as traditional mountain villages.

Where is it: Hyères islands, Var, Provence-Alpes-Côte d’Azur

This coastal and marine park focuses on the conservation of marine biodiversity. It comprises the islands of Port-Cros and Porquerolles, the Giens peninsula, Salins d’Hyères (salt marshes) and the Cap Lardier. One of the biggest challenges of this park is the influx of two million visitors a year throughout the protected areas. As well as its natural treasures, the area has a considerable cultural and historical heritage, including numerous military forts, Roman remains and shipwrecks. Port Cros can only be visited on foot, while Porquerolles can be explored on foot or bicycle. Although one of the oldest parks, it was remodelled in 2012 on the principles of sustainable development. Both islands have harbour towns.

Where is it: Pyrénées-Atlantiques, Hautes-Pyrénées, Occitanie

From the name of this park it’s clear that it’s all about the mountains, but it also boasts lakes, waterfalls, forests and, of course, a huge abundance of wildlife – including the brown bear, recently reintroduced into the park (not without some local objection). On the border with Spain, the park’s best known feature is probably the stunning Cirque de Gavarnie, while towns include Laruns , Cauterets, Luz-St-Sauveur, Gedre, Barèges, Aragnoet and Arreau. Walking is, of course, popular – the challenging Haute Randonnée Pyrénéenne crosses the park – as is road cycling, with famous mountain passes at Col du Tourmalet and Col d’Aspin, and there’s also skiing in winter.

Where is it: Lozère, Gard, Ardèche and Aveyron, Occitanie and Auvergne-Rhône-Alpes

In the south of France, the Cévennes is remarkable for its unique balance between man and nature, shaped by successive generations dating back to the Neolithic era. It is inhabited right into its ‘heart’. The park contains the Aven Armand cave, as well as high peaks such as Mont Aigoual and Mont Lozère. The area was made famous by Robert Louis Stevenson’s ‘Travels with a donkey’, one of his earliest works. Today the mountains, valleys and plateaux are popular with walkers who will come across reminders of the Camisard religious wars of the 17th century as well as signs of the past silkworm trade. Florac is the main town and there are many traditional villages including the Plus Beau Village of La Garde-Guerin.

Where is it: Hautes-Alpes and Isère, Provence-Alpes-Côte d’Azur and Auvergne-Rhône-Alpes

The Écrins National Park is mountainous territory (the highest point is the Barre des Écrins at 4,102m) with defined valleys (Oisans, Valbonnais, Briançonnais, Vallouise, Embrunais, Champsaur and Valgaudemar) as well as lush meadows. Its diverse vegetation is a result of huge differences in altitude and the climatic influences of the Alps and Mediterranean. It is ideal territory for hiking and other outdoor pursuits including skiing and mountaineering. The scattering of villages within the park includes Vallouise and Les Vigneaux. The ski resort of Les Deux Alpes is just outside the park, along with towns such as Briançon and Gap, where some of the park’s information centres are found.

The Living France guide to the great outdoors

18 pretty villages in Midi-Pyrénées you need to visit

Where is it: Alpes-Maritimes, Alpes-de-Haute-Provence

On the border with Italy, about an hour from the Mediterranean, this southern Alpine region is popular for hiking, with over 600km of marked footpaths, as well as mountaineering, and watersports on the many rivers and lakes. There are ski resorts too, such as Pra Loup, Sauze/Super-Sauze and Val d’Allos. The central uninhabited zone comprises seven valleys (Roya, Bévéra, Vésubie, Tinée, Haut Var/Cians, Verdon and Ubaye), while the peripheral zone is home to 28 villages, many ‘perched’ such as Belvédère. The Vallée des Merveilles is a unique site, home to hundreds of 3,000-year-old rock carvings of people and animals. Towns on the edge of the park include Barcelonette, Sospel, St-Martin-de-Entraunes, St-Sauveur-sur-Tinée, St-Etienne-de-Tinée and St-Martin-Vésubie.

Previous Article You could buy these French properties for less than €50,000
Next Article Are these the best beaches in France?