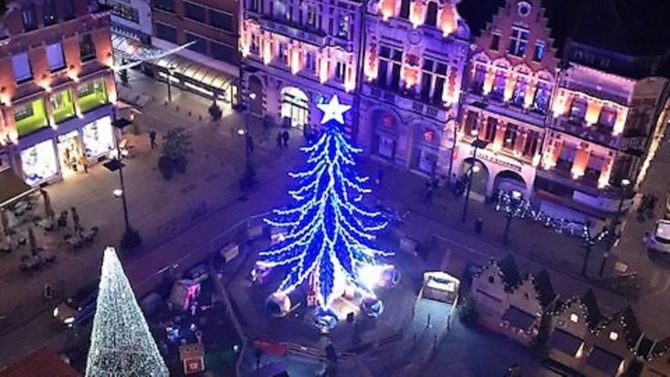 These welcoming and wonderful Christmas markets are just a short trip across the Channel away, so what are you waiting for?

The Christmas markets of the Pas-de-Calais département are generally thought of as being among the biggest and best in France and being so close to the UK, they’re also some of the easiest to reach.

I was full of anticipation and eagerness to get into the Christmas spirit as I arrived on the Eurostar into Lille, to see the markets in action for myself.

First stop was the charming city of Béthune, about 20 miles west of Lille. As we were dropped off near the edge of the beautiful Grand’Place, the city and its cheerful Christmas market made an immediate good impression. The large, paved square was full of light, colour and sound as families and groups of friends heralded the beginning of the festive season in style. The square itself is surrounded by shops, cafes and restaurants that all added to the happily bustling feel of the place.

The market had all of the usual Christmas attractions such as lovingly decorated trees, as well as children’s rides, a ferris wheel and light shows, alongside the riot of colour displayed in the numerous stalls and the intoxicating aromas of gingerbread, vin chaud and warm chestnuts.

We enjoyed a reception with local officials where we were served delicious food from the local area and I was delighted to be told we could climb the city’s magnificent belfry, which stands at 154ft.

Le beffroi dates back to the 14th century and it is 133 steps up a spiral staircase to reach the viewing platform at the top. Squeezing myself through the tiny doorway to get outside, I was rewarded with an incredible panoramic view of the market and rooftops of the city. It was a magical experience.

Béthune was severely hit by German bombing in May 1918 with large parts of the city left in ruins and its beffroi was also badly damaged. However it stood strong and was rebuilt, along with many houses, and we should all be glad that it did as it is a fine structure to be enjoyed by generations to come. The Cité de Noël in Grand’Place began on 24 November and runs until 31 December so there is still plenty of time to get over there and enjoy all that Béthune has to offer.

It is just 45miles south east of Calais and is open on Mondays, Tuesdays and Thursdays from 3-8pm; Wednesdays 2-8pm; Fridays 3-10pm; Saturdays 11am-10pm and Sundays 11am – 9pm. For more information about Béthune and its Christmas market visit tourisme-bethune-bruay.fr

Moving on from our lovely trip to Béthune, we headed about half an hour south to Arras, which has the biggest Christmas market north of Paris. Arras is the capital of the Pas-de-Calais département and is its third most populous town after Calais and Boulogne-sur-Mer. The vast space of Grand’Place is a magnet for tourists and the town hall and belfry, which is Unesco listed, make it a beautiful city to stroll but it is at this time of year when it is at its most atmospheric.

The Christmas market is based around the main Flemish-style square as well as the city’s second main square, Place des Héros. Set in an enclosed space around the restaurants and shops, approaching the entrance of the market fills one with anticipation as you spy the forest of decorated trees and scented advent wreaths.

The huge space accommodates 140 picturesque chalets, stalls and attractions, all offering something special and different to the thronging crowds as they meander their way through the red-carpeted square, flowing like water around rocks in a stream.

Put simply, if you love Christmas, you will love Arras’ Christmas market and even if you don’t, this is Christmas turned up to 11, and it would take a person hard of heart not to be swept along in the festival of colour and good cheer.

All tastes are catered for among the many food stalls and there are plenty of bars selling beers, vin chaud, spirits and coffee – look out in particular for the steampunk bar where they like to add some theatre to the drink making process – one not to miss. Children can enjoy the large ice rink, hand-crafted toys, toboggan slide, merry-go-round and ferris wheel that gives wonderful views of the area.

Father Christmas even descends from the city’s beautiful belfry on December 6 to hand out sweets to children in the town hall.

Arras Christmas Market began on 30 November and comes to an end on 30 December.

It is open from Mondays – Thursdays from 12noon-7.30pm; Fridays 12noon-9pm; Saturdays 10am-9pm and Sundays 10am-7.30pm. It will be open every day except Christmas Day. For more information visit explorearras.com

Like most lovers of France, I get a buzz out of simply being in the country, but these excellent Christmas markets really add an extra portion of joy to proceedings. With the markets in Béthune and Arras ongoing throughout December, there is still plenty of time to find out why the people of the region are known for their friendliness.

As I headed back north to Calais, I felt disappointed that the trip was over, but delighted that I had experienced the best of northern France’s Christmas traditions.