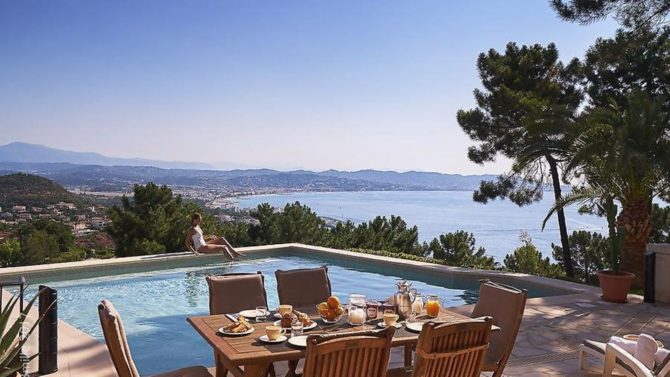 Live the high life with our pick of impressive properties for sale across France – some are budget-friendly too!

Forget country cottages, for a property with a real wow factor we’re thinking châteaux, chalets and chic city pads – and they don’t always have to cost the earth (although we’ve thrown in a few ultimate dream homes too).

Châteaux never go out of fashion but they’re enjoying a bit of a moment right now, due in part to the popular TV programme Escape to the Château, with the wonderfully eccentric Angel and Dick Strawbridge. A browse on FrancePropertyShop.com reveals over 200 châteaux for sale, with the most expensive one being a fairytale eight-bedroom property in Vienne at €5.5m.

We’ve picked a remarkably affordable one though – for the price of a very average flat in London (€595,000), you could be the chatelaine/e of this striking 19th-century château in Nièvre, Burgundy. Currently run as a luxury B&B, it has 15 bedrooms spread over five apartments, four guest rooms and two suites. Located on the outskirts of a fabulous spa town with casino, restaurants and other facilities, it’s also close to the Morvan regional nature park.

A room with a sea view rarely comes cheap, especially when that room is on the Côte d’Azur. If you’re shopping on a budget and are willing to compromise on size, some great bijoux apartments can be found. But we’re indulging ourselves here with this €2.49m villa – still sort of a bargain as the highest priced Riviera pad on FrancePropertyShop.com is an eye-watering €45m!

Nestled into the hillside near Theoule-sur-Mer, with panoramic sea views, this tastefully renovated villa has five bedrooms, a vast double lounge, kitchen and dining room opening onto the terrace and that amazing pool.

One of the most classic styles of property you find in France is the ‘maison de maître’. Literally translated as the master’s house, these properties were built to reflect the wealth and success of the owner, but with refined and elegant features, nothing too over-the-top and showy. The façade is generally symmetrical, often with three storeys, and set in a prime position whether town or country.

While they all share a certain look, they vary considerably in price, and we’ve found a real bargain. For just €85,000, this grand home in Charente has three bedrooms, a beautiful living room with period fireplace, kitchen, wonderful oak staircase, and an attic across the whole house – and it’s not even a wreck awaiting renovation, this property is perfectly habitable, just needing some modernisation and your own stamp putting on it.

Oh for a pied-à-terre in the French capital – and we don’t mean a tiny studio hidden away in an ancient building in a less-desirable arrondissement (although these can of course be found if your budget is tight). No, the dream French apartment would have gleaming parquet floors, ceiling mouldings, spacious rooms, high ceilings, elegant sash windows and, of course, be close to the action.

Rather like this beauty then. Just steps from the Champs Elysées, on the first floor of a beautiful Haussmann building, this elegant four-bedroom apartment is full of period character. Priced at €2.1m, it’s ideally situated away from the urban buzz, yet is close to the local shops of Avenue Carnot and the Ternes food market with its famous bistros and bars.

Whether you’re a keen skier or not, it’s hard to beat the majesty of the mountains in winter, especially at Christmas time. The Alpine ski resorts are swamped with visitors from all over the globe, many of them squeezing into tiny studios that somehow manage to sleep 10! At the other end of the scale, luxury chalets for sale in resorts such as Courchevel can command tens of millions of euros.

Just a few minutes from Chamonix – which is as popular in summer as in winter – this authentic six-bedroom farmhouse has been beautifully renovated to combine the best of old and new – it’s full of character but also boasts an indoor therapeutic pool system and an elegant spa with sauna and steam room. On the market for €1.69m, there are nine rooms arranged around the large living room, while outside there’s a terrace and garden. Naturally, there are breathtaking views of the mountains and pastureland.

Renovating a château in Normandy