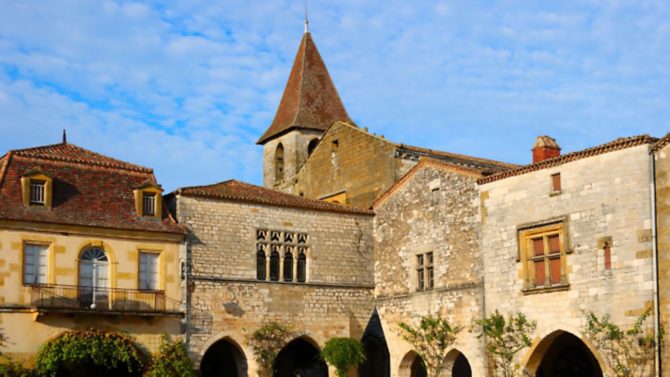 The restructuring of France’s regions in January 2016 meant that the former regions of Aquitaine, Limousin and Poitou-Charentes were merged together to form a new super region that covers most of the south-west of France from the Spanish border to La Rochelle. The French government is still debating the name of this new region so it is currently called Aquitaine-Limousin-Poitou-Charentes.

This region is very popular with holidaymakers and expats who are drawn to the sunny climate, pretty towns and villages, rolling countryside and vineyards and Atlantic beaches.

It is a very diverse region. In the far south, near the Spanish border, the area is known as the Basque region with a distinct culture and cuisine and a number of bustling seaside resorts. Further inland, the departments of Dordogne and Lot-et-Garonne are typical of south-west France with scenic countryside, meandering rivers and beautiful bastide villages. The countryside varies from vineyards around Bordeaux and Cognac, sunflower fields in Charente, rolling greenery in Limousin and the green marshlands of the Marais Poitevin in Deux-Sèvres. All along the coast there are popular seaside resorts and quieter natural beaches.

The region of Aquitaine-Limousin-Poitou-Charentes is made up of 12 departments:

Pyrénées-Atlantiques borders Spain in the far south-west of France and includes the popular seaside resort of Biarritz. The capital is Pau.

Landes is further north and is home to popular surfing beaches and Europe’s largest forest. The capital is Mont-de-Marsan.

Gironde is on the south-western coast and has the vineyards of the Bordeaux and Médoc wine areas. The capital is Bordeaux.

Dordogne is popular with tourists and expats and has lots of beautiful towns and villages to explore. The capital is Périgueux.

Lot-et-Garonne borders Dordogne and has a number of pretty riverside villages, including Villeneuve-sur-Lot. The capital is Agen.

Corrèze is in the heart of France and borders Dordogne, it home to the town of Brive-la-Gaillarde and the village of Collonges-la-Rouge. The capital is Tulle.

Creuse is a rural department in central France with lots of scenic countryside to discover. The capital is Guéret.

Haute-Vienne is known for its tolling landscape of forests, lakes and rivers dotted with historic chateaux. The capital is Limoges.

Charente also borders Dordogne and is home to the towns of Cognac and Jarnac and the village of Aubeterre-sur-Dronne. The capital is Angoulême.

Charente-Maritime is on France’s western coast and has the popular seaside resort of La Rochelle as its capital.

Deux-Sèvres is also largely rural and has the Marais Poitevin – France’s ‘green Venice’. The capital is Niort.

Vienne is named after the Vienne river and is also mainly rural, although attractions include the Futuroscope theme park and capital city Poitiers.

Plane: The main airport in Aquitaine-Limousin-Poitou-Charentes is Bordeaux airport which has regular flights from London and regional UK airports all year round. Other airports with flights from the UK are Biarritz, Bergerac, Brive Vallée de la Dordogne, Limoges, Poitiers and La Rochelle.

Train: There is a TGV train line from Paris to Bordeaux which takes just over 3 hours.

Car: The A10 autoroute (one of France’s motorways) connects Paris and Bordeaux passing through Poitiers and Niort for those driving in France.

Places to visit in Aquitaine-Limousin-Poitou-Charentes

The largest city in the Aquitaine-Limousin-Poitou-Charentes region is Bordeaux. The city is a UNESCO World Heritage Site and its 18th century architecture can be seen in the boulevards, narrow paved streets and large squares. Read: top 10 attractions in Bordeaux

La Rochelle is a harbour town on the western coast and is very popular with French holidaymakers in the summer. The Vieux-Port, old port, is the heart of the town with seafood restaurants, pretty sailing boats and the impressive three towers that guard the entrance to the harbour – Tour de la Lanterne, Tour Saint-Nicholas and Tour de la Chaîne.

Just off the coast of La Rochelle are three of France’s prettiest islands: the Île de Ré, Île d’Aix and Île d’Oleron. These are all popular with Parisians on their summer holidays, because of their pretty sand dunes, forests, leafy squares, long sunny days and good restaurants. Find out more about these islands and others: 10 beautiful French islands to visit

Angoulême is capital of the Charente department. Angoulême’s old town is perched on a hill above the River Charente and some of the original ramparts remain. Angouleme is known as the home of comic strips (bande dessinée) and there are comic strip characters painted onto the side of buildings, including La Fille des Remparts on the city ramparts.

Brive-la-Gaillarde is the biggest town in Corrèze. It is a charming town with a pedestrianised centre full of cafés and shops and the church of Saint Martin, a busy food market and plenty of gourmet restaurants.

Sarlat-la-Canéda is one of the major tourist attractions in Dordogne, especially the Saturday morning market. Sarlat-la-Canéda has more listed buildings per square metre that anywhere else in Europe. To get a bird’s eye view of the town ride to the top of the church belfry in the glass lift (ascenseur panoramique).

Bergerac is a sleepy medieval town on the banks of the Dordogne River that is popular with French and British second home owners. Bergerac is surrounded by vineyards and the old town (vieille ville) has some pretty streets and squares to explore.

The Aquitaine-Limousin-Poitou-Charentes region is home to 30 of the Plus Beaux Villages de France (France’s most beautiful villages). Some of the best ones to visit are: Monpazier, one of the best preserved bastide villages; La Roque-Gageac, on the banks of the Dordogne River and backed by steep cliffs; Collonges-la-Rouge, a red-brick village where the Plus Beaux Villages de France association was founded in 1982; Aubeterre-sur-Dronne where you can find a stunning monolithic underground church of Saint-Jean built into the rock in the 12th century; Ars-en-Ré on the Île-de-Ré island just off La Rochelle.

The Aquitaine-Limousin-Poitou-Charentes region is also home to Europe’s longest stretch of sandy coastline, the Côte d’Argent, starting in the mouth of the Gironde River and finishing in Biarritz near the Spanish border. Within this 200km stretch of coast you will find the resorts of Biarritz, Hossegor, Capbreton and Bicarousse, all popular with surfers and windsurfers because of the large Atlantic waves. But there are plenty of quieter beaches along this coast where you can escape the crowds.

Further up the coast, to the west of Bordeaux, is the highest sand dune in Europe, the Dune de Pilat, and the 19th century seaside resort of Arcachon which is famous for its oysters.

Things to do in Aquitaine-Limousin-Poitou-Charentes

The Aquitaine-Limousin-Poitou-Charentes region has several areas of beautiful countryside to explore. The Marais Poitevin in Deux-Sèvres is known as France’s’green Venice’ and is a wetland that great to explore by bike or boat and home to wildlife. The Millevache National Park in Corrèze and Haute-Vienne is a large area of green countryside where the famous Limousin cows roam. There is also Lac de Vassivière which is one of France’s largest lakes and has areas marked for watersports and man-made beaches. Behind the beaches of the southern Atlantic coast in Landes is Europe’s largest forest, planted by Napoleon III with numerous cycling and walking paths.

A number of rivers run through the Aquitaine-Limousin-Poitou-Charentes region, perfect for boating holidays, kayaking trips, rides on a traditional gabarre boat and with many pretty riverside villages to visit. The rivers in the region include the Dordogne, Gironde, Vezere, Charente.

With the Bordeaux, Médoc and Bergerac wine areas, wine is the main drink in the Aquitaine-Limousin-Poitou-Charentes region. Take a tour of some of the local vineyards and you will discover some new wines to try. Read our 10 tips for making the most of a vineyard visit first. The region’s other speciality drink is cognac, which is produced in the area around the town of Cognac in Charente, and an aperitif called pineau des Charentes. Seafood is a speciality along the coast and other food specialities include truffles, foie gras, duck and beef. Those with a sweet tooth should try a canale from Bordeaux, a gateau basque or a clafoutis.

As the region of Aquitaine-Limousin-Poitou-Charentes is so big, property prices vary considerably. In general, properties are more expensive in the larger towns, near the coast and near popular tourist towns while further inland, in the areas less popular with tourists properties are much cheaper.

However, Aquitaine-Limousin-Poitou-Charentes is also home to France’s cheapest department for property – Creuse, where the average property price is only €63,300. If you avoid the tourist towns and villages, then there are bargain properties to be found in the departments of Dordogne (average property price €113,000), Lot-et-Garonne (€124,000), Corrèze (€105,000) and Charente (€109,000).

Property styles also vary considerably in the Aquitaine-Limousin-Poitou-Charentes region. You will find typically French village houses with blue or green shutters, exposed stone walls and wooden beams in the Dordogne and Lot-et-Garonne departments.

In the Basque area in Pyrénées-Atlantiques you will find Basque style white houses with red or green colombage (half-timbered) exterior, and Béarnaise houses with a characteristic sloping roof, sometimes with a slope of more than 50º.

In Poitou-Charentes, the typical house style is charentaise – stone-built rectangular houses with tall windows with shutters.

Expats running a gîte business in the Marais Poitevin