8 reasons to ski in Aussois 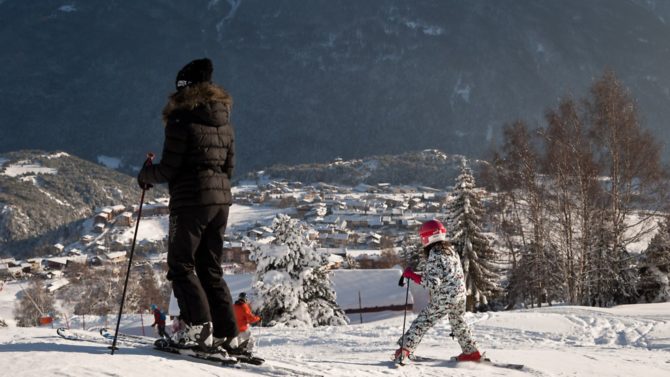 Near the Italian border you will find the charming resort of Aussois, a lesser-known ski resort and a peaceful village that is the perfect combination of traditional French skiing and rich culture

Aussois has 55km of slopes between 1500m and 2750m to suit every skier. The Les Balmes black run is a great challenge for advanced skiers, while intermediates can explore the many blue and red slopes. Cross-country skiers can visit the local village of Sardières via the 15km red run (which also has 30km of Nordic tracks), or explore the opportunities at Vanoise National Park. Beginners and families can have fun on Aussois’ cultural blue snow trail, or on the green slopes as high as 2150m!

As one of the lesser-known ski resorts, Aussois is the ideal resort for tranquil skiing in a picturesque setting. Guests benefit from uncrowded slopes, virtually no lift queues and modern lifts which can take skiers from the slopes to the summit in less than 15 minutes, so there’s more time for skiing!

Aussois has several great options for 3* self-catered accommodation to suit families, groups and couples. From the heart of the resort next to restaurants and shops, to apartments with fantastic views over the village, there’s something for everyone. Plus, when the accommodation price is combined with lift passes, ski lessons, meals and activities, Aussois is among the best for value for money in the French Alps.

Aussois has plenty of family-friendly experiences both on and off the snow. Race each other on the toboggan runs, make friends with animals on a guided donkey or a horse-drawn carriage ride, practise spins on the ice skating rink or relax and have a picnic at the ‘espaces contamplatifs’. As Aussois has taken extra steps to make it easier for parents, such as the special pathway for pushchairs from the village centre to the ski slopes and a ‘children’s garden’, there’s no wonder it has been labelled a “Famille Plus” resort for over 10 years.

Aussois guests can ski more pistes, and use the ski bus, with the Eski-Mo pass. With the pass guests can ski Aussois’ 55km of slopes, and have access to the Val Cenis, La Norma, Valfrejus and Bonneval ski areas. That’s over 300km of pistes available! For those with a car, Aussois is in a great location to access other resorts such as Orelle, the ‘backdoor to Trois Vallées’ with 600km of pistes, which is only a 20-minute drive away.

Aussois is easy to reach for those travelling from the UK. At two hours from Geneva Airport and just 10 minutes from the motorway, it’s highly convenient for those opting to self-drive or fly. For those considering the ski train, Aussois is just a four-hour journey from Paris.

Aussois is the ideal base for anyone wanting to combine a ski holiday with the ambience of timeless, rural France. Built around a central square (complete with fountain) there are plenty of peaceful shops, including pâtisseries and brasseries with artisan beer, and several restaurants serving traditional French cuisine, including one in the 19th-century Fort Marie-Christine.

Aussois is perfect for non-skiers or for those looking to try something different. Experience the 230m-long zip wire, paragliding, riding a ‘yooner’, snowshoeing, snowtubing, or ice climbing on the icefall Nant. Spend the day exploring the surrounding plateau by dog sled, discovering the longest Via Ferrata in France (3760m) at Fort Victor-Emmanuel, learn in the L’Arche d’Oé Museum; or try a night in the mountain pasture chalet.

Stay with Peak Retreats at Les Flocons d’Argent in Aussois.

7 nights self-catered from £105pp* including a Eurotunnel crossing with a free upgrade to FlexiPlus.

Previous Article What is it like to move to France on your own?
Next Article How to decorate your home in French style this Christmas