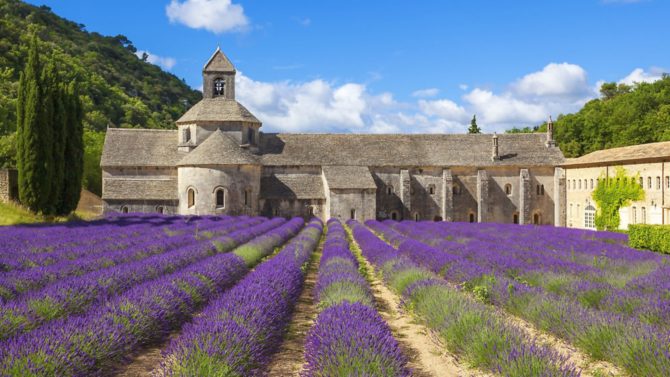 From arts festivals to wonderful food markets, there is plenty to do in Provence this summer

This fragrant, summer-flowering plant has been described by many as the soul of Provence. You’ll find gorgeous fields of the purple stuff throughout the Vaucluse, in particular on the Valensole Plateau, where large swathes of the plant envelop rustic villages, ramshackle farmhouses and centuries-old monuments. For a truly Instagrammable shot, don’t miss the Abbaye de Sénanque; this quaint, 12th-century Cistercian monastery is framed by endless rows of perfectly-arranged lavender and makes for an indelible image, one which has featured on postcards and the front cover of countless holiday brochures for years.

Shop at the food markets

One of the joys of visiting Provence has to be exploring one of the region’s food markets. Almost every village has a weekly market; in some places they take place several times during the week, or even daily. Wherever you go, you’ll find plenty to tempt you: stalls overflowing with sun-swollen fruit – think juicy, ripe melons, succulent peaches, bulging, red tomatoes and shiny, firm aubergines, crates of fish (often landed earlier that day on the nearby Mediterranean coast), just-baked bread and pastries, barrels of aromatic olives and bottles of fruity local wine.

This tasty stew originates from Marseille and was initially made from the rockfish that local fisherman were unable to sell to restaurants or markets. Today tourists and locals can’t get enough of bouillabaisse, which features on every restaurant menu in Marseille’s Vieux Port. Order the stew and you’ll [most likely] find at least three kinds of fish, which are usually red rascasse, sea robin and European conger. It can also include monkfish, turbot, hake and even mussels, and is cooked in a tasty vegetable broth.

Swim in the calanques

Strung along the coast between the village of Cassis and Marseille are a series of soaring sea cliffs and rocky inlets known as calanques. The turquoise-tinged waters of the Mediterranean beckon swimmers to take a dip here, with the easiest calanque to reach located in Port-Miou, less than 20 minutes’ walk from the Cassis promenade.

Provence is home to an abundance of vineyards, and is a big producer of rosé. That said, the region turns out a number of delicious red varieties, including full-flavoured Mourvèdres and Grenaches. The area around Cassis is renowned for its white wines – here top varieties include Clairette, Marsanne and Sauvignon Blanc.

The vibrant colours and light of Provence have attracted countless artists over the centuries. One of the many great artists to have been seduced by this corner of France was Vincent Van Gogh, who lived in Arles for more than year, producing some 300 works including Starry Night Over the Rhône. Some of his best-known works are on display at the Fondation Van Gogh in Arles and visitors can pick up a walking tour map of the places he painted from the tourist office. Other high-profile artists inspired by Provence include Cézanne – whose studio in Aix-en-Provence is today a museum dedicated to his life – and Matisse, whose works are displayed in the eponymous museum in the city of Nice.

Go to a festival

Summer is festival season in this part of France and there is plenty to keep you entertained. Particular include the Festival d’Avignon – a world-renowned arts festival set in the courtyard of the Palais des Papes – an opera festival in nearby Orange, les Choregies d’Orange, and a cutting-edge international photography exhibition, known as les Rencontres, in Arles.