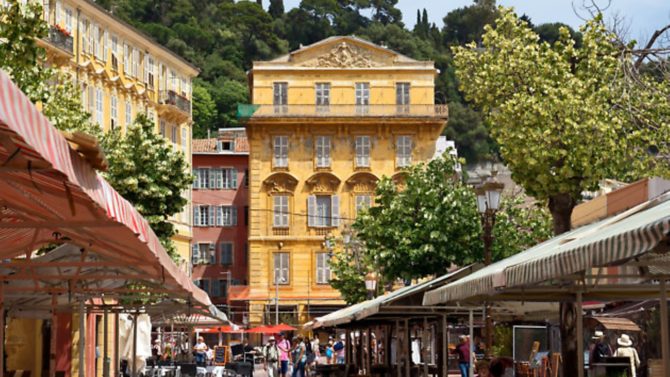 Planning a city break in France? Here are 7 French cities you should visit on a short break with more than enough attractions to keep you busy all weekend

One of the biggest and best known cities on the French Riviera, Nice is usually packed with tourists in the summer months but it is a great option for a winter city break when the tourists have gone but the sun is still shining. The seafront is full of restaurants serving seafood and Provencal specialities and the Promenade des Anglais is the perfect place for a seaside stroll with an ice cream in hand. Further inland, Nice has plenty of attractions to keep you busy – learn about the artists that were inspired by the French Riviera at the Musée Matisse and Musée des Beaux Arts, join in with mardi gras celebrations at the colourful Nice carnival or browse for souvenirs at the Cours Saleya market. You can also use Nice as a base to explore the rest of the French Riviera, either travel along the coast to Antibes, Cannes or Menton or head up into the hills and discover some authentic Provencal villages. Nice is also hosting four UEFA Euro 2016 football matches.

How to get to Nice: Nice has a large international airport with regular flights from London and regional UK airports which take about two hours.

It may not be your first thought when choosing a city break in France, but Lyon near the French Alps is one of France’s most beautiful cities with plenty of activities and attractions to keep you busy on a short city break. Known as France’s gastronomic capital, Lyon has plenty of restaurants and cafes to last you years, let alone a long weekend – try a traditional bouchon for traditional lyonnaise dishes, one of the 14 Michelin-starred restaurants or the gourmet indoor market at Les Halles. In between eating, explore Lyon’s old town (Vieux-Lyon) which is a UNESCO World Heritage site, follow the trail of trompe l’oeil murals across the city or visit a museum, we’d suggest the Musée des Beaux Arts, Institut Lumière or the Musée des Confluences. If you time your city break well, you can join in with one of Lyon’s festivals – the Fête des Lumières, Les Nuits de Fourvière – or even join in with the football fans by watching one of the six UEFA Euro 2016 matches that Lyon is hosting this summer at the Stade des Lumières or in the fan zone. Find out more about the city of Lyon in our Lyon city guide.

How to get to Lyon: Direct Eurostar from London St Pancras to Lyon takes about five hours or flights from the UK to Lyon take just over an hour and a half.

It might be a cliché, but the French capital Paris is a great destination for a city break. Whether you want to follow the tourist trail and see Paris’s iconic monuments or dig a bit deeper and find the Paris the locals know, you will struggle to pack everything into a short break. If this is your first visit to Paris then read our guide to exploring Paris in one day and pack in the sights – the Eiffel Tower, Sacre-Coeur, Musée d’Orsay and the Notre-Dame cathedral. If you want to get away from the city crowds then try sitting in a café in the bohemian Canal Saint-Martin area and watching Parisian life pass by, rent a bike and cycle around the Bois de Boulogne park or simply find a good pâtisserie and tuck into some fine Parisian treats. Even if you have visited Paris many times read our 8 reasons you should keep visiting Paris.

How to get to Paris: Direct Eurostar from London St Pancras takes just two and a half hours or flights from major London and regional UK airports take just under an hour and a half.

The wine capital of France, Bordeaux, is another popular option for a short city break. There are year-round attractions in Bordeaux and given its location in the south of France it offers some winter sunshine to visitors. The grand 18th-century architecture of Bordeaux has led to it being named an UNESCO World Heritage Site and Europe’s Best Destination. The boulevards, squares and grand public buildings are impressive to see and a city break in Bordeaux should include the sights of the Triangle d’Or, Place de la Bourse and Mirior d’Eau. If you have time during your city break then hire a bike and cycle along the edge of the River Garonne and see the newly refurbished dock area. As France’s wine capital, Bordeaux is also the place to indulge in a glass or two of French wine accompanied by a cannelé and maybe a tasting at one of the wine châteaux in the Bordeaux wine area. Read our pick to the top 10 attractions in Bordeaux for more city break ideas.

How to get to Bordeaux: Bordeaux has a large international airport and there are flights from many London and regional UK airports to Bordeaux which take around two hours.

Only two hours from Paris by train, Strasbourg is a great destination for a short city break. In the Alsace area of north-eastern France, Strasbourg is very different to other French cities with a distinct architecture and culture and there is plenty to do to fill a short city break. Strasbourg is the capital of the European Union and is therefore home to the European Parliament, Palace of Human Rights and Council of Europe. But there is more to Strasbourg than politics – explore the historic Petit France area of the city with its half-timbered houses and climb to the top of the 15th-century Notre-Dame cathedral in Strasbourg for a spectacular view of the French city. Strasbourg is another French city famous for its food and to try some traditional Alsacian specialities like kougelhopf, sauerkraut and baeckoffe go to a winstub tavern. Wash down your meal with a local Alsace wine. If you are lucky enough to visit Strasbourg in September then take the time to visit the famous Strasbourg Christmas market.

How to get to Strasbourg: Strasbourg is just two hours from Paris by train or an hour and a half from the UK by plane.

Capital of the Provence-Alpes-Côte d’Azur region, Marseille has a reputation of being France’s crime capital but in recent years the city has undergone regeneration and now offers a great option for a city break along the Mediterranean coast. Marseille was the European Capital of Culture in 2013 and it now has 21 museums and galleries including the futuristic looking MuCEM (Museum of Civilisations from Europe and the Mediterranean). As well as the new attractions in Marseille the city has plenty of history to discover – in fact Marseille is France’s oldest city, founded by Greek traders more than 2,000 years ago. Explore the old port (Vieux-Port) and climb to the Notre-Dame de la Garde basilica for commanding views of Marseille and the nearby Calanques national park. Marseille is also known for being football-mad and the city is hosting six UEFA Euro 2016 football matches in the summer.

How to get to Marseille: Eurostar launched a direct train service from London to Marseille in 2015 so you can reach the city by train in six and a half hours or flights from the UK take about two hours.

Another unusual choice, Nantes in the Loire Valley makes it into our list of best city breaks in France. You may be surprised to learn Nantes is the sixth largest city in France and is a dynamic city to visit. To learn about the history of Nantes visit the Tour de Bretagne and the elegant 18th and 19th century districts and then visit Les Machines de l’Île where you’ll find a giant mechanical elephant, a flying eagle and a three-tier underwater carousel. Nantes’ creative side doesn’t stop there either, every summer the Voyages à Nantes art installation programme invites artists from all over the world to exhibit in the open air.

How to get to Nantes: Nantes is four hours from Lille and two and a half hours from Paris by train or about an hour and a half from the UK by plane.

Fun activities for kids in France

A festive three-day trip to Nord-Pas-de-Calais

4 of the best ways to see Annecy

Our favourite 10 wine-producing towns in France