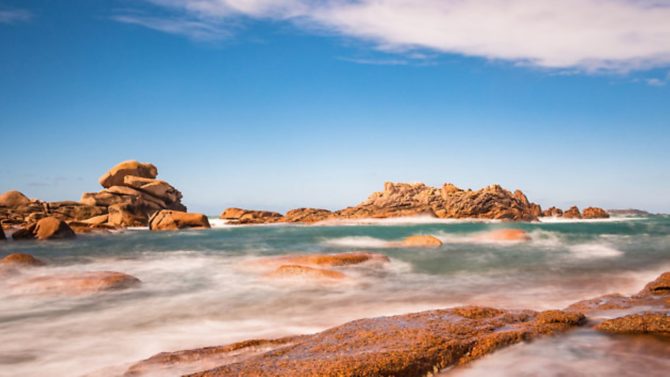 An insider’s guide to Brittany in northern France, including the main attractions, towns and villages to visit on holiday or live in, the major festivals and events, and where to buy a property in Brittany

Occupying the north-west corner of France, Brittany is a popular region with British holidaymakers and expats mainly due to its close proximity to the UK. It is easy to travel to Brittany from the UK by ferry making it a good option for a holiday or second home. Brittany also has a similar climate to southern Britain with mild winters and warm summers but not too hot. There are lots of beaches and coastal walks as well as a few busy towns and plenty of medieval villages, and property prices are below the average for France making it attractive to expats and holidaymakers alike.

Brittany was one of 6 Celtic nations and so has strong cultural links with Cornwall, Scotland, Wales and Ireland. The Breton culture is still strong in Brittany with its own regional language and regular Breton festivals with traditional music, dances and costumes.

The region of Brittany is made up of 4 departments:

Morbihan on Brittany’s southern coast is popular with sailors and wildlife enthusiasts. The capital city is Vannes.

Côtes-d’Armor is on Brittany’s northern coast and offers rugged coastline and tranquil countryside. The capital city is St-Brieuc.

Finistère is France’s westernmost region and has 750 miles of coastline. The capital city is Quimper.

Ille-et-Vilaine has only a small coastline, which includes Saint-Malo and the vibrant city of Rennes is its capital.

Ferry: Brittany is easily accessed by ferry from the UK. The ferry ports of Roscoff and Saint-Malo have ferries from Portsmouth, Plymouth, Weymouth, Rosslare and Cork.

Plane: There are airports at Rennes, Lorient, Quimper, Dinard and Brest which have seasonal flights from the UK. Nantes airport and Paris airport are within a few hours drive.

Train: Brittany is on the high-speed TGV train line and you can reach Rennes from Paris in just over two hours.

Places to visit in Brittany

The capital of Brittany is Rennes, a vibrant city with a young student population and thriving bar and café nightlife. Much of the city was destroyed in a fire in 1720 and has been rebuilt in a similar style to Paris. If you are there on a Saturday visit the morning market to stock up on some Breton food and don’t miss the striking Parliament building.

The historic town of Saint-Malo is where many visitors land in Brittany from the ferry. It is renowned for its imposing fortifications and the main attraction in Saint-Malo is ‘le tour des murs’, a walk around the massive ramparts where sentries once stood.

The other major ferry port in Brittany is Roscoff, a Petite Cité de Caractère full of boulangeries, crêperies and galleries and a classic Breton mix of half-timbered houses and granite cottages.

Another coastal town is Dinard which became a fashionable seaside resort for the Parisians, Brits and Americans at the start of the 19th century. The villas they built have been carefully preserved but the most famous sight is the blue-and-white striped tents that line the sandy beaches.

Brittany has a number of medieval towns to visit including the impressive fortified town of Dinan. It has a maze of cobbled streets which look out over the River Rance.

Quimper is the ancient capital of Cornouaille and the cultural heart of Brittany. It celebrates its Breton culture with a festival every summer.

Other charming old-world towns to visit are Locronan and Pont-Croix which have remained untouched for centuries, and Morlaix and Concarneau.

Most people visit Brittany to explore the spectacular coastal scenery and with nearly 3,000km of coastline then is plenty to explore! The dramatic Pink Granite Coast (Côte de Granit Rose) runs from Louannec to Plestin-les-Grèves, 28km away and boasts secret coves, scenic coastal walks and sandy beaches. The best known, and one of the most striking, beaches along the Pink Granite Coast is Ploumanac’h. This pretty seaside village was voted France’s favourite village in 2015 and there is the romantic Château de Costaérèsas and famous pink granite lighthouse to discover.

As well as a dramatic coastline Brittany has a number of islands just off shore to be discovered. Belle-Île-en-Mer is the largest island in Brittany and has a wild, rocky coast, sandy beaches and a pretty capital town, Le Palais, with shops and restaurants. The islands are a haven for wildlife and exotic plants. Île de Batz has more than 2,000 exotic plants in the Jardin Georges Delasselle, the Île de Groix is an exceptional nature reserve and the archipelago of Ouessant and Molène is classified as a biosphere reserve by UNESCO. Find out more about Brittany’s islands: 10 beautiful French islands to visit and explore

Things to do in Brittany

Brittany has many fêtes and festivals, mainly during the summer months, but the largest and best known are the Festival Interceltique in Lorient and the Festival de Cornouaille in Quimper. Both of these festivals celebrate the Breton culture with traditional music and Fest Noz dances. There are also seafood festivals such as the Fête de la Coquille Saint-Jacques (scallop festival) in Saint-Quay-Portrieux, Loguivy-de-la-Mer and Erquy.

With such a long coastline, Brittany has an abundant supply of seafood, including oysters from Cancale, and scallops. Brittany’s most famous dish has to be its pancakes. The savoury pancakes are called galettes, made with wholemeal flour and often filled with ham, cheese and eggs, while the sweet pancakes are called crêpes, made from white flour and filled with cream, chocolate and fresh fruit. Cider is the local drink or wine from the nearby Loire Valley.

If you enjoy sailing or boating, or just want to give it a try, then Brittany is a good place to visit. Serious sailors test their skills in the Gulf of Morbihan and there is a choice of canals for cruising, including the Canal de Nantes à Brest.

Brittany is a great area for outdoor enthusiasts, especially hikers who can try the GR34 (grande randonnée) route that encircles Brittany, one of the many coastal paths or the Parc Naturel Régional d’Armorique, Brittany’s only regional park and home to the peaks of the Monts d’Arrée. If you fancy a more enchanting walk try the Forët de Brocéliande, the forest of King Arthur.

Brittany is a relatively affordable region for property – the average resale price is around €148,000 compared to the national average of €157,600 – but prices obviously vary depending on the area you are looking to buy a property in.

Finistère is the second cheapest department with an average property price of €138,000. Finistère appeals to outdoor people with its wild rugged coast and tranquil countryside.

Morbihan is quite a bit more expensive with an average property price of €160,000 due to its popularity with holidaymakers and retirees and the presence of several popular towns, including Vannes.

Ille-et-Vilaine is the most expensive department in Brittany with an average property price of €175,000 because it is home to two popular towns – the capital of Brittany, Rennes, and the harbour town of Saint-Malo.

Properties close to the coast are more expensive as are the major towns – some of Brittany’s most expensive areas are Saint-Malo, Vannes, Lorient, Brest and the capital city Rennes which all have average property prices over the average for Brittany.

Properties further away from the Brittany coast and in the countryside are cheaper – some of Brittany’s cheapest areas are Guingamp, Pontivy, Morlaix and Châteaulin where average property prices are below €120,000.

The traditional property style in Brittany is the Breton longère, a rectangular house built from granite with a slate or thatched roof most often found in the countryside. You will also find half-timbered properties and stately homes.

To find out more about Brittany visit www.brittanytourism.com

5 reasons why Brittany is so desirable to British buyers

A family holiday in Brittany

Previous Article 7 exciting French cities to visit on a weekend break
Next Article What is the cooling-off period after buying a French property?