A weekend in Saint-Jean-de-Luz in French Basque Country 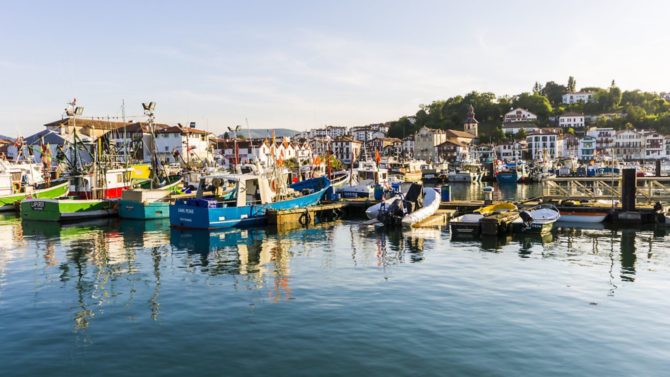 Enjoy a stylish, seaside break at this popular resort in Pyrénées-Atlantiques in south-west France

Waking up to the sound of the Atlantic Ocean crashing against the cliffs a short distance from your room is an exhilarating way to start the day.

I was staying at La Réserve, a four-star, family-owned hotel which sits high above the popular fishing town of Saint-Jean-de-Luz on the south-west coast. It enjoys an idyllic position surrounded by lush parkland, palm trees, tulip-filled flowerbeds and a breathtaking view of the sea with wild Atlantic waves rolling towards the shore.

From here it’s only a short walk into Saint-Jean-de-Luz, winding your way down the hill at Sainte Barbe with the impressive Grande Plage stretching out before you. The long sandy beach is one of the most popular on this stretch of coastline in Pyrénées-Atlantiques and perfect for families as it is protected from the ocean by sea walls which break the powerful waves.

The promenade and beach is popular all year round and the perfect place for a stroll while taking in the uplifting view of the bay and inhaling the bracing, salty sea air.

The beach’s proximity to the town centre is also a big draw, with boutique and restaurant-filled streets located just behind the shoreline. Among them is Deuza, a tea and coffee shop which is celebrating its 100th anniversary this year and supplies many Michelin-starred restaurants in the area. Its walls are filled with jars containing an impressive range of blends alongside black and white photos from its past. Also worth popping into is Maison Pariès in Rue Gambetta which sells delicious, prettily wrapped caramels called Kanouga as well as the famous Gâteaux Basques made from golden pastry, almond cream and black cherry jam.

Around almost every corner there are upmarket shops selling everything from glossy chocolates to espadrilles, pottery and Basque studded leather.

For more local delicacies head to Les Halles de Saint-Jean-de-Luz which has been in existence since the 19th century and is open every day from 8am to 1pm, spilling out into the surrounding streets on Thursdays and Fridays.

Here you’ll find plenty of local Basque producers, from France as well as Spain. Fish is the star of the show with tuna, sardines and merlu de ligne (line-caught hake) plucked straight from the ocean – Saint-Jean-de-Luz is the sixth biggest port in France. Also for sale are around 150 different types of cheeses sold by artisan fromager-affineur Beñat as well as a colourful array of fresh fruit and vegetables.

After a tempting visit to the market and a morning stroll, it was time for lunch. A short drive around the harbour brings you to Ciboure which is dotted with old stone and timber-framed houses. On an unassuming street is Restaurant Chez Mattin, a third generation restaurant which hasn’t changed since it was opened in the 1970s.

Originally beginning life as a shop, hungry fishermen soon started to demand food and its spécialité maison is ttoro – a Basque stew made from several different types of fish flavoured with Piment d’Espelette (Espelette pepper).

Emerging from its cosy, rustic interior, we headed back down to the harbour at Saint-Jean-de-Luz where boats bob up and down on the water with striking white and red houses in the background.

Also near here is Maison Louis XIV, an impressive 17th-century house where the young monarch lived for a month before marrying Maria Theresa of Spain in 1660 at Saint Jean the Baptist church in Saint-Jean-de-Luz. The elaborate church has 1,000 seats and is one of the largest in the area, with sky-high wooden balconies.

Heads swirling with history and a new appreciation of Basque culture, we headed back to La Réserve which has a heated infinity pool where you can do a few gentle laps while taking in those energising sea views, or retreat to the wellness area for a soothing treatment with French skincare brand Institut Esthederm.

In the evening, the hotel terrace is the perfect location to watch the sun go down with an apéritif before heading inside to Ilura restaurant. Head Chef Pierre Boffo’s menus showcase traditional Basque Country flavours with dishes including lieu jaune de ligne (line-caught pollock) with asparagus, delicate buckwheat with blood orange or Galician beef fillet with sautéed mushrooms. Desserts range from prettily plated chocolate hazelnut praline to citrus fruit with grilled seeds.

As well as the main hotel, La Réserve has 44 modern apartments and studios with terraces facing the sea. Some have kitchens making them a great self-catering option.

After a buffet breakfast, we made our way back to Biarritz Airport via Le Port de Guéthary, which used to be a centre for whaling in years gone by, but is now surfing territory home to a trendy surf shop and restaurants.

On a fine day the views of Biarritz in the distance are breathtaking, along with the Pyrénées and even San Sebastián in Spain.

Although it was reluctantly time to leave, the spectacular sea vista and wholehearted Basque hospitality will stay with you long after your visit.

Lucy flew to Biarritz from London Stansted with Ryanair. One-way flights from £9.99. ryanair.com

Stunning clifftop hotel with views of the Atlantic Ocean, just a 10-minute walk from the beach. It reopens for the season on 17 June 2020. From €145 per night (not including breakfast).

Delightful traditional restaurant in Ciboure which specialises in Basque cuisine including ttoro, a hearty fish stew for €26. Shut Sunday and Monday.

Sells a range of exquisite pastries and cakes, as well as the Mouchou made from fresh almonds.

This family business makes colourful pots for the garden or home. From €20.

Magnificent house once owned by one of the richest ship-owning families of the 17th century. Open April to November. Entry €6.50.

How to spend a weekend in Arras

How to spend a weekend in Lourdes