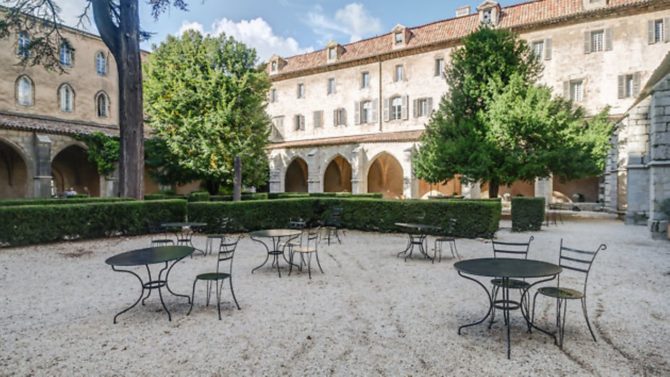 Want to enjoy a special night in France without breaking the bank? Here are 14 hotels that are all under €150 a night

Sleep in sacred serenity at this 13th-century converted convent that backs on to the Gothic basilica of Saint-Maximin, in La Provence Verte. The 67 rooms and suites, once occupied by Dominican friars, overlook the manicured gardens and arched galleries of the cloisters. Rooms are rich in historic character too, all tiled flooring and four-poster beds, and an atmospheric restaurant occupies the former chapter house.

Les Acanthes offers three B&B bedrooms and one apartment in an ivy-covered townhouse 15 minutes’ walk from Marseilles’ Vieux-Port. The rooms are infused with Mediterranean warmth while the leafy garden and sun-drenched terrace feel a world away from the buzz of the city.

You can’t get much closer to the sea than at Le Landemer, which is perched at the end of a beautiful beach on the Cotentin Peninsula, only 10 kilometres from Cherbourg. Its 10 bedrooms all have a sea view, with the four superior rooms housed in the longère to the side, each with a sea terrace and a private garden at the back. The restaurant is in the conservatory, and also enjoys spectacular views.

This hotel is located in a pedestrianised street off the Place du Capitole in Toulouse, the hub of la ville rose, and makes a trusty, good-value option. The staff are friendly and although the rooms are basic and modestly sized they are fine for city breakers who are out most of the time exploring. The self-service €9 breakfast is adequate but it can get busy, so unless you’re leaving first thing, treat yourself to a coffee and croissant in a café under the arcades of the Place du Capitole.

Tucked between the royal château of Amboise and the River Loire, this luxury B&B was once the town’s library. The 17th-century townhouse has been transformed into a chambre d’hôtes with 4 rooms, each with amazing views. The decor is a tasteful blend of neutral tones and occasional splashes of colour, with beautiful paintings and objets d’art from around the world. Breakfast is a friendly affair, as guests gather around the dining room table; the perfect place to compare notes on Amboise and the Loire châteaux.

Doubles from €145 a night, breakfast included

This three-star hotel near Lille’s the railway station is full of old-world charm with its rustic wood furnishings, cosy breakfast room and friendly staff. The 62 bedrooms are all individually decorated and some offer stunning views over Saint-Maurice cathedral. Two more modern apartment flats are also available.

Castles don’t come more fairy-tale than the Château de Prye, with its turrets, towers and moat. Once the residence of the Queen of Poland at the end of the 17th century, the château has a long history as a residence for royalty and the aristocracy, and its current owners, the Marquis and Marquise du Bourg de Bozas, continue the tradition while running it as a chambre d’hôtes. The five rooms are vast and decorated with elegant fabrics and antique furniture.

The Chez Dupont restaurant is an institution in Bordeaux and in an 18th-century building opposite, the owner rents out five bedrooms and an apartment which make a perfect resting place after a meal. Bare limestone walls and stairways contrast with colourful furnishings.

With stunning views of the chalky Étretat cliffs, it’s easy to see why this ivy-strewn, Anglo-Norman castle once attracted the likes of Claude Monet and Marcel Proust as guests. The belle-époque building has 21 rooms, each individually furnished and with their own personality. The restaurant, spa and swimming pool complete with four-poster sun loungers seal the deal.

Only 25 minutes from Caen, this stylish hotel in the centre of Bayeux is set in a former mansion house. It has just four bedrooms, all spacious and elegant, with high ceilings and marble fireplaces, and two have fabulous views of the cathedral. Inside the mansion’s central courtyard, guests can relax and admire the fruit trees and the kitchen garden.

In the heart of the Normandy port of Le Havre, among Auguste Perret’s now Unesco-listed post-war architecture, the Hôtel Vent d’Ouest lives up to its maritime connections, and many of the 35 rooms have seaside and seafaring themes. The spa has a steam room and Spa Nuxe treatments.

It is just a couple of hours’ drive from the ferry port of Saint-Malo, but with the Indian influences in its rooms and spa, this hotel in Vannes transports you much further. The bedrooms represent different stopovers the Breton sailors would have made on the Spice Route and are equipped with everything you need for a relaxing stay. The spa specialises in Ayurvedic techniques to balance the mind, body, senses and emotions, and offers various all-inclusive packages.

This small hotel is perfectly placed if you want to explore the cities of Carcassonne, Albi and Castres in south-west France. The imposing, former family home contains five well-appointed bedrooms, providing an intimate atmosphere and everything needed for a luxury stay. The villa offers a ‘Petit Spa’ in the converted wine cellars where there is a sauna, wet room and whirlpool bath.

As the name implies, this hotel, spa and wellbeing centre has been built in a clearing, which lies in woodland on the slopes of a hillside in the Northern Vosges regional nature park in Alsace. Fresh air and a peaceful environment complement the detox and de-stressing treatments, yoga and meditation offered in the spa.Most of the 50 rooms have balconies overlooking the woodlands and are decorated in contemporary style using wood and organic fabrics.

6 romantic places to stay in France

Family-friendly places to stay in France