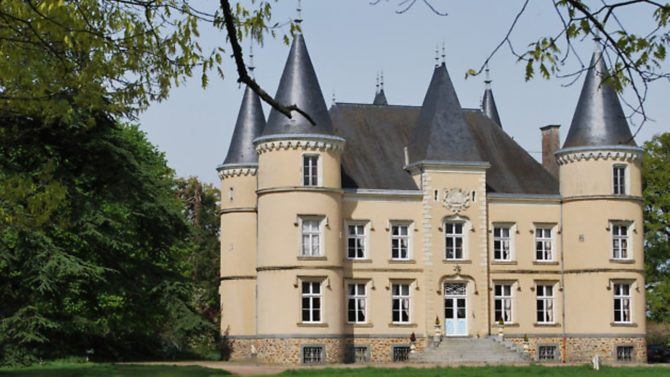 At the end of a driveway lined with chestnut trees, the turrets and imposing façade of the Château d’Henri are set in splendid isolation. The castle, built during the 1850s in a neo-Renaissance style, has lavish interiors full of echoes of the past – from the music room’s 16th-century stone fireplace, baby grand piano and Napoléon III furniture to the oak-panelling and marble fireplace of the Salon Bois. Old-world grandeur is softened by pretty décor – you’ll find flowing drapes, floral wallpaper and eclectic ornaments. The six stately bedrooms each have their own style and feature either four-poster or canopy beds. Modern touches include a designer kitchen with adjoining breakfast room, and a home cinema room. The 12 hectares of grounds, about 25 kilometres south-east of Mayenne’s capital, Laval, are populated with centuries-old trees and feature a swimming pool, barbecue and spring-fed lake in which you can fish, canoe or simply splash around.

Geared towards families, the chambre d’hôte run by former lawyers Patrick and Colette offers all the practical help you need when travelling with little ones (be it high chairs, cots, nappy-changing paraphernalia) as well as the entertainment that makes a holiday special. In the 35 hectares of parkland that surround the château, children can follow nature trails, play outdoor games, swim in the lake and simply explore. Inside, the five suites offer stylish furnishings and a catered stay, while the additional three holiday cottages in the grounds are available for self-catering (although these can be catered too, if you wish). With so much on hand to enthral your children, there’s little chance of idle hands finding mischief.

Rooms from €120 including breakfast

Read more: 14 stylish hotels in France for under €150 a week

If you’re looking to host a special group holiday for up to 30 people, then Château de Clauzure should fit the bill. The 14 bedrooms – ten in the château and four in the gatehouse – are decorated in calming neutral colours with antiques and classic rugs. With two salons, a dining room, TV room and kitchen, there is plenty of space for everyone. Surrounding the château, which was built in 1820, there are four hectares of parkland with a number of mature trees, large lawns, and an enclosed swimming pool; the perfect place to relax after a day exploring the surrounding villages, markets and châteaux of Dordogne and Charente.

This lovely self-catering château, close to the rose-filled village of Chédigny, makes a perfect base for exploring the royal châteaux of the Loire. Located between Loches and Amboise, it’s a short distance from Chenonceau and also lesser-known attractions such as Château de Montpoupon and the Pagode de Chanteloup. The château itself is the pride and joy of Roxanna McDonald, who rescued it from near-ruin and now offers a self-catering holiday home that sleeps up to eight, with room for six more in the annexe. For those who love history, it is a real treat, with antiques and objets d’art as well as framed artefacts including the original signed 17th-century oath of allegiance to the local seigneur. The Napoléon room also has some additions for the 2016 season, including a print of old Boney retreating at Waterloo.

Opened in 2016 after a €25 million renovation that took two years, this wine château hotel has 36 self-catering properties in its splendid grounds. Just north of Béziers, the château has eight spacious bedrooms, along with a stylish bar and restaurant, while guests can also enjoy the infinity pool, spa, tennis court and pétanque piste. Families will be well looked after with the kids’ club, barbecue area and a babysitting service. The pièce de résistance, however, is the château’s state-of-the-art winery, where winemaker Laurent Bonfils will make his iconic wines to rival the area’s best. The project is the work of Bonfils and Karl and Anita O’Hanlon, who have already found success with a similar property, Château les Carrasses, so this promises to be an exciting destination for both families and couples alike.

The name of this wonderful castle denotes a tenuous link to Antoine de Saint-Exupéry, who wrote Le Petit Prince, and what is certain is that guests who rent the property will feel like princes (and princesses) themselves. With five prettily decorated bedrooms, and four bathrooms, there is plenty of space for a large family or group of friends to spread out. Meanwhile, the two cosy sitting rooms and grand dining room (complete with vaulted ceiling) are the perfect places to spend evenings. The exterior of the château is impressive, with the turret and tower standing proudly over the courtyard, gardens and park, while the swimming pool is ideal on a hot summer’s day.

High in the Pyrénées near Prades, not far from the Spanish border, Château de Riell offers a real escape. There are 19 rooms and suites in total, in the château itself and in cottages in the grounds. All are beautifully decorated, with toile wallpaper and antiques in the classic rooms, and more globally inspired themes in others. The château has its own spa, with baths created from rare green, ivory, black and amber marble, so guests can take advantage of the benefits of the thermal waters characteristic of the Pyrénées. If that wasn’t relaxing enough, then the beautiful gardens that overlook Mont Canigou, the Out of Africa safari-styled bar and Russian dacha (perfect for breakfast) are ideal places to switch off.

This 15th-century château forms part of the city walls of Haut-de-Cagnes, and will be a favourite among art-lovers. Not only was the village an inspiration to artists such as Pierre-Auguste Renoir, but the château itself boasts some impressive works of art as part of its decor. In 1928, the Guard Room was painted by artist Émile Wéry, a friend of Henri Matisse, who brought a touch of the exotic in his frescoes of elephants and the orient. In 1968, the restaurant’s famous retractable roof was created, and in 1986 its 200 panels were hand-painted by the famous architect Philippe Roberti. The four-star hotel was completely renovated in 2012, and has 28 rooms and suites, each named after a famous artist. All rooms feature elegant decor with wooden beams and antique furniture – and have sensational views of the surrounding area. Nearby are the equally inspirational locations of Saint-Paul-de-Vence and Nice.

Read more: Hotels on the Côte d’Azur for all budgets

Who said a château had to be old, or even made of bricks? This new floating wooden ‘château’, which sleeps two, is an addition to Châteaux dans les Arbres’ collection of treehouses near Bergerac and, like the four that are suspended in the trees, it boasts turrets, a terrace and its own hot tub. The interior is beautifully decorated with seaside-themed accessories, while the king-size bed, coffee machine and iPod dock make sure you will relax in style. Dinner and breakfast can be delivered to your cabin, and the site also has a heated infinity pool, table tennis table, boules pitch, bicycles to use and a treetop terrace with panoramic view.

Check into this turreted château that can trace its origins to the 13th century and you will be in a prime position to enjoy some of the Lot’s finest wines. For more than 30 years, the château’s owner Georges Vigouroux has been a pioneer of the malbec grape and the new generation of Cahors wines. The winery and cellar are built under the château’s terrace, where guests can taste the prestigious wines. The hotel itself has 30 rooms and suites within its 17th-century walls as well as an excellent restaurant serving the best of local produce, including duck, lamb and black truffles.

Further downstream from the Dordogne Valley’s most famous attractions is the pretty village of Lalinde, which offers a vibrant market and great views of the river. One place to enjoy the latter is the charming B&B Château Lalinde, set in a castle that dates from 1269. Its five rooms vary in size; those in the rafters are cosy and reached by a spiral stone staircase, while others have balconies and views, and one even has a dinky sitting room in the turret. Breakfast is a treat, with breads and pastries, wile owner Wilna Wilkinson serves up meals with a South African twist at dinner time. With a warm welcome and its own swimming pool, Château Lalinde makes a great base for exploring the area around Bergerac.

Rooms from €200 including breakfast

Perched on a cliff above the River Dordogne near the village of Lacave, Château de la Treyne makes for a fairy-tale destination. Its white turreted facade is iconic in the area, and a dinner on its terrace, with one-Michelin-star cuisine from chef Stéphane Andrieux, should be on everyone’s bucket list. Inside, its 17 rooms are each decorated in individual style, some floral, some classic, with all mod cons alongside the beautiful antique furniture. The stunning rose garden is surrounded by peaceful parkland, and hidden from view are a large swimming pool and tennis courts. With all this and a warm welcome from owners Stéphanie and Philippe Gombert, you can be assured of a holiday fit for a king.

Dating from the 18th century, the five-star Château la Chenevière offers 29 spacious and individually styled rooms, many with fireplaces. Set in 12 hectares of parkland just inland from the Normandy coast, the hotel has a pretty walled garden, a heated outdoor pool (set next to a beautiful glasshouse) and a tennis court. Its vegetable garden supplies the restaurant, which is in keeping with the hotel’s environmental policy, which also sees it actively saving water, recycling and bee-keeping. Just 20 minutes from Caen ferry port, it is close to Bayeux and the D-Day beaches.

Previous Article Dordogne or Lot: which one should I choose?
Next Article WIN! A copy of An Art Lover’s Guide to the French Riviera