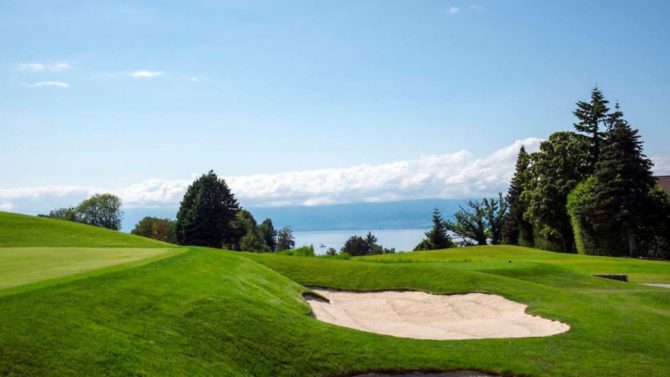 Inspired by the Ryder Cup? We’ve rounded up some of France’s top courses where you can put your golf skills to the test

One of France’s oldest courses, dating back to 1904, the Évian Resort Golf Club enjoys unrivalled views across the tranquil shores of Lake Geneva. The fast-playing greens and tricky putts offer amateurs a first-rate challenge. Each year, the best of the women’s golfing world take to the course for the Évian Masters, which boasts the sport’s second-biggest prize pot of $3.85m (nearly £3m).

Some say the renowned Spérone course is worth the trip to Corsica alone. It’s the island’s only 18-hole course and opened in 1990, having been designed by the famous Robert Trent Jones Senior. A small but tough course, you’ll hear it called the ‘Pebble Beach of Europe’ as its 12-16th holes are similar to some of those on the celebrated Californian course.

This private course was the brainchild of Baron Marcel Bich, of Bic pens fame, who built it with a friend at his hunting estate for the exclusive pleasure of their friends and family. That meant until 2008, when the estate was sold to a consortium of mainly English investors, very few people had teed off on its hallowed turf. These days it’s tricky but not impossible to get the chance to play here. It’s home to one of the biggest putting greens in Europe which is topped by a Rodin sculpture.

The closest golf club to Paris, the Saint-Cloud course boasts a glorious view of the Eiffel Tower from the 8th hole of the vert course and 18th hole of the jaune. In 1924 it hosted the Olympic Games and nowadays attracts the crème de la crème of French golfers every year to Le Grand Prix de Saint-Cloud. Non-members are welcome during July and August.

Regarded as one of Europe’s most beautiful courses, the Kempferhof is sheltered in a large forest near the Rhine; due to its proximity to the European Parliament, it’s also a popular choice for bureaucrats. With plenty of water hazards to keep an eye out for, accuracy and attentiveness are crucial to a successful round on these tree-lined fairways.

Combine a trip to the wine mecca of Bordeaux with a visit to this renowned club, home to Les Châteaux. In a charming touch, each hole on this challenging 6,800 yard course is named after one of the Médoc vintages. It is the only European design from architect Bill Coore and as such, has a distinctly American feel.

This petite course, by prolific English designer Jeremy Pern, was one of a dozen he created in France between 1986 and 1994. Since its inception, the course has matured into one of the best in the south-west. It’s flanked by the River Tarn, with some holes running alongside the water, and close to the striking Sainte-Cécile Cathedral.

Another long-established club, founded in 1887 by a small group of British settlers, Golf de Dinard was designed by the renowned Scottish course architect Tom Dunn. With views of lighthouses, cliffs and the wild Atlantic waves, this coastal course is small in size but unrivalled in setting. At the 13th hole, you even get to tee off from a concrete Second World War bunker.

This is a coastal course with a turbulent history; during World War II, it was wrecked by the Germans, who took over the adjoining hotel. Now it’s been restored to its former glory and golfers flock here, charmed by the pleasant mixture of pine forest and treeless links holes.

The newest course on our list, inaugurated in 2015, is situated on a former hunting estate and designed by prolific American architect Tom Doak. Doak’s minimalist style means that the course has been kept as true to its natural form as possible, with just 35 bunkers.

The popular seaside sporting resort of Hardelot, planned as a halfway house between London and Paris, boasts two fantastic golf courses: Les Pins and Les Dunes. The dense wooded course of Les Pins, designed by renowned British designer Tom Simpson, is the older of the two and has a very English feel thanks to its creator.

Another Simpson design, this sandy course is known as one of the game’s great classics. The trees that line the fairways are ancient – one was even said to have been planted by Louis XIV. Nature lovers should look out for the deer that roam the area.

Last but by no means least is this year’s Ryder Cup host, boasting three impressive courses near Versailles. The championship course is the 18-hole Albatros, which has hosted the French Open every year but two since opening in 1991. There is also Aigle, a less-challenging 18-holer, and Oiselet, whose 9 holes are perfect for beginners.

Got Ryder Cup fever? You’ll want to read our writer Adam Ruck’s Ryder Cup preview, where he tried out the Albatros course.