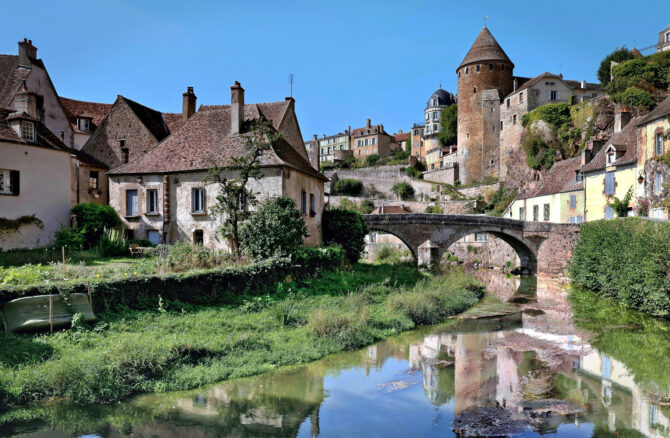 A historic region of east-central France, best known for its wines including eponymous Burgundys as well as pinot noirs and Chardonnay, Chablis and Beaujolais, Burgundy is a popular place for visitors thanks to its châteaux-studded landscapes, network of canals and luxury hotels. From the Palace of the Dukes in Dijon to the Musée des Beaux-Arts, there are plenty of things to see and do, or simply enjoy roaming around in the countryside and tucking into the superb food and drink. Here, the Good Hotel Guide shares 10 of their top hotels in Burgundy.

In the Morvan nature reserve in southern Burgundy, Chateau de Villette is an elegant 16th/18th-century château turned chambres d’hôtes. The elegant property welcomes you into what almost feels like a private home, treating you like personal guests. Interiors are traditional but complete with modern comforts, and honour the heritage of the estate. The owners’ chocolate Labrador will happily guide you on walks close by, exploring the countryside and spotting wildlife including roe deer. Dinner is a set five-course menu served by candlelight, breakfasts are a feast and if you really want to go all out, it’s an excellent place for a party.

In a ramparted mediaeval hamlet on a hilltop west of Dijon, Hostellerie du Chateau is an old hostelry with impressive countryside views. Pretty as a picture, the property features historic details like beamed ceilings, flagstone floors and rough stonework. Interiors are peppered with tapestry rugs and antiques. It has a pretty garden where flowers adorn the patio and where you can sit outside to eat if the weather permits. The property is understated but the service is immaculate – a charming place to stay while you explore the region.

On the tree-filled main square of this famous Burgundy wine village 12 km from the beautiful city of Beaune, Le Montrachet is an old hostelry that was renovated in 2014 to offer contemporary style and service. The retreat is well-known for its food as chef, Luc Filoé, has a Michelin star, and consequently dinner in particular is a delight. The wine list is vast – in fact one of our reviewers described the list of white Montrachets as being “telephone-directory size”. A particularly charming feature is sitting in the lounge by the fire and sampling one of the 16 wines by the glass.

A Relais & Châteaux property, Le Relais Bernard Loiseau is a famous Burgundian restaurant-with-rooms serving exceptional food. An elegantly converted old post hotel, it is now run by Dominique Loiseau, the widow of its founder, and everything is done with care. Staff are attentive, interiors showcase local materials (stone, tiles and wooden beams), fireplaces are vast and there are distinctive antiques and furnishings throughout. There is a charming ‘jardin à l”anglaise’ with a small swimming pool, and it’s easy to while away the day. Dinner is the main event, with two dining rooms overseen by chef Patrick Bertron who retains the three Michelin stars, 17 Gault Millau points awarded to the late Bernard Loiseau.

Another Relais & Châteaux property, La Côte Saint Jacques is a glamorous hotel on the banks of the Yonne. Manager/chef Jean-Michel Lorain has two Michelin stars for inventive dishes, and the wine cellar has over 25,000 bottles, so once again food and drink are very much a central feature of the experience (children have their own menu and babysitters can also be arranged). Rooms at the five-star hotel are a modern take on traditional style, and some of the suites have a hot tub as well. A world of its own, there’s an indoor pool opening onto the garden, a spa and even a boat for river trips.

Close to Beaune, Château de Bellecroix is the former residence of the Knights of Malta and looks like something out of a fairytale. Complete with turrets and an ivy-clad exterior it dates to the 12th-century although much was rebuilt in the 19th-century. Located in its own lovely park, the hotel is unequivocally romantic, with details including a pretty ornamental pond and a sizable swimming pool. Dinner is served in a panelled dining room complete with a large fireplace, and where tables are dressed with white linens and flowers. Rooms are split between the main building and the annexe, some even have four-poster beds.

The most famous hotel in Burgundy’s wine capital, Hotel le Cep is consistently praised by visitors for its excellence. A predominantly 17th-century building, it offers the best of old and new, with a beautiful spiral stairway, a mediaeval courtyard and the gravitas of time gone by, alongside modern hospitality. The Michelin-starred restaurant, Loiseau des Vignes, is located on the hotel property but is managed separately by the Bernard Loiseau restaurant group, while the hotel itself serves breakfast in the vaulted former wine cellar. In 2016 they added a luxury spa, which really is the cherry on top of the whole experience.

Hostellerie Bressane is an understated restaurant-with-rooms offering a peaceful night’s sleep, reasonable prices and an excellent location for exploring Burgundy. Run by a husband and wife team, rooms are split between a bungalow and the main building. The gardens are full of flowers, which you look out over while enjoying meals in the semi-conservatory dining room or outside under a 200-year-old plane tree. The village is known for its literary heritage, holding a book fair on the first Sunday of August and September, and brimming with bookshops. They even have their own ‘Eden Project’ close by, dedicated to the nature and environment of Burgundy.

An exquisite, 13th-century castle in the heart of the Mâconnais region in southern Burgundy, Château d’Igé was built in the reign of King Saint-Louis, in 1235, and has been tastefully renovated to become the four-star hotel it is today. Surrounded by a four-acre park complete with a spring, a rose garden, a stream, a small bridge, an orchard and many ancient trees, it’s a world unto its own. There are 10 rooms and seven suites in total. Circular suites are in the turrets of the property, rooms are richly decorated with details such as vaulted ceilings, canopy beds, period fireplaces. Days can be spent lounging by the pool, roaming the gardens, and, of course, enjoying the regional food and drink including favourites like trout from estate, AOP Bresse poultry or Charolais’ rib steak.

In a quiet location amongst the Burgundy vineyards, around 10 km from Dijon, Castel de Tres Girard is an impressive 18th-century manor house in a former wine press. Rooms at the four-star hotel are grand and enjoy views of the surrounding vineyards, with the style throughout creating a sense of cosy charm alongside modern comfort. Food and drink are a favourite feature, with the restaurant specialising in traditional Burgundian cuisine such as fricassee of snails with tarragon and parsley mousse. There’s also a pretty swimming pool within the grounds where you can while away the days in the sunshine.

Previous Article Cruise the French Riviera aboard ‘Les Bateaux Verts’
Next Article Get a VAT refund on everything you buy during your trip to France with ZappTax!