10 of the most beautiful hotels in France 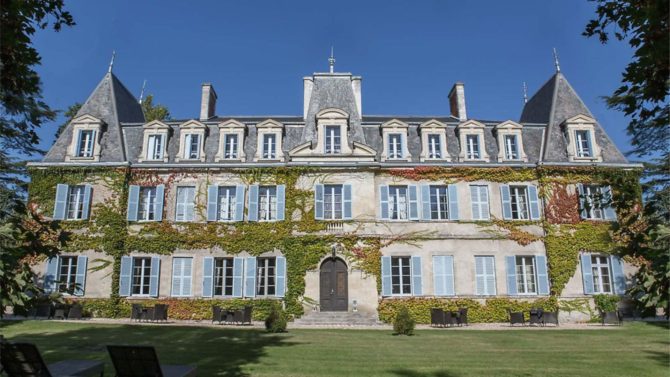 Fancy treating yourself with a night in an amazing French hotel? Here are 10 of the most beautiful hotels in France to stay in

From the charm of Paris to the romance of a country château, France has no shortage of beautiful hotels to escape to. Michelin-starred restaurants and historic details abound in hotels that range from elegant to bohemian, city to country and all the way to the magnificent Côte d’Azur. The Good Hotel Guide has chosen 10 of the most beautiful hotels in France from their 2018 collection…

The traditional Château de Lalande is surrounded by woodland, just 12km from Périgueux and is in a great location for exploring Dordogne. The hotel has been decorated in impeccably good taste and is all about charm and elegance with toile hangings on the wall in lieu of wallpaper and antique furnishings throughout, while outside there is a beautiful swimming pool.

A beautiful Renaissance château standing in its own lovely park on the eastern edge of Alençon in Normandy, Château de Saint-Paterne is romantic, quirky and charming. Salons are filled with antiques, paintings and family artifacts while an open fire burns in the winter months. Each of the rooms has its own story to tell, such as one where the beams were decorated in the 16th century with the crest of Henri IV and his paramour Diane de Courtemanche. You can enjoy woodland walks, a large potager and the swimming pool within the château grounds.

Housed in a 17th-century mansion, Hôtel d’Aubusson is in a great location in Paris, within easy walking distance of the Louvre and Notre Dame. The hotel rooms are immaculate with traditional French flowered fabrics and soothing shades, and if you’re lucky enough to get a top floor room you can enjoy views of the iconic rooftops of Paris. The grand salon has a magnificent beamed ceiling, the breakfast room is hung with tapestries and there is a patio with a fountain where drinks are served in fine weather… the hotel oozes romance no matter when you visit.

A small but elegant hotel in the trendy Marais district, Hôtel Caron de Beaumarchais is named after the French playwright Pierre-Augustin Caron de Beaumarchais, author of Le Marriage de Figaro, who lived in the neighbouring building. In keeping with its history, the hotel’s décor is in 18th-century style with a Mozart theme and there’s an operatic vibe throughout.

Found in the foothills of the craggy Dentelles de Montmirail mountains, the old-fashioned Hôtel Le Florets is in a superb setting high in a wooded valley near the village of Gigondas. A warm welcome and a backdrop of richly scented lavender fields greets you, and you are near some of the best Côtes du Rhône vineyards – it’s everything you would expect from the holiday in Provence. The hotel’s style is relaxed and welcoming for all members of the family.

10 treehouses in France that you can sleep in

In a tiny hilltop Provençal village, this smart Relais & Châteaux hotel is composed of eight 16th/17th-century houses along a winding lane. From this vantage point you can enjoy views across orchards, vineyards and olive groves and the hotel’s their four-course Menu du Saison and a seven-course Menu de Chef are the stuff of legend. A number of rooms have a balcony facing the mountain, while others have views of the valley or Mont Ventoux. In short, it’s charming.

Château d’Étoges is a stunning 17th-century château complete with a pepperpot tower and moat with swans. With its marble staircase, statues and wood paneling, the château has a royal ambience and it is easy to imagine French kings staying here. Rooms in the tower enjoy far-reaching views and there is well-regarded restaurant set in The Orangery.

Beautifully restored, Manoir de la Hazaie is a warm and welcoming stone-built manor house just 10 minutes from the coast. The bedrooms are individually named and within the grounds is a watermill by a lake, fountains, a medieval garden, and a large swimming pool with ‘aqua-musique’. It is quiet, peaceful and supremely welcoming.

Hotels in Provence for all budgets

On the island of Porquerolles, the largest and most easily accessible of the three Îles d’Hyères, Le Mas du Langoustier sits amongst wooded cliffs and sandy beaches, pines and eucalyptus trees in its own large park. The hotel oozes luxury with its Michelin-starred restaurant and Provençal style, swimming pool, tennis courts and a 100-metre strip of sandy beach nearby that is managed by the hotel.

A remarkable, quirky and artistic escape, Cour des Loges is made of four adjacent Renaissance mansions. You’re greeted by a magnificent atrium with dark red cloisters and stunning modern paintings, while behind the hotel you will find enchanting gardens. There is a sense of the bohemian to the hotel, but all done with impeccable good taste, not least in the Michelin-starred restaurant.