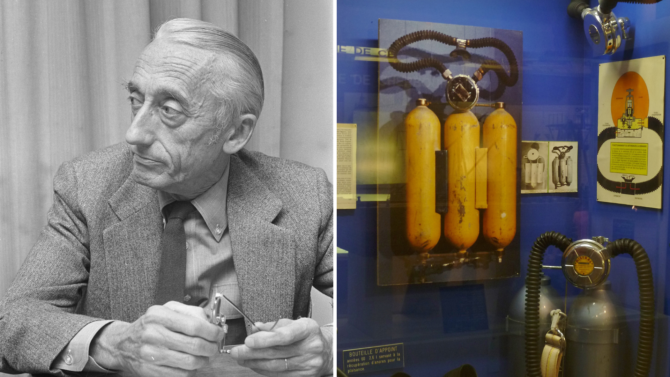 With Becoming Cousteau, the new documentary film from two-time Oscar nominee and two-time Emmy-winning director Liz Garbus, due to be released in UK cinemas on 12 November, take a dive into the world of the pioneering French ocean explorer, Jacques-Yves Cousteau.

HE WAS NEVER DESTINED TO BE A SAILOR
In the 1950s when Captain Jacques-Yves Cousteau – clad in his soon-to-become iconic red beanie –stepped aboard former Royal Navy minesweeper the Calypso to film the effects of overdevelopment and pollution on the planet’s oceans, it was the beginning of a major environmental revolution. Yet the man who was destined to become the world’s most famous undersea explorer and Scuba pioneer was never destined to be a sailor. Born on 11 June 1910, in the Gironde hamlet of Saint-André-de-Cubzac, Jacques-Yves Cousteau didn’t do well at school and he suffered from stomach problems and anaemia. Entering Brest’s École Navale in 1930 he graduated as a gunnery officer – a job which led him to travel widely as a member of the French Navy’s information service – before deciding to train as a pilot, which was a long-held dream.

HE HAD A LIFE-CHANGING ACCIDENT
In the summer of 1935, however, racing along corkscrew roads in the lofty Vosges Mountains in the dark on his way to a friend’s wedding, he had a near- fatal car crash which left him with both arms badly broken. Cousteau’s recovery from the crash took eight long months. In order to restore strength to his mangled arms he swam every day in the sea near Toulon. But it was only when a friend lent him a pair of the new Fernez underwater goggles which allowed him to explore the seabed, that he had the revelation which was to change his entire life.

HE DESIGNED THE FIRST EVER SELF-CONTAINED UNDERWATER BREATHING APPARATUS
By the time war broke out, Cousteau was diving regularly. After watching fishermen in Cam Ranh Bay in Indochina diving for fish, he decided to create an apparatus that would allow divers to breathe underwater. With the help of engineer Emile Gagnan and after much trial and error, in 1943 Cousteau designed the first ever Self-Contained Underwater Breathing Apparatus, or Scuba, as it’s known today. His first wife Simone Melchior Cousteau became the world’s first female Scuba diver. A member of the French Resistance during the war, Jacques-Yves Cousteau was awarded the Légion d’Honneur for his espionage work. After the war he headed back to Toulon where he continued working for the French Navy, before setting sail on the Calypso.

HE BECAME A FILMMAKER
In the 1950s, after designing the world’s first underwater television cameras, he began his film career with Le Monde du Silence, a fascinating marine documentary co-directed with iconic movie maker Louis Malle, which won him the Palme d’Or in 1956 and the Academy Award for Best Documentary in 1957, and allowed him to finance all of his future research activities. Over the years France’s most famous marine explorer, inventor, filmmaker, and conservationist customised the Calypso, turning it into an oceanographic vessel complete with observation windows below the waterline, a helipad and storage space for his beloved submersibles that allowed him to explore the seabed.

HE INVENTED MACHINES FOR UNDERWATER EXPLORATION
Driven by his passion for marine life, Cousteau invented half a dozen machines that were to change the face of underwater exploration. In 1959 he invented the diving saucer, an easy to manoeuvre submarine ideal for exploring the seabed at depths of up to 350 metres. A few years later Jacques Cousteau even pipped the United States Navy to the post, by creating the world’s first underwater habitat, called Conshelf I, where humans could live comfortably for weeks at a time. It was here, in 1965, that he spent a month underwater with five team members filming his second Oscar-winning documentary World Without Sun. Following in the footsteps of his illustrious grandfather, Jacques-Yves Cousteau’s grandson, Fabien, is currently building the world’s largest underwater research station off the coast of Curaçao.

HE WAS AN EARLY ECO WARRIOR
As his career progressed, Cousteau was becoming increasingly interested in defending the environment and in 1960, as director of the Oceanographic Institute of Monaco he led a successful campaign to stop nuclear waste dumping in the Mediterranean. In 1974, the Calypso’s captain founded The Cousteau Society, a US-based, not-for-profit membership group with the aim of ‘saving and protecting marine life for present and future generations’. Then, in 1981, he created Fondation Cousteau (later Equipe Cousteau) in France and in 1990 he launched a successful global petition to save the Antarctica from mineral exploitation.
When Jacques-Yves Cousteau died of a heart attack in his Paris home on the 25 June 1997, just two weeks after his 87th birthday, the world turned out for his funeral, which was held at Notre Dame Cathedral.

Previous Article Travel to Tours: A guide to the Indre-et-Loire capital
Next Article Bargain French properties: Homes in Charente for sale under €100,000