First published: 14 May 2020 by Brigitte Nicolas 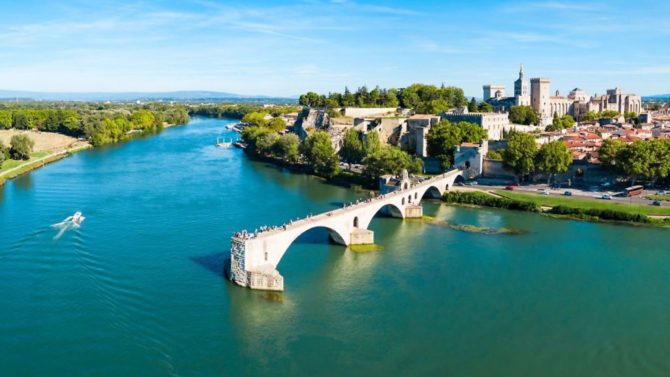 We meander from the Seine in Paris to the Ardèche and the south of France, paying tribute(ary) to the wonderful rivers of France

Paris’s river, the Seine, is 780 km (85 miles) long and flows from its source near Dijon in Côte-d’Or to the sea at the port town of Le Havre, Normandy.

Originating in the Swiss Alps, the Rhône enters France at the base of Lac Léman (Lake Geneva) where it runs along the border of the Ain and Haute-Savoie departments. Later it passes through the city of Lyon and finally enters the Mediterranean Sea on the southern coast between Montpellier and Marseille.

A tributary of the Rhône sourced in the Massif Central, the Ardèche in the department of the same name, is notable for the Le Pont d’Arc, a spectacular arch the river carved into the limestone landscape.

The longest river in France, the Loire has its source in the Massif Central and meanders for 1,020km (634 miles) across France, entering the Atlantic Ocean near Nantes on in the aptly named Loire-Atlantique department along the west coast.

Sourced near the Puy de Sancy volcano, the Dordogne travels 472km (293 miles) west through numerous gorgeous towns and villages and joins the Garonne at Gironde Estuary just north of Bordeaux where both rivers enter the sea.

Know in Spain as the Río Garona, the Garonne crosses the border into Haute-Garonne, France at the Pont de Rei and heads to Toulouse, ‘La Ville Rose’ before turning west to Bordeaux and the Gironde Estuary.

Rising in the forest-filled Vosges department in the east of France, the Saône flows 480km (300 miles) to Lyon where it joins the Rhône.

Crossing the north-west of France, the Marne’s journey begins near Langres in Haute-Marne, travels north to Épernay and the surrounding Champagne vineyards before turning towards Paris to join the Seine.

Winding its way from the Plateau de Millevaches in Limousin through the towns of Limoges, Châtellerault and Chinon, the Vienne eventually becomes a tributary of the Loire.

Starting in the Jura Mountains, the Doubs is partly canalised and travels around Besançon, the capital of the Doubs department in the east of France, ending its 430km (267 mile) course by joining the Saône at Verdun-sur-le-Doubs.

Previous Article How many of these classic Paris experiences have you ticked off?
Next Article What does the end of confinement mean for the French property market?