In the footsteps of Amélie Poulain in Paris 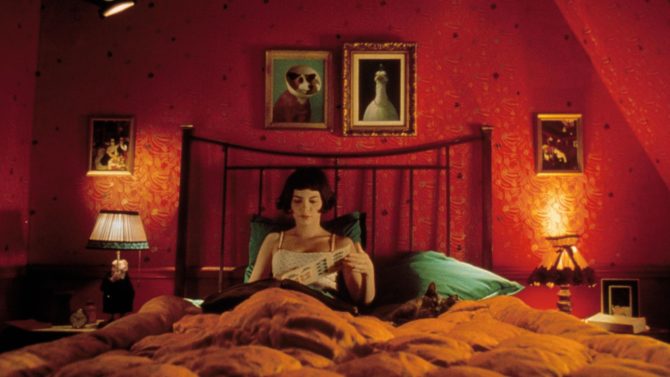 It’s the film that defined Paris for a generation. A gateway to French cinema for the uninitiated, Amélie made an international celebrity out of both lead actress Audrey Tautou and the quaint Montmartre district, dominated by the Sacré-Cœur Basilica. In the twenty years since its wit and whimsy first charmed viewers, few French-language films have made the same waves on the international cinema scene. It’s time to revisit those cobblestone streets and corner cafes, and fall in love with the 18th arrondissement once more.

Where Rue Cauchois butts heads with the storied Rue Lepic sits a café of legendary proportions on the Amélie tourist trail. The maroon awnings and illuminated sign that heralds Le Café des 2 Moulins haven’t changed since Mlle Poulain waited its tables. Alas, the tobacco counter presided over by Georgette (Isabelle Nanty) closed a year after the film’s release, when café owner Claude Labbé retired after more than 15 years at its helm. At the time, a concerned resident told Le Parisien: “As long as it doesn’t become a Chinese restaurant, and it keeps the tobacco counter, that’s the main thing.” Only one of those wishes was granted.

The café takes its name from two of Montmartre’s symbols: the Moulins de la Galette and Radet. In its 19th-century heyday, the district was home to some 300 windmills and their sails have been immortalised in works by Van Gogh, Toulouse-Lautrec, Renoir and more.

Despite rumours of the new owner turning it into an Amélie-themed café, no dramatic changes materialised at Les 2 Moulins. Naturally, it has evolved into a place of pilgrimage for fans across the world, who jostle for seats with seasoned locals – some of whom may rue the cafe’s success. But if you decide to wait out the queues, try the Menu Amélie: finishing with a crème brulée, you too can enjoy the simple pleasure of cracking its crispy top with a teaspoon, just like the character.

Rarely has a humble greengrocery become a film star, so it’s not hard to see why its then-owner effectively turned his shop into a shrine to all things Amélie. Au Marché de la Butte, at 56 Rue des Trois Frères, was given the sign ‘Maison Collignon’ during filming in reference to its fictional owner, the odious M. Collignon.

Real-life owner Ali Mdoughy was so taken by the shop’s newfound fame that he kept the sign in place and even under new ownership, it remains there today as a reminder of the shop’s moment in the spotlight. In 2003, two years after the film’s release, Mr Mdoughy told the New York Times, “Amélie has changed my life.”

As well as selling the usual épicerie fare – like Amélie’s usual three hazelnuts and one artichoke – the shop is a cornucopia of souvenirs and memorabilia dedicated to the film. You can see why Amélie loved to stick her hand in a sack of grain and savour the feeling here – although we’d advise against replicating the scene!

Towards the beginning of the film, Amélie famously breaks the fourth wall in a traditional cinema, when she whispers to the camera: “I like looking back at people’s faces in the dark.” She explains how she loves spotting the little details other people miss, and hates it when actors pretending to drive in American films never seem to watch the road.

The setting for this scene is Studio 28, on the narrow Rue Tholozé. An arthouse venue, it’s exactly the sort of place you can imagine Amélie going. It opened in 1928 with 400 seats and was frequented by the quarter’s artsy set, including Jean Cocteau, who designed the chandeliers.  Over 90 years later, it is still going strong – albeit with 170 seats. Come for recent French films with English subtitles.

The Paris Métro is a fittingly artistic setting for some Amélie scenes, and two Montmartre stations make guest appearances: Lamarck – Caulaincourt and Abbesses, both on Line 12. But did you know that Abbesses gets a body double in the film?

At the bottom of Montmartre hill, Abbesses is Paris’ deepest Métro station, accessed by two sets of spiral stairs and two lifts. You can imagine the logistics nightmare that would have caused for the film crew – not to mention the small matter of the other passengers – so the Porte des Lilas station was used for filming instead.

Located on the border of the 19th and 20th arrondissements near one of the city gates, the Porte des Lilas serves Lines 12 and 3bis – but it has a second job as a film set. The side platform for Line 3bis is not in use and stands in for the Métro on film and TV shoots. As well as Amélie, the 2009 film Julie & Julia with Meryl Streep was filmed here.

Heart of the hill

As befits a film set in Montmartre, the Sacré-Coeur gets its moment in the limelight when Amélie sets a treasure hunt for Nino up and down its 222 steps. Today you’ll still see the carousel, phone box and telescope immortalised in the film, as well as the street hawkers, graffiti, litter and the other aspects of Paris’ darker side that were scrubbed from scenes.

The idealised version of Montmartre depicted in the film may see tourists disappointed that the area is not film-set perfect when they finally visit. But relics like the café and corner shop are welcoming portals into Amélie’s fantastical world that we can all still enjoy, two decades later.