Tour the Bordeaux vineyards in an English taxi 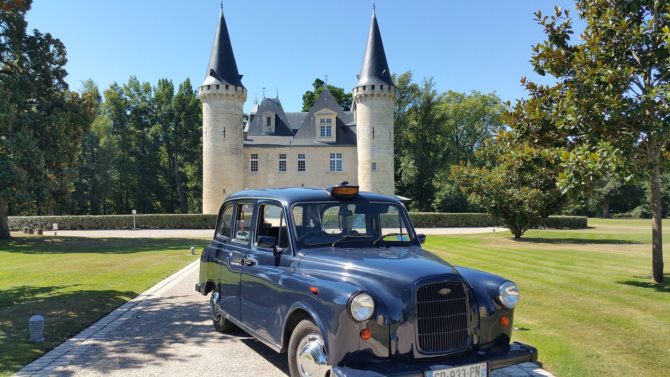 The iconic black cab is as much a symbol of London as Buckingham Palace and Big Ben but you probably wouldn’t be expecting to find one among the vineyards of Bordeaux. And that’s exactly why you will. Antoine Beucher, a keen wine enthusiast, came up with the idea for Wine Cab after he moved to Bordeaux and tried to find a wine tour that offered something a bit different.

Failing to do so, he decided that he would be the one to create a unique new concept, and when he happened to see a London cab in Paris, the idea for Wine Cab was born. He now has three English taxis, all bought in France from individual owners, and hopes to expand the concept into other French wine regions.

Wine Cab taxis have been fitted out as tasting rooms complete with mini bar so that passengers can sample Bordeaux’s best as they enjoy being chauffeured through the vineyards, with the driver doubling as a personal guide to the region and its famous tipples.

There are six classic circuits available, from visiting the region’s famous wine-producing châteaux to meeting the pioneering women making a name for themselves in the world of Bordeaux wine. The tours, which take four hours, are for two to four people and are priced from €132 per person, which also includes a souvenir book with polaroid photos as a reminder of your time in the vineyards. Or, for those keen to take on a challenge, there’s a six-hour marathon tour in the Medoc with up to 18 tastings on offer (from €230 per person). Tailor-made tours can also be organised, or you could even create your own wine at a cellar master workshop.

Previous Article Is it worth renting out your holiday home in France?
Next Article Dreaming of setting up a campsite in France? This is how to do it!