Skiing in France: Why you should ski in Val d’Arly 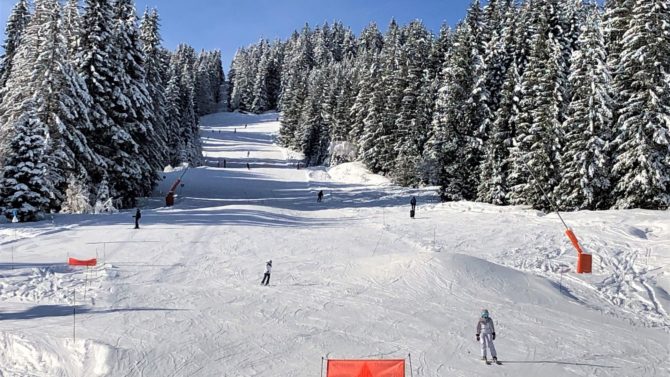 “Look up,” shouted Hervé my ski instructor. I did and there in front of me was Mont Blanc glistening with a fresh sprinkling of snow. This awe-inspiring sight suddenly came into view during my first morning skiing in Val d’Arly, a hidden gem of an Alpine resort where I was hoping to find my ski legs after a decade.
The pure joy of skiing in the shadow of the highest mountain in the Alps overcame all my nerves as I navigated my first red run of the day. Following a night of heavy snow, the summit shimmered in the sun, offset by a sapphire sky. There was no time to waste, I had to get a photograph before the light changed.
Instinctively I schussed through the virgin snow until I arrived at the best vantage point. Surprisingly, I came to a dramatic stop creating a spray (almost like a seasoned pro) before grabbing my camera to capture the moment. It’s amazing how quickly you find your ski legs when there’s so much sightseeing to be done.

What to expect in Val d’Arly
From the imposing presence of Mont Blanc to picture-perfect villages and fairy-tale woodland runs this is the most scenic resort I have ever experienced. The luxury of space makes it a top choice for those of you seeking a family ski holiday or weekend break with safe social distancing.
Nestling between Aravis and Beaufortain, Val d’Arly is made up of four villages: Crest-Voland/Cohennoz, Flumet/Saint Nicolas la Chapelle, Notre-Dame-de-Bellecombe and La Giettaz en Aravis. The first three are part of the extensive Espace Diamant ski area while La Giettaz en Aravis links to Portes du Mont Blanc. Unlike its more glamorous neighbour Megève, this cluster of traditional Savoyard farming villages offer a breath of fresh air and are a popular getaway for French families.
My small group enjoyed the space to ski across wide pistes, jump on a chairlift without queuing and bag the best table in our mountain restaurant for a hearty Savoie lunch. What more could you ask for? How about the magic of Christmas which lingers in these villages way beyond Twelfth Night? After a 75-minute hop from Geneva Airport via Albertville, venue of the 1992 Winter Olympics, we were greeted with the sight of decorated fir trees and twinkling lights – and this was at the end of January! Worth considering if you want to plan a festive family ski break but not pay those seasonally hiked prices.

Skiing with a difference
But how had skiing changed since I last ventured out on the slopes? This new world of magic carpets gently pulling you uphill while undercover would have to wait as I embarked on the new craze of ski bob which even has its own World Cup event hosted in the village. Think of a bike with no wheels or brakes and you will get the idea. First challenge was to carry the bob on the button lift to the top of the gentle nursery slope. Not as easy as it sounds, so with one hand holding the metal frame and the other grasping onto the lift for dear life, up we went… Once at the top you perch on the saddle, place your feet, kitted out in mini skis, on the snow and point your handlebars downwards. After a shaky start I began to pick up speed before zig-zagging across the nursery slope towards the lift before starting it all again just as a blizzard began – the kids will love it.

Heady heights
The calm after the storm revealed almost perfect ski conditions. I was lucky enough to enjoy a private lesson with ESF guide, Hervé, and to experience the Espace Diamant ski area which beckoned from my window and covers 190km of picturesque runs.
I may have swapped my trusty bobble hat for a helmet but once I felt the snug fit of my boots and heard the snap of each clip as they attached to the skis – I was back. The old muscle memory kicked in and we were away on a button lift from Crest-Voland before heading down some easy blue and green runs to get started. Within an hour I was ready to hop on the chairlift and head 2,069m up the mountain to Sommet de l’Espace Diamant and my first glimpse of Mont Blanc.
The transition up to a red run felt natural and the only wobble was when Hervé pointed up towards Le Coeur du Diamant restaurant, located at the top of Notre-Dame-de-Bellecombe ski area at 1,950m. I could see a welcoming sun terrace far in the distance, the designated lunch stop for our group.
With the promise of a plate of hearty tartiflette I glided across the wide pistes despite weary legs and made it up just in time for a glass of Kir. A mountain lunch has to be one of the joys of a ski holiday and this one offered all the right ingredients: fantastic food, panoramic view and cool vibe.
Refuelled and ready to go it was literally all downhill back to the hotel. My only criticism is the scenery is so magnificent there is a distraction at every parallel turn. As magical experiences go, skiing in the shadow of Mont Blanc is up there.
After a day of skiing I soon discovered not much had changed, although modern technology has allowed for a few improvements. Lift passes, which used to hang round your neck, are now magnetic chips you slip into your sleeve pocket (much easier) and a computer now helps to ensure your skies are the perfect match by assessing your vital statistics and experience.
On our final day we headed to La Giettaz en Aravis which links up to the Portes du Mont Blanc ski range to 100 km of runs. Thankful that I had found my feet this ski run proved more of a challenge with a choice of black runs to keep expert skiers engaged. The combination of real snow and ice from canons created some tricky patches where you suddenly hear the crunch beneath your skies. The morning was spent ebbing and flowing between broad pistes and gliding through gentle woodland runs dappled in light. This is what skiing is all about, feeling the wind whistling as you schuss down shimmering slopes with the sun on your face – I can’t believe it’s taken me so long to return.
Don’t forget to take Hervé’s advice and always look up when you’re are skiing in Val d’Arly – you won’t be disappointed.

WHERE TO STAY
Feeling like a kid waking up on Christmas Day (after leaving a grey England) we checked into the rustic, Le Caprice des Neiges, in Crest-Voland where the festive theme continued with garlands over the roaring fireplace and a scatter of sheepskin rugs. And just like a gift that keeps on giving I opened my shutters to discover a ski lift outside the window. Such a relief to know we wouldn’t have to go far in cumbersome boots, carrying heavy skis, to access the slopes.

WHERE TO EAT
Le Toi du Monde in Flumet/Saint Nicolas la Chapelle. This family farm, known as Grandma’s House, dates back to 1886 and offers that rare ability to cater for all ages with its ‘DNA mix’ of music, locally produced food and a guest house or ‘eco gîte’ which can sleep two to 20 in the bedrooms while sharing a kitchen and spa.

La Ferme de Victorine, a Michelin Bib Gourmand-recommended restaurant in Notre Dame de Bellecombe. As we made our way into the restaurant, we got the feeling we were being watched. A row of cows peering in the window as you dine is a very unnerving experience and nudged me to select a vegetarian starter. One of my dining companions quipped that it was like looking at a tank of lobsters, but we were informed the cows are used to provide cheese and milk.

Previous Article 5 reasons to live in Hérault
Next Article Chateaux, Chanel and Chefs: The January 2022 issue of French Property News (plus Living France) is out now!