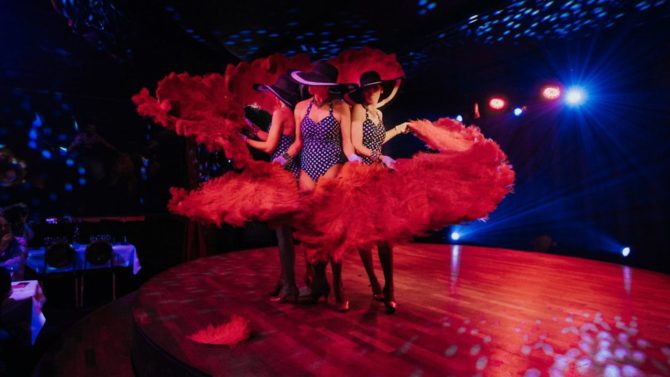 This February and March, 40 incredible concerts, cabarets, theatre, comedy and circus shows will be performed across some of the most prestigious venues in Paris. Find out what’s on.

Whether you want a romantic evening for two, a family outing, a good laugh, or a dinner with a difference, Showtime in Paris from 25 February to 10 March will have something for you. We take a look at some of the shows:

If you like your dinners with a side of aria, then a night at Bel Canto is for you. A quartet of singers will regale you with songs from the operas Carmen, Don Giovanni, Tosca, The Magic Flute and La Bohème as you enjoy an à la carte three-course menu.

The Swingin’ Lovers’ eclectic mix of original jazz songs cover themes like desire, love and having a good time with. With Paddy on trombone and vocals, and others on drums, guitar and saxophone; the band, a group of guys from America, France, Australia and Ireland are sure to take Paris by storm.

Come to the cabaret old chum, for an evening of humour and glamour! The master of ceremonies will lead you through this magical show with dancers, comedians, aerial acrobats, musicians and magicians.

Roll up, Roll up. The Bormann family are ready to delight you with their new circus show Juracirque. Forget lion taming, this show will see larger-than-life dinosaurs take to the floor, as well as jugglers, tightrope walkers and clowns.

An off-the-wall burlesque show in which you’ll hear suburb renditions of some of the all time best French chansons. After which, there will be an opportunity to hit the dance floor until late into the night. You’ll also have a chance to test your knowledge with a name-that-tune quiz.

The Féerie show sees the Moulin Rouge and its 60 artists presenting two hours of cabaret and music hall styles acts including a Cancan dance. Performers will be dressed in extravagant costumes shimmering with feathers, rhinestones and sequins and you can expect a warm and joyful unique experience.

Jazz fans will love this double bill of English bands in one of the most legendary clubs in the capital. It is the second year in Paris for formidable funk jazz band Resolution 88, while The Expansions are making their very first appearance on the French scene.

With tap dancing, circus acts, French songs and 35 dancers, this show is a fabulous blend of sensuality and fun. Expect musical comedy and lavish fanfare as well as a menu of high quality French food.

Scandals at the Court Of The Sun King

Take a seat at ReminiSens and, over dinner, you’ll enjoy a journey through time, discovering the customs and culture of the Sun King’s court. In this theatrical show, Mathilde, a young girl who has just left her convent, arrives at Versailles to meet her brother Gregoire. She soon hears all the amusing and troubling stories of the court that she is now a part of. The show will be a lively experience in a typically baroque setting.

Want to take in some French theatre but worried you’ll be completely lost? Well, at the Théâtre Le Ranelagh you can see a performance of Cyrano de Bergerac in French, but with English subtitles projected above the stage so you won’t miss a thing. This is the story of one man’s quest to woo his true love – or the tragic tale of a master poet and sword-wielder who is brave in everything but love.

Visit www.showtimeinparis.com for more information about these shows as well as a full programme of events.