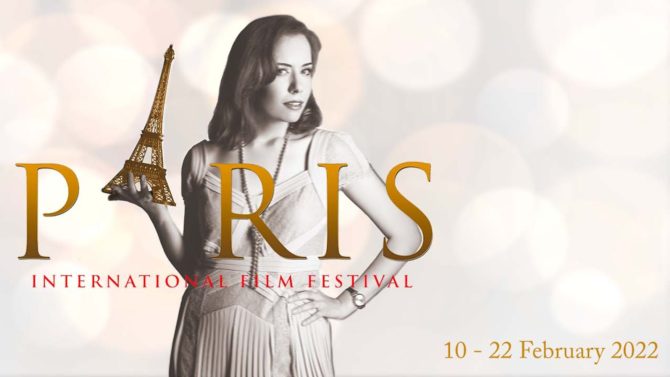 This fourth edition of the Paris International Film Festival (PIFF) will open its doors virtually once more to audiences in February 2022. Named as one of 2021’s top film festivals on the Filmocracy platform, which will again be the digital platform for 2022’s festival, PIFF will showcase French films, international features and short films from an array of independent filmmakers.

Taking place online from 10 February – 20 February 2022, the festival will again take place across Valentine’s Day which is very apt given that Paris is the renowned city of love. As such, part of the festival’s online features includes virtual tours around some of Paris’ tourist attractions such as the virtual Eiffel Tower. Plus, there is also the virtual opportunity to sit in a virtual Parisian café to have a dialogue with filmmakers and other festival guests that may be present that day. Despite being virtual, there are still those personal opportunities for networking within these virtual locations which also provide that occasion to be immersed in Paris with a virtual map too.

The festival is now celebrating its fourth year after its successful third edition which saw films such as Big Kitty being awarded the prize of Best Experimental Film and subsequently being screened at the Cannes Film Festival in 2021. Other festival successes from 2021 were noted as Cream, which was the winner of the Special Jury Award, was acquired by HBO. PIFF is also one of the film festivals that is officially accredited for the Cannes Film Festival.

The establishment of the festival is due to the creativity and innovation of actress and filmmaker Jenna Suru who is the Director of Programming for PIFF. Suru has directed films such as The Golden Age which opened the 2020 London Independent Film Festival and The Sparkling Homes documentary about homeless children based in New Delhi. Suru’s resumé is impressive and is a passionate advocate for diversity within the film industry and championing the commissioning of more films by female filmmakers. This translates into the themes of change and hope that underpin PIFF.

This film programme for this 2022 edition of PIFF has 22 features, 30 shorts and a music video contained within this year’s festival programme. The film categories to explore within the programme are Bring Change, Documentaries For Change, No Return Ticket and World Changing Experiments which cover feature films such as A Bird Flew In starring Sadie Frost and Pierre & Jeanne starring Mathieu Amalric as well as short films such as The Human Voice. Passes are still available for purchase to explore the festival fully on PIFF’s website.

A selection of the films can also be seen in the official trailer for the festival below.

Find out more about writer (and self-confessed Francophile) Latoya on her travel and lifestyle blog, Franglais27 Tales.

Previous Article Book Competition: Win a copy of Fracture by David Longridge
Next Article 75 years of Dior: a fashion statement inspired by Normandy