75 years of Dior: a fashion statement inspired by Normandy 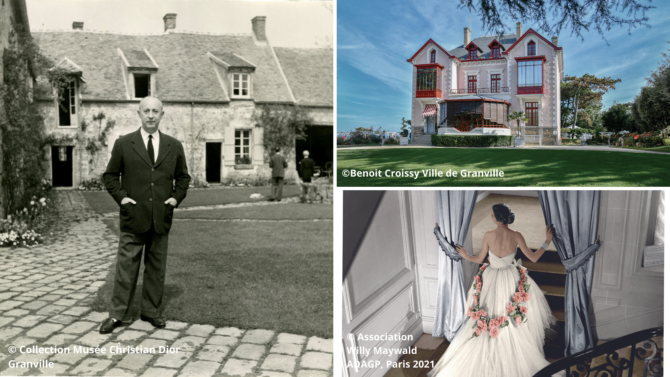 It was the first major fashion event in Paris since the outbreak of World War II and the city was buzzing with excitement over it. On 12 February 1947, Christian Dior presented his spring/summer collection, marking a defining moment in 20th-century fashion. Among the 90 different styles modelled that day, the most iconic was the Bar suit (a nod to the stylish watering hole of the nearby Plaza Athénée) which featured a pleated black skirt and a tailored ivory jacket. It was part of what Dior called his Corolle line, but the collection soon took on another name when the editor of Harper’s Bazaar, Carmel Snow, later exclaimed, “It’s quite a revolution dear Christian, your dresses have such a new look!”
And a new look it was. With his cinched waists, soft shoulders and voluminous skirts, Dior had created the polar opposite of the androgynous style that was ubiquitous in the 1940s. One can only imagine that the other women gathered there that day would have suddenly felt a little drab in their simple, straight skirts that, thanks to fabric rationing, fell just below the knee. After years of adversity and sacrifice, women were now free to be frivolous again. The New Look was an instant success and it was about to take the world by storm.

Inspired by Normandy
When asked about his New Look, Dior likened his creations to flowers. He used the botanical reference with his Corolle line because he designed the full skirts to look like petals. Not only were his silhouettes reminiscent of flowers, but many of his designs were also embellished with floral embroidery and rose motifs.
Dior’s floral inspiration can be traced back to his childhood home in Granville. Set on a rugged outcrop of the Normandy coast, the Villa Les Rhumbs is a grand peach-coloured house with a sprawling lawn that overlooks the sea. Here Dior learned the art of gardening from his beloved mother, Madeleine, and developed a life-long love of roses. Together they would lovingly transform the villa’s windswept grounds into an English-style garden. As a child, Dior developed a passion for lily of the valley which grew in abundance in the garden at Granville and it would later become the signature emblem of the Dior brand. It is still customary for employees to receive a sprig of lily of the valley on 1 May. The family eventually moved to Paris, but kept Les Rhumbs as a holiday home and returned each year for the summer season.

Although Dior came of age in the Roaring Twenties and eventually moved in artistic circles with great Surrealists such as Jean Cocteau, Erik Satie and Salvador Dali, it was ultimately his home in Granville that would have the greatest impact on his work. In his 1956 autobiography, Dior by Dior, he recalled, “I have the most tender and amazed memories… of my childhood home. I would even say that my life and my style owe almost everything to its site and architecture.”

A lasting tribute
Sadly the family home was sold in 1932 after his father’s fertiliser business collapsed, but was eventually purchased by the town of Granville, with Dior’s treasured gardens opened to the public. In 1997, the house became the Musée Christian Dior, the only museum in France to be dedicated to a couturier, with his sister Catherine made honorary president in 1999 – a role she fulfilled until her death in 2008. A celebrated Resistance fighter who survived a German concentration camp, Catherine shared her brother’s love of flowers and had spent many years running a rose farm in Provence.
Dior was immensely proud of his sister and named his first perfume, Miss Dior, in tribute to her. And although he could never live up to Catherine’s heroic wartime contributions, he had also done his part for France. Much like the women he dressed, Dior had pulled Paris out of the post-war doldrums and presented her to the world like the beautiful flower he knew she could be.

Previous Article Moteur, action! Paris International Film Festival to showcase the best of French cinema
Next Article French property caretaker: Could you do my job?