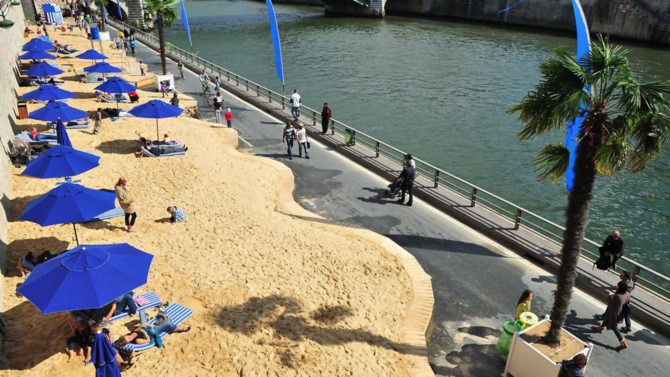 From flower festivals to outdoor theatre festivities and open-air music concerts, there are so many ways to make sure you have fun in the sun in France this July

During the summer months, many Parisians flee the city heat in favour of the countryside, but those that stay flock to the banks of the Seine which are transformed into ‘urban beaches’ for the Paris Plages event. The beaches take over the newly opened Rives de Seine and the Bassin de la Villette with palm trees, deck chairs, watersports and plenty of sporting activities linked to Paris’s bid to host the 2024 Olympics. Kicking off on 6 July to 1 September, the city’s urban beaches offer all sorts of shoreside activity from rowing and pedalboating to ballroom dancing and zumba every day from 9am to midnight. Or, if you’d prefer, just lounge on one of the many deckchairs with a good book and something chilled from the beach bar and enjoy Paris when it sizzles.

On the 14 July, a ‘Vive la France’ spirit sweeps France for the annual Fête de Nationale de 14 Juillet celebrations. Better known to the British as Bastille Day, the jubilations marks the storming of Paris’s Bastille prison in 1789 with spectacular firework displays and an impressive military parade along the Avenue des Champs-Elysées. Whether you stay up late for a fireworks extravaganza or celebrate with a traditional French breakfast, there’s no better day to indulge our inner Francophile.

Watch some of your favourite films under a starry Paris sky this summer at the Cinéma Plein Air in Parc de la Villette from 17 July to 18 August. For its 27th edition, the open-air film festival has a theme of ‘à la table’ and is showing films with a food link, from Disney’s Ratatouille to Billy Walter’s Sabrina starring Audrey Hepburn. All movies are shown in their original language with French subtitles. Deckchairs are available to rent from 7.30pm for €7 or you could just sprawl out on a picnic blanket.

As the cultural capital of Brittany, Quimper has been hosting one of the region’s most important celebrations in the calendar for over 90 years – the Festival de Cornouaille. From 23-28 July the town will celebrate its Celtic heritage with lots of traditional music and dancing that will be sure to entertain the 250,000 visitors. From well-known names performing sell-out concerts in the Parc des Expositions to bagpipers playing on street corners and traditional dancers in the medieval streets, the six-day event is sure to be a party to remember.

17 things to do in Paris for families

Each year in July, theatre-goers in their thousands make their way to the Provence department of Vaucluse for the Festival d’Avignon, which has been taking place in the town since 1947. One of the biggest international contemporary live performance events, the festival features a programme of music, dance, art and theatre performed in venues across the city, including the historical Palais des Papes. The festival is taking place from 4-24 July 2017.

You don’t have to step foot in a museum to see some truly great art in Nantes, as the urban art trail, Voyages à Nantes shows. From 6 July to 1 September the marked 12km route allows visitors to take in the city’s contemporary creations (including its mechanical elephant mascot) at their own leisure. You’ll find something new everywhere – from the city’s historic side streets to the old squares and parks. There are 35 stages in total and most of the sites are free to enter.

If there’s one thing worth waking up early for it’s seeing hundreds of hot-air balloons filling an early morning sky, as it does every day at the Mondial Air Ballons in Meurthe-et-Moselle. From 26 July to 4 August, visitors can watch the balloons take off each morning at 6.15am and in the evenings at 6.30pm. There are also air workshops where you can learn about astronomy and meteorology, among other things and after dark, you can enjoy group star observations, and a mesmerising night-time balloon show.

Quiz: How much do you really know about the Tour de France?

When Nice Jazz Festival began in 1948, Louis Armstrong was the headline act, the first of many international stars to perform in the Riviera capital’s big music event. This year’s festival is being held from 16-20 July, with singer Mary J Blige and bandleader Herbie Hancock among the line-up. Concerts are held in the Théâtre de Verdure and on the Masséna stage, which can hold up to 9,000 fans between them.

Celebrate the grape-base liqueur cognac in style during this foodie festival which higlights cognac, of course, but also other local products such as the Pineau des Charentes and Marenne oysters. Visitors settle in fishermen’s shacks on the port to enjoy food and drink while live music is played every night from 25-27 July.

Every July since 1990, the small commune of Moirans-en-Montagne in the Jura department has been taken over by fairy-tale gardens, parades and street theatre for the international children’s festival known as Idéklic. From 10-13 July, youngsters will be able to let their creative streak run wild at more than 50 workshops focusing on everything from making violins to learning about the different sounds made by stones when they hit the floor

British expats John and Bernadette Grimmett founded their Opéra de Baugé festival in 2002 and the annual event held in the grounds of their fairy-tale château in the Loire now draws crowds of over 3,000. Enjoy the refined nature of the opera and arrive early for a glass of champagne and enjoy a picnic on the lawn. This year the event runs from 26 July to 7 August.

The town of Tarbes has a long equestrian tradition and every summer it hosts an equestrian show at the National Stud Farm. Featuring over 300 horses, the 25th edition of Equestria takes place from 23-28 July, showcasing a daring and visually striking show of equestrian art with the ‘Night of Creations’ gala a highlight of the five-day event.

Every year in July, nine communes in the Pays de Caux in Normandy team up for the Festival du Lin et de l’Aiguille. From 5-7 July, the town will expect thousands of visitors making their way to the area to see over 20 exhibitions of contemporary and traditional textile art. Linen fabric fairs, fashion shows and tours of the Terre de Lin factory are among the many highlights of the three-day festivities. Alternatively, you could just take a trip to see the flower in its original form, with violet blues blossoming all around sprawling fields spotted all over the area.