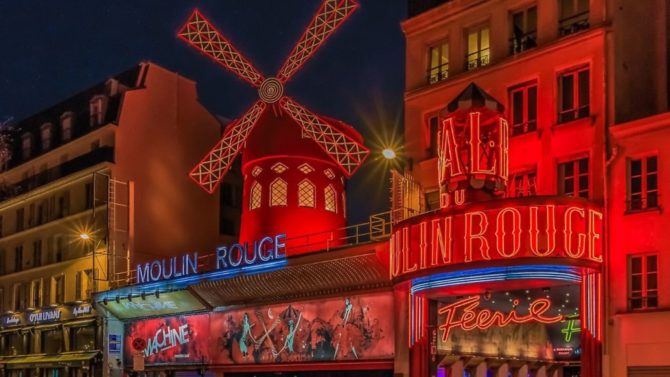 You might be inclined to cry ‘can’t can’t!’ faced with France’s iconic high kicking dance whose name actually derives from the verb cancanner, meaning to gossip or tell tittle tattle and is thought to be related to the scandalous nature of the dance.

Little is known of the origins of the world’s most boisterous leg show: some theories say that it evolved from the antics of Charles Mazurier, a popular showman in the early 19th century who was renowned for his acrobatic antics, while other experts suggest that the physically-demanding dance was an offshoot from the improvisations of working class dancers performing the quadrille, a social dance popular in 1820s France.

Initially associated with the Parisian underworld and back street bordellos, the cancan was first danced by the city’s working class men, but women soon followed suit. The high kicking and splits were considered scandalous enough, but even more risqué was the fact that women at the time often wore open crotch leggings beneath their long skirts.

Drawn by the colour and movement, but also by the dance’s seedy underworld reputation, some of the globe’s most famous artists, including Henri de Toulouse-Lautrec and Pablo Picasso, flocked to the music halls to watch the cancan dancers and immortalise them on canvas.

The dance, which shocked moral and social conventions of the Belle Époque bourgeoisie, rapidly became a symbol of women’s independence in an era when the fairer sex were expected to cover up.

FROM RAUNCHY TO RESPECTABLE

The raunchy dance only started to become reputable in the 1850s when French dancer and writer Céleste Mogador took the cancan under her wing. Mogador, a prostitute turned dancer and writer, who married a count, launched the dance at Le Bal Mabille a stylish open-air dance establishment

with gas lamps, grottos and artificial palm trees where the polka was also introduced to fashionable society.

Although still bearing the whiff of scandal, the new cancan was slightly more decorous, with the long line of high kicking female dancers wearing less revealing underwear as they faced the audience and danced in a chorus line.

It wasn’t until 1889, however, when Le Moulin rouge – with its hallmark red windmill on the roof and giant elephant in the garden – opened at the foot of Montmartre hill that the dance really became popular.

Co-founded in 1889 by businessmen Charles Zidler and Joseph Oller, the Moulin Rouge showcased many celebrated acts, including Joseph Pujol Le Pétomane (the farter) who was famed for blowing out a candle or playing La Marseillaise on an ocarina through a rubber tube.

Artist Toulouse-Lautrec, who spent most of his time in nightclubs in order to hide his congenital growth deformity, was contracted to paint the first – now very famous – Moulin Rouge poster.

His main cancan model was Louise Webber, nicknamed La Goulue or ‘the glutton’ because she would down the drinks of spectators as she danced between their tables.

The poster was considered scandalous, not only because of La Goulue, who was renowned for showing her drawers embroidered with a large heart, to the audience, but also because of the shadowy male figure in the foreground with a straying hand.

With Le Moulin Rouge popularising the dance, other cabarets began to book the cancan dancers and some of them became extremely wealthy, but La Goulue, who was said to be able remove the hat on someone’s head with one high kick, was the highest paid cancan dancer of her time.

With the aid of English impresario Charles Morton the dance, now known as the French Cancan, crossed the Channel and then the pond to become popular in music halls in Britain and the USA where audiences were thrilled to enjoy the latest craze from ‘Gay Paree’.

Once so scandalous that the police would raid dance halls where it was shown, nowadays the cancan is seen as the most colourful icon of the world’s most romantic city. As Toulouse-Lautrec once famously exclaimed: “La vie est belle, voilà le quadrille!” (‘Life is beautiful, here comes the cancan!’).

· In the 1800s there was an all-male cancan act called Le Quadrille des Clodoches.

· Another name for the cancan is chahut, meaning ‘uproar’.

· La Goulue left the Moulin Rouge in 1895 to start her own troupe, but her business failed and she died penniless. The inscription on her tomb in Montmartre describes her as ‘the creator of the French cancan’.

· When His Royal Highness the Prince of Wales, the future Edward VII, came to Paris to see a cancan show in the 1890s La Goulue cried out “Hey Wales, the champagne’s on you!”

If you liked this article, check out our other French icons…

Previous Article Life in Alsace captured by American photographer
Next Article How will France celebrate Bastille Day in 2020?