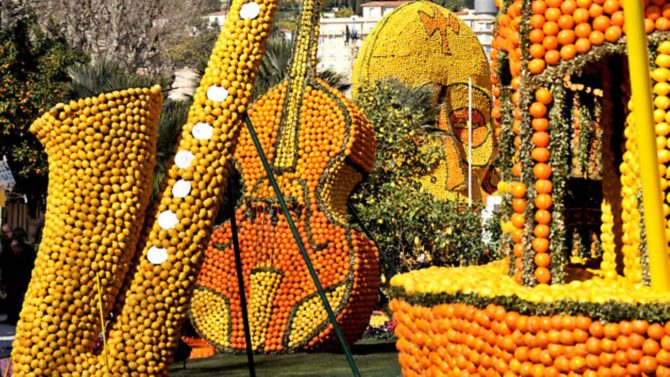 Even in the middle of winter there are a number of festivals and events happening across France, particularly along the Côte d’Azur where the Nice carnival and Menton lemon festival will banish any winter blues. We take a look at what’s on in France in February

The annual Fête du Citron in the Riviera town of Menton began in the 1930s as a celebration of Menton’s success as a citrus fruit producer in the balmy climate of the Côte d’Azur. It has since grown into a world-famous event with more than 250,000 visitors. There is a different theme each year and sculptures made from oranges and lemons are created around the theme – previous creations include the Moulin Rouge and the Taj Mahal. The sculptures are on display in the Jardin Biovès in Menton and look spectacular during the evening light shows. There are also floral parades also the Pormenade du Soleil with floats, dancers and brass bands.

One of the largest carnivals in the world is held every year in Nice; an event which can be traced back centuries to 1294. For more than two weeks in February, Nice is a blaze of colour, music and dancing as the celebrations banish winter blues and get people looking forward to spring at the Carnaval de Nice. There is a different theme each year and the floats in the carnival processions are decorated to reflect the theme. The floats are paraded through Place Masséna and thousands of flowers are thrown into the crowd by performers in costume. There are musicians, dancers and street theatre as well

With its cute cobbled streets, historic canals and charming bridges, Strasbourg is one of France’s most romantic locations, and this month it celebrates love being very much in the city’s air with Strasbourg Mon Amour. More than 40 events are planned, with highlights including a retro slow dance, gastronomic dinners; tours in the footsteps of famous figures such as Victor Hugo and Honoré de Balzac, both of whom were enchanted by Strasbourg; and screenings of romantic films.

Every year the town of Mandelieu-La-Napoule near Cannes on the French Riviera celebrates the locally grown flower, the mimosa, with a festival. The Fête du Mimosa includes a parade of marching bands and floats, flower battles and a Miss Mimosa pageant. There are also guided walks to discover the mimosa which brightens up the areas with its yellow flowers in winter.

The Granville carnival is the largest carnival in Normandy with around 2,400 participants, 40 floats and 120,000 visitors. The carnival is thought to have started more than 100 years ago by fisherman having a final blowout before setting off on the annual crossing of the North Atlantic Ocean. There is a carnival procession, a children’s procession, and a confetti battle with festivities lasting well into the night.

The Dunkirk carnival is another festival that started with fisherman enjoying a final fling before setting off for months at sea, although this one can trace its roots back to the 17th century. Events take place from January until March with fancy dress balls, parades and even kipper throwing.

Bringing classical music to a wider audience is the aim of La Folle Journée, a music festival held every year in La Cité Event Centre in Nantes. With individual concerts lasting no longer than 45 minutes, audiences are freed from the constraints of traditional concert-going and are encouraged to move between the recitals and engage the performers and conductors in conversation between performances.

Considered France’s largest film festival, after Cannes, the Festival International du Court Métrage is held in Clermont-Ferrand every February. The week-long festival is full of short film showings, exhibitions and competitions with categories for international, French and digital short films.

Every year, on 2 February, the French celebrate La Chandeleur; a Christian festival which commemorates Jesus’s presentation at the temple 40 days after his birth. In the Catholic religion, La Chandeleur is celebrated with a blessing of candles and a candlelit procession to church. In popular culture, like Mardi Gras, it is an opportunity to get out the frying pan and make pancakes. When cooking the first pancake, tradition dictates that you must blow on it several times to ward off back luck during the coming year.

Unbelievable pictures from the Fete du Citron in Menton