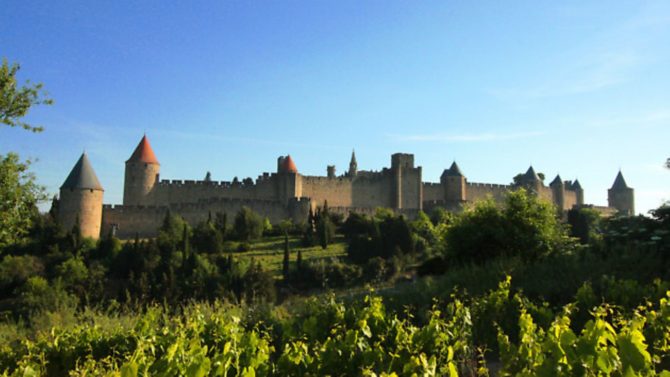 An insider’s guide to Aude in Occitanie, including the main attractions to visit on holiday, the best towns and villages to live in, the major festivals and events, and buying property in Aude

Home to two UNESCO World Heritage Sites, swathes of vineyards, Mediterranean coastline, a rich history and good food, Aude in Occitanie, is something of a hidden gem.

Surrounded by the departments of Tarn, Hérault, Pyrénées-Orientales and Ariège, and nestled in the region of Occitanie (formerly Languedoc-Roussillon-Midi-Pyrénées), Aude’s numerous varied landscapes, stunning scenery and pleasant weather all year round means the department has become an ever popular destination for property buyers and holidaymakers.

Away from the Carcassonne and the Canal du Midi the department is largely unknown, yet it has much to offer whether you prefer a busy town, peaceful countryside or a stay near the coast, and most importantly, there is an abundance of good wine.

Plane: Carcassonne airport has regular flights from London Stansted, while Toulouse in the neighbouring department of Haute-Garonne is the closest large international airport.

By train: Eurostar to Paris and jump aboard the TGV to Carcassonne

Places to visit in Aude

Aude’s capital is the town of Carcassonne. This is a town of two halves – there is a fairytale walled Cité, instantly recognisable and one of France’s most visited attractions, and there is the ville basse across the river which is where the majority of the town’s inhabitants live. The iconic walled Cité de Carcassonne is said to be the inspiration behind Walt Disney’s Sleeping Beauty castle and it certainly looks like something out of a fairytale. Carcassonne is famous for its Roman and medieval fortifications, and a walk around the lices, the open space between the outer wall of the Cité and the inner fortifications, is not to be missed.

History buffs can also immerse themselves in the numerous Cathar castles in Aude, including the lively Roman town of Narbonne.

Pay a visit to the pretty town of Limoux, which sits on the Aude River. There are plenty of museums where you can immerse yourself in Aude’s rich cultural heritage including the Musée de la Chapellerie (Hat Museum), Musée du Miel (Honey Musuem) and Musée des Dinosaures (Dinosaur Museum). The town also hosts the world’s longest festival: Le Carnaval de Limoux. Taking place every weekend from mid-January to the end of March, and celebrated since 1604, masked and costumed ‘guilds’ take to the streets playing music, singing songs and pranking visitors all in the ancient Occitan language.

Ideal for hikers and nature enthusiasts, the Narbonne regional natural park is a beautiful, unspoilt area of flora and fauna bordering the Mediterranean. Boasting lush greenery, natural areas, vineyards and charming towns and villages, the diverse natural site has around 200km of trails divided into 30 loops for walkers of all experience.

Things to do in Aude

Aude is home to plenty of vineyards to explore and where you can stop for a tasting or two. Don’t miss the Limoux sparkling wine – legend has it that Dom Pérignon smuggled the secret back to Champagne to produce France’s famous bubbles. It is also said that the French dish cassoulet was invented in the town of Castelnaudary so make sure you try that too!

Explore Aude’s concealed underground on a guided tour through the Limousis cave. The largest accessible cave in the department, it has eight rooms of stalagmites, crystals of aragonite and the Giant Hole of Cabrespine. The stunning setting, all remarkably lit-up alongside detailed discussion of the cave’s history and evolution, makes for a once in a lifetime trip.

For sun worshippers and water sports enthusiasts Aude boasts 50km of wonderful sandy beaches including plenty of popular seaside resorts and quiet stretches of sand for a peaceful stroll along the seafront. The 8km coastline of Les Cabanes de Fleury is ideal for a quiet afternoon in the sun while Narbonne Plage is perfect for those who fancy quad biking or jet skiing.

There isn’t a typical style of architecture in Aude – with traditional southern France mas and farmhouses built using local materials being some of the most popular property styles.

You can find properties in Aude for sale on the France Property Shop website.

Where to buy French property if you want vineyards