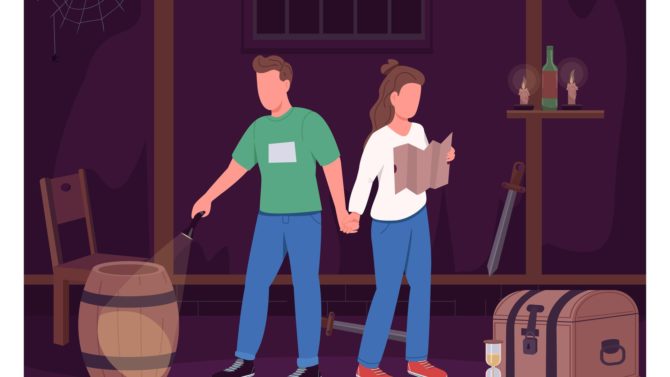 From unlocking apéro drinks and nibbles to navigating the Paris Catacombs, these exciting escape games can be played with family and friends in locations across France.

Escape Games l’Apéro
At home
Everything you need for the ultimate apéro experience (drinks, nibbles, corkscrew, chopping board…) is locked inside a large cool box and to gain access, you’ll need to join the Front de Libération de l’Apéro’ in the fight against the ‘killjoys’. The more you advance in the game, the more items you release.

The Game Escape If You Can
Paris
A 1,500m2 space in the heart of the city offers multiple life-size escape game missions for teams of three to five players, be it restarting a broken-down Métro train to avoid a crash at the station, playing a starring role in your own horror film at an old Parisian movie theatre or navigating the famous Paris Catacombs.

A post shared by THE GAME – Escape If You Can (@thegame_paris)

GET OUT!
Across France
A strange family. A secular mansion. An intriguing hallway. A chance to channel your inner detective, this immersive experience gives you 60 minutes to conduct an investigation, find the clues and solve the riddle that will allow you to escape, helped by a member of the mysterious Gretenfield family.

MYSTERY O’CLOCK
Brest
Lose yourself in the world of Alice in Wonderland where you’ll meet Lewis Carroll’s familiar characters as you follow the clues Alice has left behind to help you escape the Queen of Heart’s clutches, or take to the streets of Brest for an outdoor game to save the city from an alien invasion.

L’Odyssée Echappe Toi Si Tu Peux
Vendée
Rather than escape from a room, you have one hour to complete as many of the 16 rooms as possible, each of which will put your mental and physical agility to the test. There are some surprises in store too in this experience for two to 36 players.

Aventure
Nice
Players will find themselves inside a military airship during the time of Steampunk in an hour-long escape game experience for teams of two to six, or be transported into the world of gangsters where you’ll need to get your hands on Al Capone’s loot.

WAY OUT
Lyon
Captain Nemo wants to keep you locked up forever in his submarine in the 20,000 Leagues Under The Sea experience, while your mission in Treasure Island is to face pirates and join the race to be the first to find the treasure.

A post shared by Way Out! Escape game Lyon (@wayout_escapegame)