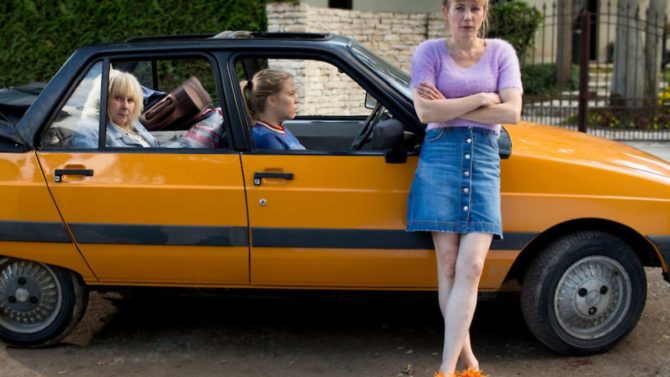 An Internet film festival is bringing the best of up-and-coming French cinema to online platforms, accessible worldwide. Here’s a selection of French movies you can watch now.

From 19 January to 19 February, My French Film Festival allows viewers around the world to watch a selection of 30 new and unreleased films. Viewers can vote for their favourite films among the 10 short films and 10 long-feature films in competition but there are plenty of out-of-competition movies to watch too. Short films are free to watch and long feature films are €1.99 but you can also purchase a €7.99 pack to watch all the films.

You can watch them on the festival’s official website by creating an account but also on partner platforms such as Youtube or iTunes. Local theatres and even some airlines will also be showing screenings so head to the website to find out more.

There are six different categories to discover and here is a little taster of what you can watch:

WHAT THE F…RENCH!? – Absurd and at times crazy situations featuring endearing heroes

Marc Châtaigne, an intern at the Department of Norms and Standards, is sent to French Guiana to supervise the implementation of European standards at the GUYANEIGE construction site: the first indoor ski slope in the Amazon aimed at boosting tourism in French Guiana. He gets assigned a teammate who is distractively beautiful but far from being a pushover. This whacky comedy is director Antonin Perejatko’s second feature and a stars Vincent Macaigne, Mathieu Amalric and Pascal Légitimus.

Oscar Mongoût, a gourmet cannibal, is consumed with love for a neighbour in his building, the very vegetable Miss Carrot. But this passion seems destined to fail: she is vegetarian, while he has a severe case of vegetable phobia. Things take a drastic turn the evening she invites him to dinner…

Watch the trailer below or the full film (15 minutes) here:

13-year-old Ava is on a seaside vacation when she learns that she will lose her sight earlier than predicted. Her mother decides to behave as though nothing has changed so that they can spend the best summer of their lives. Ava deals with the problem in her own way. She steals a large black dog belonging to a young man on the run… This coming-of-age film which explores blossoming sexuality and love is Léa Mysius’ debut feature.

Aglaé is a young factory worker whose life evolves around her job at a car crash test site. When she learns that the factory is going to be relocated abroad, she surprises everyone by accepting to go to India in order to keep her job. Accompanied by two colleagues, she sets out on a perilous journey by car to the other side of the world. Starring India Hair, Julie Depardieur and Yolande Moreau this touching movie is full of poetry, satire and surprise

TEEN STORIES – The age of adolescence, when anything goes!

L’Enfance d’un chef/Birth of a leader

Vincent is 20 years old and a successful actor, renowned by critics and audiences alike. So much so that he has been offered to star in this year’s most high-profile film: a biopic about Charles de Gaulle as a young man. The only problem is that Vincent’s parents are moving to Orléans, thus forcing him to live on his own for the first time. And so a new life begins for Vincent, as daunting as it is lonely. This film follows his first footsteps on the path to independence.

This documentary takes us into the minds of eleven children and teenagers with astonishing personalities who are growing up in some of France’s most underprivileged housing projects. The film shows us the world through their singular and unexpected gaze, their funny and incisive thoughts.

Fresh out of jail, Nas returns to his neighborhood of Pigalle, where he gets back together with his friends and his older brother Arezki, who runs a bar, Le Prestige. Nas is determined to make a name for himself, and Le Prestige might just be the stepping stone he’s looking for.

Cleanliness. Routine. Isolation. These are a few of our agoraphobic protagonist’s favourite things. When an unwelcome furry visitor violates the rules of his ritualistic world, things take an unexpected turn…

How many of these famous French women have your heard of?

A French icon: the beret

Victoria Spick, a criminal defense attorney on the verge of an emotional breakdown goes to a wedding where she runs into her old friend Vincent and Sam, a one-time dealer she had successfully represented. The next day, Vincent is accused by his girlfriend of attempted murder. The only witness is the victim’s dog. Victoria reluctantly agrees to defend him, and at the same time hires Sam as her nanny. Her life is about to take a devastating turn. Featuring Virginie Effira, Vincent Lacoste and Melvil Poupaud all star in this romantic comedy.

All Marion Steiner can think about is rehearsals for a new play she is staging at the Montmartre Theatre, where she has taken over as director in place of her Jewish husband, who has disappeared. Everyone believes that Lucas Steiner has fled France, but he is, in fact, hiding in the basement of the theatre. Young Catherine Deneuve and Gérard Depardieu star in this 1980 film celebrated as one of director François Truffaud’s finest.

Straddling the line between graphic novel and animation, Phallaina tells the story of Audrey, a young girl who suffers from hallucinatory fits. When Audrey undergoes medical tests, a neurologist discovers that she has an anomalous cerebral structure that enables her to hold her breath for long periods of time. This immersive story of personal transformation in which mythology meets cognitive sciences is the first scrolling comic strip designed for touch screens.

In a world in ruins, only fungi and mold grow among gigantic carcasses of dried-out insects. A meteorological change takes place as rain irrigates the barren planet, progressively flooding it. A new ecosystem grows in the water, in which giant carnivorous tadpoles thrive. Plunged into an arid, then aquatic, space, Planet ? offers viewers the chance to enjoy an amazing multi-spatial and timeless experience.

Previous Article How we transformed a ruin into a stylish French château
Next Article WIN! A copy of The Place to Be