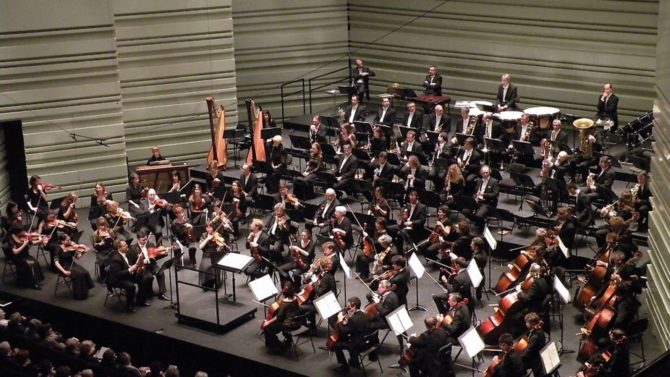 Making classical music accessible to everyone is at the heart of La Folle Journée festival in Nantes. From 30 January to 3 February, the city’s convention centre will be alive with the sound of Mozart, Brahms and their contemporaries as it hosts around 250 concerts. Each performance lasts under an hour and tickets are affordably priced, so it’s the perfect entry into the genre for those wary of attending a full-length show. The concept has proven so popular that it has since been adopted by other cities worldwide, from Warsaw to Tokyo.www.follejournee.fr

Charente’s chamber music festival features musicians from across the world giving performances in various venues in Chalais and the wider Charente département over five weekends from 4 May to 2 June. Recitals are followed by receptions, children’s events and opportunities to meet the musicians. After Sunday afternoon concerts, visitors have the chance to sample local food and drink at a farmer’s market. www.chalaismusique.com

Choral music from around the world is celebrated at the Festival de la Voix in Châteauroux from 17-19 May. The free concerts feature classical and contemporary works by international artists and talented amateur choirs, complemented by masterclasses and workshops led by composers and conductors. Launched in 2006, the festival brings together choral music, cinema, dance, video and visual art.

The sounds of classical, traditional and jazz music will resound at this music festival taking place in the Loiret département from mid- May to mid- June. Concerts are held on Thursdays to Sundays in historical sites such as the Château de Sully-sur-Loire. The line-up is always diverse, with something for everyone. www.festival-sully.fr

This festival takes place every year in the impressive Gallo-Roman Fourvière amphitheatre above the city of Lyon. It is a multi-disciplinary festival, championing music, dance, theatre, opera and even circus acts, and attracts a huge number of spectators for the 60 some performances. www.nuitsdefourviere.com

2019 sees the 150th anniversary of this popular festival of classical music, opera and the lyrical arts. With a name derived from ancient Greek, it seems only fitting that the main venue is the stunningly atmospheric Théâtre Antique in Orange. The surprisingly well-preserved Roman amphitheatre dates back to early in the 1st century AD and seats over 8,000 music enthusiasts. www.choregies.fr

Primarily a celebration of classical music, this city-based festival also features other musical genres such as jazz and world music, aiming to make all types of classical and contemporary music more accessible to all sorts of listener. Venues are almost as impressive as the concerts, and include the likes of the Saint-Remi Basilica, the Palais du Tau, the Opera and even the area in front of the main rail station. Many shows are free of charge and shuttle buses operate to make it easier to get across the city from venue to venue. The highlight of each year is a huge outdoor picnic, which in 2019 (the 30th Flâneries Musicales) takes place on 20 July.www.flaneriesreims.com

The world-famous Festival d’Aix-en-Provence takes place every year in the former capital of Provence. One of the most important opera festivals in the cultural calendar, the event feature full-scale works by various composers as well as orchestral, chamber and other vocal performances. The festival plays host to some of the world’s leading musicians and singers from 3-22 July in a variety of venues in the town, including outdoors under the stars at the Théâtre de l’Archevêché. www.festival-aix.com

Every year during the first two weeks of July, the picturesque Alsace town of Colmar plays host to a festival described by the New York Times as being one of the Top 10 Festivals in Europe. A different theme is decided each year, but classical music and orchestral works are usually the main focus of the programme. The 31st edition of the festival, in 2019, will be a Tribute to Claudio Abaddo – one of the most respected and celebrated conductors of the 20th century- with Vladimir Spivakov as artistic director. Each concert or performance takes place in a historic building as venue. www.festival-colmar.com

The Festival de Musique in Menton attracts an international line-up of classical music artists to this picturesque Riviera town. Many concerts are held outside on the baroque square in front of the Basilique Saint-Michel-Archange in the old town, which offers audiences scenic views of the Mediterranean. www.festival-musique-menton.fr

Featuring a variety of classical and contemporary music, as well as more visual performances, this festival was started in 2005 and attracts large numbers of visitors to the area as well as a large number of acts. Concerts take place in various venues around the town and the surrounding area. festival1001notes.com

As the name suggests, this festival exists to celebrate the work of French romantic composer Louis-Hector Berlioz, but the event also features a wide variety of other orchestral pieces from a variety of composers. Performancves take place in the impressive Château Louis XI, as well as local churches and the Musée Hector Berlioz. In addition to concerts, the festival features free of chare events as well2019 marks 150 years since Berlioz’s death and the programme for the festival is sure to be an exciting one. www.festivalberlioz.com

A little different from many of the other classical music festivals in the calendar, this focuses on opera, baroque and early music. The event has been running for 40 years this year and no wonder, since the main venue is the stunning Benedictine Abbey Notre-Dame d’Ambronay which has superb acoustics. Other venues include the surrounding area, such as the Monastery of Brou and the Théâtre in Bourg- en-Bresse. festival.ambronay.org

Previous Article Quiz: Do you know the French words for these animals?
Next Article Education options for expat children in France