WIN! A copy of How to Read Paris 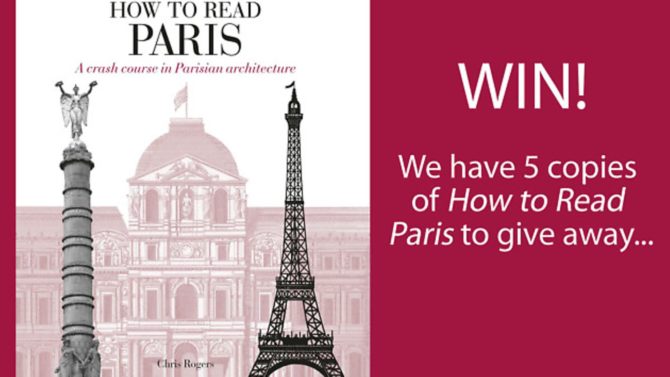 One of the world’s most visited cities, Paris is also one of its most architecturally stimulating. Architects, artists and designers have been drawn to the French capital for centuries and, despite Haussmann’s 19th-century designs to reshape it into aesthetic order, it retains many architectural gems that reveal its multi-faceted past. Features from Roman and medieval times rub shoulders with those from the Baroque and Rococo eras and from major 20th-century movements Art Nouveau and Art Deco.

This fascinating pocket guide takes in everything from the neo-classical colonnades of the Panthéon to the steel and glass futurism of La Défense, working its way through chronologically and providing the reader with an initial tutorial in looking for clues as you wander the city streets. Each individual building or place is annotated with its location, date and architect(s) plus plan, drawings and photographs – and world-renowned icons are interspersed with lesser known gems worth any visitor’s discovery. Each chapter, devoted to a different architectural era, is opened by a handy location map to facilitate easy exploring.

With 20 years of research to his name, Chris Rogers is an authority on visual culture and leads architectural tours as well as working closely with architects. His knowledge of Paris has evolved over a dozen years of tramping the trottoirsand building up an impressive photographic record of this City of Light.

We have five copies of How To Read Paris to give away. Click here to enter!