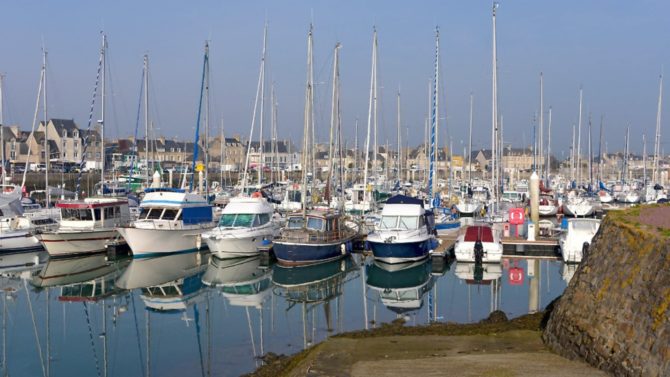 Saint-Vaast-la-Hougue has been named ‘France’s favourite village 2019’. Explore all of this year’s 14 finalists and vote in our poll to let us know which one is your favourite

French television programme Le Village Préféré des Français returned on 26 June, on France 3. The programme has been running since 2012 and has become cult viewing. A public vote for the favourite village took place in March and the programme explored the 14 villages – one from each region of France and an overseas territory, and announced the winner. Take a look at this year’s finalists here and tell us which one you would have voted for.

Starting last year, France’s overseas territories now get an entry in the Village Préféré competition and this year the entry is Terre-de-Haut – a village on a small island, part of Guadeloupe, in the Caribbean Sea. Houses in the village are white and pink with red roofs, while the turquoise waters in the bay attract a big international sailing scene.

Known for its 11th-century Église de Saint-Pierre-et-Saint-Paul which attracts pilgrims to the burial place of St. Mayeul and St.Odilon, Souvigny is a heritage rich village in central France an hour north of Vichy. The Bourbon family once owned one of the many maisons-fortes in the area. There is also a museum containing interesting artefacts from the town’s past.

Settled amongst the forested hills of Doubs, Mouthier-Haute-Pierre has population of only 323 residents. A cluster of old houses sit on the edge of the river Loue, which has its source just outside of the commune’s boundaries, while the Gorges de Nouailles canyon is a striking natural feature. The small village is surrounded by cherry trees which provide fruit for the production of Kirsch.

A haven for artists and craftspeople Pont-Croix in north-west France, has exhibitions on show all year round. Painters are inspired by life on the cobbled streets, the tranquillity of the River Goyen, and the beautiful architecture of the Notre Dame de Roscudon. The 16th-century houses are built from granite or stone and there is a heritage museum, Marquisat, in a former noble house, home of the lords of Rosmadec.

A remarkable 19th-century castle, stables, renaissance buildings and a stunning garden designed by Monsieur Dulong de Rosnay all form part of the Parc du Château de Frazé which pulls in tourists to Fraze. The river Foussarde scuttles through the tiny 500-inhabitant village on the edge of the Parc naturel régional du Perche.

Featuring the listed historic monument Tour d’Erbalunga – a ruined Genoese tower perched on the rocky shore – Erbalunga is a small fishing village with a charming little marina on the eastern coast of Corsica. A number of cafes and restaurant welcome visitors to the town and palm trees and plant-pots decorate the paved streets.

Just south of the beautiful Forêt de Retz, medieval village La Ferté-Milon in the Ourcq Valley is centred on the Ourcq river. Construction of the Château de la Ferté-Milon was first ordered by Louis of Orleans in the late 1300s and some remains of the ruined castle still stand in the village today. Less than two hours from Paris, a train runs to the capital every hour from the village’s train station.

Home, at various points, to successful painters including Auguste Allongé, Eugène Cicéri and Charles Delort and the location for Jean Renoir’s first film in 1924, Bourron-Marlotte sits just below the Forêt de Fontainebleau in Ile-de-France. Vines and trees decorate the roads and stone houses.

Saint-Vaast-la-Hougue features two heritage listed Vauban towers once built as part of fortifications intended to protect the harbour. The busy marina is full of small boats and surrounded by restaurants. Oysters from the area are well known for their subtle nutty flavour and are a treat for food lovers.

Mornac-sur-Seudre, Charente-Maritime, Nouvelle AquitaineSurrounded by marshes where salt and oysters are produced, Mornac-sur-Seudre is less that half an hour from the west coast of France. Charming white houses with red tiled roofs and colourful shutters are typical of Charente-Maritime. The village’s Église Saint-Pierre is a Romanesque church built in the 11th century.

Paved in dark cobblestone with cream and grey buildings, this picturesque village on a hill enjoys stunning views over the surrounding valleys. The historically wealthy bastide town regularly holds markets and festivals, and is also a stop along the pilgrimage to Santiago de Compostela.

Dusty pink and red houses amongst lush green Mediterranean countryside, Cotignac exudes typically Provençal style. Sitting at the foot of a limestone cliff-face, the alleys and squares in this lively village have ample cafes and markets for visitors and residents to enjoy. While, the Cascades des Trompines are two 25m waterfalls in the village that look beautiful when lit up by the sun.

Last but not least, Le Thoureil is situated in the Parc naturel régional Loire-Anjou-Touraine close to the town of Angers. Stretched thinly along the south bank of the vast river Loire, the former port town, which prospered from the wine trade in the 17th and 18th centuries, is a great place to relax and enjoy the beauty of nature.