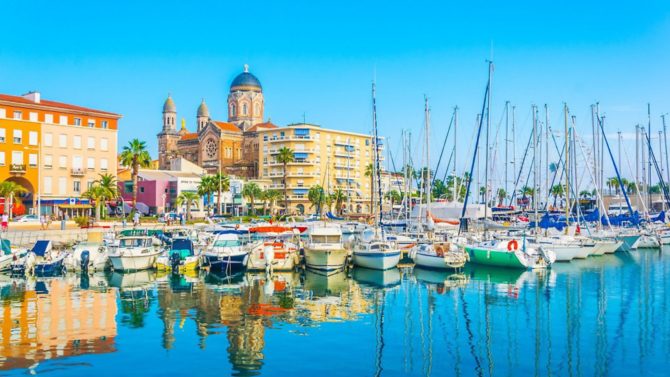 Finding somewhere in the south of France that is within walking distance of the sea, and which is also in good condition and rentable for €200,000 or less isn’t easy, but it is possible.

From Cannes la Bocca to Mandelieu and Théoule-sur-Mer

With a househunting budget of €200,000 or less on the Côte d’Azur you’re likely to be looking at a studio or one-bedroom apartment.

Robert Novak, an estate agent with Leggett Immobilier says that lock-up-and-leave apartments, on or close to the beach, are easily achievable for that price in Cannes la Bocca, where apartments start at around €4,100/m2, and in Mandelieu-la-Napoule and Théoule-sur-Mer.

Cannes la Bocca and Mandelieu sit on the 8km coastline curve of the Plage du Midi, which stretches from central Cannes to Château de la Napoule, at the border of Théoule-sur-Mer and its beach. “Because the Plage du Midi is prime beach territory, apartments in this area rent out very well during the tourist season (May to September),” says Robert. Cannes la Bocca is so affordable because it has traditionally been an undervalued area of Cannes. “That is changing, literally right now,” he says, explaining that Cannes’ current mayor, David Lisnard has been overseeing the Bocca Cabana urban renewal project since 2015 to improve the town centre and the coastal area. It is due for completion this year. Similarly, Mandelieu’s mayor, Sébastien LeRoy, has been successfully overseeing an urban regeneration project on the western border of the Plage du Midi at La Napoule, which was classified as a historical landmark in 1993.

Mandelieu is the town Novak thinks has the best investment potential for buyers. He gives three major reasons: good access (Mandelieu has two A8 motorway exits, which he says is useful during tourist season), its proximity to Cannes and the unique “magical” ambiance from the canal and river system.

By driving half an hour south-west of Cannes to Fréjus and St-Raphaël, it is possible to find properties near the sea, as well as in Fréjus village. Although the seaside here is a bustling location with a ‘vieux quartier’, some prefer to invest in the village as properties here can work better for all-year-round rentals. Reaching the sea from Fréjus village, which contains an array of Roman remains, takes between 20 minutes and half an hour on foot. With average apartment prices starting at €2,870/m2, prices are cheaper here than in most other popular seaside resorts on the Rivera.

Charles Kennard at Leggett Immobilier is at a loss as to why prices are cheaper in this area. “It seems to have somehow escaped some of the history and glitzy background of the Côte d’Azur generally,” he says. “The area has also escaped some of the high-rise development, and so it is more quaint-looking in terms of that holiday strip location,” he adds.

Author Hannah Fielding on finding inspiration on the Côte d’Azur

Beachside bargains on the Occitan Riviera

The department of Aude, between Hérault and Pyrénées-Orientales on the Occitanie coastline, is the most likely place to find a good-value holiday home on the Med.

Narbonne is another town with Roman history. Having been established in 118BC and become a key Roman port, it is today a popular seaside resort offering large expanses of beach at Narbonne Plage as well as a town full of charm and entertainment. The Narbo Via, a new archaeological museum opening in 2020, was designed by famous architect Norman Foster with help from French museum specialist Studio Adrien Gardère. It is a sign of how illustrious Narbonne is becoming. Yet, despite its growing fame, you can still pick up properties for under €200,000, both in the town itself (a 20-minute drive from the sea) and Narbonne Plage. Average prices start at around €1,550/m2, but for properties actually by the beach (which can often be a house with two or three bedrooms and a garden for under €200,000) buyers are looking at paying more like €3,440/m2.

For those interested in buying something that is aesthetically pleasing as well as practical, low budget and close to the beach, it is possible to find a property at Narbonne Plage, but far harder here than in the town or in surrounding villages.

Chitra Pullen of Pullen France real estate agency notes that a drawback of looking along this coastline is that some of the properties aren’t the prettiest looking. “I would always say put your money in a nice village house and drive down to the beach,” she says, referring to the small villages around the Canal du Midi where her agency has several properties on the market.

Tim Swannie, director of property specialist Home Hunts says that over the years so many improvements have been made to Narbonne that it has become a wise choice of location for property investment. “The beaches are huge and less crowded than the French Riviera, and the climate here is better than further inland,” he says. Narbonne’s Canal de la Robine draws the community together for walking, cycling and even wining and dining. As well as outdoor markets, Les Halles (Narbonne’s indoor market) is one of the most popular places to shop and eat out. “There are lovely little eateries there, as well as all the market stalls selling produce – the atmosphere is buzzing,” says Tim. “But Narbonne’s theatre, cathedral concerts, sports facilities, beaches and restaurants mean the whole town is lively with a wonderful uplifting ambiance.”

Once a small fishing village and situated between the sea and étangs (lagoons) in the heart of the Narbonne regional park, Gruissan is unsurprisingly acknowledged as one of France’s most beautiful villages. Blessed with three main beach areas, it provides a large range of places to stay depending on what your preferences are. The small, circular town has a historic centre that was built around a 10th-century château and properties in this area start at, on average, around the €2,000/m2mark.

The Plage des Chalets is arguably the most popular place to buy a holiday home by the beach in Gruissan. The beach houses made famous in the film Betty Blue never lose their popularity, but for under €200,000 you’re only likely to find a chalet that needs renovation work.

Little lock-up-and-leaves can be snapped up in the Gruissan port area, often for under €100,000, but Les Ayguades (a beach on the lagoon) and Plage des Mouettes, which are a little north of Gruissan Plage, are sprawling with little properties for under €200,000 that are close to the lagoons or Mediterranean Sea.

The attraction of the old town gives this area more buzz outside of the summer season, which is good news for those who need rental income. Not far from the salt flats – a result of the area’s salt production – pink-hued-waters are found at Les Salins de Gruissan, a visit to which is always a highlight even for the locals.

Near Mount Canigou, Leucate offers around 18km of golden sand and the village, with its colourful houses, is a 30-minute walk from the beach of La Franqui, one of the best-kept secrets on the Aude coastline. Popular for its port area, but also for Leucate Plage, this is a good place to marry property value with everything you need for a successful beach holiday. The white, sandy beach at La Franqui is bordered by the Mediterranean on one side and a lagoon on the other, leaving a thin strip of sand in the middle that leads to the five-mile Plage les Coussoules.

“La Franqui beach – one word for me is paradise, and in a way I don’t want to tell too many people,” says Anne Stapleton of Private Property Sellers.She explains that the tourist season runs from March to October with high season property rentals at €700, so those looking for rental income can be sure of a good yield during summer months, especially for properties within walking distance of La Franqui beach.

Even for less than €150,000 it is possible to find a one-bedroom beach house, with terraces and parking, next to La Franqui’s beach – the problem is that properties like this do not stay on the market for long as they are in high demand, so buyers need to act quickly if they see a home they want to buy.

“La Franqui offers good value property,” says Anne. “For those looking for a feel of seclusion and luxury, the white beaches in this area are simply stunning.”

Previous Article Which French village is your favourite?
Next Article 11 discoveries about life in France from Living France’s August issue