Where to buy property just across the Channel in northern France 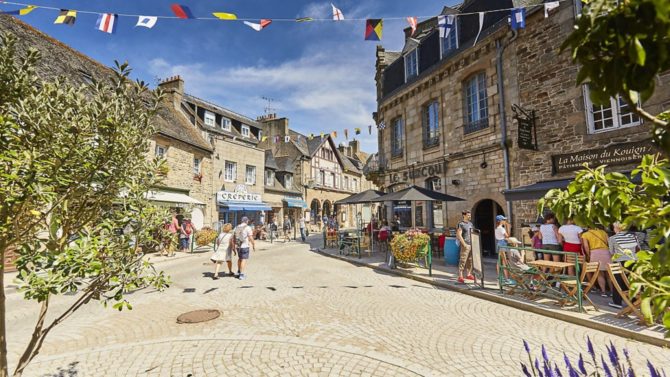 Some of France’s most beautiful beaches, villages and attractions are close to the ferry ports of Brittany, Normandy and Hauts de France, making northern France a great place to live or buy a holiday home

Here are just some of the things you could miss if you roll off the ferry in France and zoom south without looking back. A sky-piercing monastery on an enchanting island; a coastal footpath of huge pink boulders that glow orange at sunset; ancient mountains, rivers, lakes and forests; long sandy beaches and peaceful coves; the stomping grounds of William the Conqueror and Claude Monet; five World Heritage Sites – the list goes on.

All these can be found within minutes of leaving the Channel ports, making this sliver of northern France the perfect place for a weekend retreat or permanent home with easy access to the UK. Join us on a househunting journey along the coast.

Property near Calais and Dunkirk

What springs to mind when you think of the Somme? A bleak no-man’s land of mud and mayhem? Or gently rolling hills and pristine long beaches, forests and valleys, stunning châteaux and crumbling cob farms, food and music festivals, brocante sales in every village and UNESCO World Heritage-worthy cities? For anyone who knows the area well, it’s the latter and best of all it’s possible to finish working in London on a Friday evening and wake up the next morning in this beautiful part of France. Check out the stunning Opal Coast and enchanting communities such as Le Crotoy and St-Valéry-sur-Somme as well as the tranquil countryside and antique markets of Lille, Arras and Amiens.

Property in Nord, Pas-de-Calais and Somme is cheaper than further along the coast in Haute-Normandie, though prices are creeping up. A house in Somme, for example, costs an average of just €124,000 (as of Nov 2020) making it vastly cheaper than a home across the Channel in Sussex or Kent. Predictably the cities and Opal Coast beaches command the highest prices, especially the resorts of Le Touquet Paris-Plage (where a typical house will cost you €780,000) and Fort-Mahon-Plage as well as the ultra-accessible fishing port of Wissant, known as the Perle d’Opale.

If you’re prepared to drive just over an hour south of Calais, you can find quieter (and slightly cheaper) coastal spots such as Berck, St-Valéry and Le Crotoy, or come inland to the Seven Valleys, an attractive area of rolling farmland and forest. Houses in bustling Hesdin and legendary Azincourt, for example, cost a quarter of what you could find in Le Touquet.

Though not the popular seaside resort it once was, Dieppe is a gateway to the Côte d’Albâtre (Alabaster Coast) a 130km stretch of dramatic white chalk cliffs sculpted by time and tides. Within minutes of leaving the ferry you can be dining on oysters freshly plucked off Pourville-sur-Mer or strolling along the pebbly beach near Varengeville-sur-Mer where towering white cliffs stretch as far as you can see. Further on you’ll find the sandy resort of St-Aubin and the fishing and weaving village of Veules-les-Roses, a favourite haunt of Victor Hugo. To the south is the cathedral city of Rouen where Joan of Arc was burned at the stake, and the Boucles de la Seine Normande regional park where charming villages line the sinuous river. Like Le Havre, Dieppe is little more than two-and-a-half hours from Paris and close to the Plus Beaux Villages of Gerberoy and Lyons-la-Forêt as well as Claude Monet’s home in Giverny.

Houses in Seine-Maritime cost an average of €162,000, making the department more affordable than further west, though more expensive than further east. Around Dieppe, there are a handful of property hotspots, such as the coastal communities of Varengeville and St-Aubin, but a house here will still cost less than a seaside home in Calvados. Houses in the countryside of Eure, south of Seine-Maritime, do not cost significantly less, though prices fall the further south-west you travel and rise the closer you get to Honfleur in the north or Paris in the south-east.

9 French properties for sale at €99k

Guide to buying a property in Nord

The city of Le Havre, in Seine Maritime, celebrated its 500th anniversary in 2017 and its stark post-war architecture has UNESCO World Heritage status. Most visitors, though, quickly spread out to the beautiful locations in all directions. To the north-east are the magnificent white cliffs of the Alabaster Coast, perhaps best seen from the pebbly beach at Étretat with its iconic chalk arches. South-west over the Normandy Bridge lies the Côte Fleurie (Flowery Coast), long known as the Parisian Riviera because of its chic beach resorts. The crème-de-la-crème is Deauville, famous for its pristine white sands, colourful beach parasols and villas.

This coast also forms the northern edge of the Pays d’Auge, Normandy’s emblematic heartland of apple orchards, lush pasture and half-timbered (colombage) houses in picturesque communities such as Beuvron and Cormeilles. The Plus Beau Village of Le Bec Hellouin is worth a visit for its colourful colombage and its abbey, which provided England with three archbishops of Canterbury.

Welcome to Calvados, home of William the Conqueror, the D Day beaches, Camembert cheese, apple brandy and picture-postcard houses. The landscape around Caen’s ferry port at Ouistreham is one area that has not been overlooked by Brits. You’ll find us a hop, skip and jump from the port admiring the Bayeux Tapestry, remembering the fallen at Pegasus Bridge and enjoying the sunshine on the beaches stormed by the Allies in 1944. We sit in cafés around Honfleur marina, sun ourselves in impossibly elegant Deauville and gawp at the half-timbered houses in villages such as Beuvron-en-Auge. Head south through fields of maize and cattle into Orne and the regional park of Normandie-Maine and you find a landscape perfect for hiking, climbing, canoeing and horse-riding. Charming settlements include St-Céneri-le-Gérai, Lassay-les-Châteaux and Domfront.

When it comes to the property market, Calvados is the most expensive department on the Channel, especially the Côte Fleurie stretch between Ouistreham and Honfleur. Typically, you won’t get change from €400,000 for a house in Deauville where prices are more than double the department average of €188,000. However, Trouville, Caborg and Houlgate are slightly more affordable and the touristy marina town of Honfleur is not as expensive as you might think, at €220,000 for an average house. Beuvron-en-Auge, one of the Plus Beaux Villages de France, attracts a premium but other attractive Pays d’Auge settlements, such as the market town of Cormeilles in Eure, are significantly cheaper. Prices are also lower along the D-Day beaches, past Bayeux, and south-east, even in lovely communities such as Bernay and Le Bec Hellouin.

Directly south of Caen in the department of Orne, there are bargains to be had especially the western side around Domfront, though the thermal spa town of Bagnoles de l’Orne is pricier.

Fresh off the ferry, many Brits put their foot down and zoom through the Cotentin peninsula in a blur. But those who linger are rewarded. Turn left out of the port and within half an hour you’ll be in the traditional Norman fishing port of Barfleur, one of the Plus Beaux Villages de France. Half an hour in the other direction will bring you to the Cap de la Hague, a wild and atmospheric cape teeming with migratory birds, botanical treasures and the odd coastal path hiker. Running down the peninsula’s western flank are vast empty beaches with crashing surf and grassy dunes as well as little fishing ports and shelterered bays, offering views of the Iles de Chausey and Channel Islands.

Although the French are keen on Granville, a more popular spot for Brits is the cathedral city of Coutances, with its annual jazz festival, and inland communities close by such as Hambye, Cerisy-la-Salle, Torigni-sur-Vire and the market town of Villedieu-les-Poêles (famous for its coppersmiths.

Manche is the most affordable department on the Channel coastline with a typical home costing €145,000 and you can find a cheap and cheerful lock-up-and-leave for half that price if you come inland.

Within moments of exiting the ferry terminal in Brittany’s main port, you can be sunbathing on golden sands beside turquoise waters or exploring the walled city’s narrow cobbled streets. A hop across the Rance estuary brings you to the genteel resort of Dinard while a trip down its banks takes you through the Plus Beau Village of St-Suliac to Dinan, one of the best-preserved medieval towns in Brittany, and on to book town Bécherel, France’s answer to Hay-on-Wye. An hour’s drive east of St-Malo is one of the world’s biggest tourist attractions: the island of Mont-St-Michel and its iconic monastery. Travel west and you come to the Emerald Coast with its picturesque ports such as Binic and sandy resorts such as Sables-d’Or-les-Pins, Pleneuf-val-André and Erquy. While property is at a predictable premium in these tourism hotspots, prices still compare favourably with the Morbihan resorts on Brittany’s southern coastline.

Come inland and prices drop dramatically. Indeed, central Brittany is one of the most popular places in France for British buyers. The pretty little walled town of Moncontour and the attractive village of Jugon-les-Lacs are both around an hour’s drive from St-Malo. Come a bit further south and you’ll find the vast leisure lake Lac de Guerlédan, near the communes of Mûr-de-Bretagne and Gouarec, which both have strong expat communities. Lac au Duc, 90 minutes south of St-Malo at Ploermel, also has a leisure beach and is only 20 minutes from the château town of Josselin, a stunning medieval town on the River Oust. The Oust is part of the Nantes-to-Brest canal, an excellent long-distance cycle route and a good waterway to base your househunting search on, as are the Rivers Blavet (check out St-Nicholas-des-Eaux) and the Lié (check out La Chèze). All these areas, which straddle Côtes-d’Armor and northern Morbihan offer good value property, which gets cheaper the further west you go.

Waking up in Roscoff and driving south through artichoke fields is one of the nicest ways to arrive in France. The old granite town is not just a functional ferry port; it’s a beautiful Petite Cité de Caractère in its own right with attractive harbours, exotic gardens and the nearby Ile de Batz, an island perfect for a day trip. To the east lies the awe-inspiring Côte de Granit Rose around Perros-Guirec where huge pink granite boulders line the coastal footpath. To the west are stunning white sandy beaches – check out those around Santec, Cledar and Plouescat and don’t miss the fabulous Hamlet of Meneham where white sand and granite cottages blend with giant otherworldly rock formations.

To the south-west lies the sinuous shore of the Côte des Legendes with its mixture of wild Atlantic beaches and sheltered sandy coves. The sacred village of Locronan is within a 90-minute drive of Roscoff as is France’s longest cycle path the Velodyssée, the Nantes-to-Brest canal and Brittany’s ancient mountain range, les Monts d’Arrée in the Armorique regional park.

A house in Finistère costs an average of €156,000, although the city of Brest pushes up this average price and you can find much cheaper homes inland. Check out the medieval town of Morlaix (€120,000) and homes in and around Huelgoat, a large village famous for its forest and giant boulders. Some of the cheapest property in France is to be found in the countryside around towns such as Carhaix-Plouguer, Rostrenen and Callac where it’s not uncommon to see houses advertised for as little as €60,000, yet you’re only an hour or so from three coastlines.