What’s happening in France in 2018 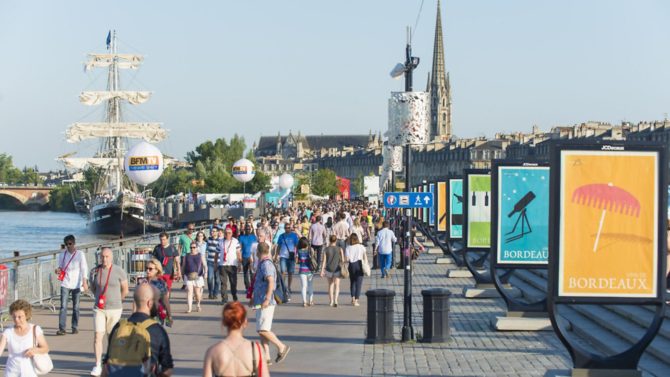 From major sporting events to museum openings and cultural festivities, there’s lots of things to keep you entertained in France in 2018

Centenary of end of The Great War, November 2018

A wealth of events, research projects and commemorative ceremonies have taken place over the last four years to mark the 100th anniversary of the First World War. The year 2018 marks the centenary of the end of the war and events to mark this include commemorations on 8 August of the start of the Battle of Amiens, the Allied offensive that led to the end of the war, and on Armistice Day on 11 November.

160th anniversary of apparitions at Lourdes

It’s been 160 years since a 14-year-old girl called Bernadette saw apparitions of the Virgin Mary at Lourdes and throughout 2018, the town in the foothills of the Pyrénées mountains will be marking the anniversary with special masses, ceremonies, processions and special pilgrimages.

This year, the world’s most famous cycling race stays almost solely in France, apart from a brief sojourn into Spain on one stage. At 3,329km, the 105th edition is the shortest in recent years but by no means does it let participants off lightly. The 21 days of racing includes a 35km team time trial on stage three, a classic finish at L’Alpe d’Huez after three days in the Alps, and then a grand finale of mountain stages in the Pyrénées, before the hilly 31km time trial on the final weekend will decide the winner of the yellow jersey.

Where to spend New Year’s Eve in France

This is why you should visit Paris in the winter

It’s so much more than just food and wine at the 20th year of Bordeaux’s iconic festival, as this year, the event will also be hosting the Tall Ships Regatta. Along the Garonne riverfront, visitors will be able to taste over 80 regional appellations (if they can manage it!) at the pop-up wine stalls, sample produce from 30 locals producers and marvel at the fleet of 30 tall ships as they arrive to the city to join in the celebrations.

After an absence of 10 years, the French Grand Prix is back at the newly reopened Circuit Paul Ricard in Le Castellet which last hosted the event in 1990. Expect all the fast-paced action and glamour that is usually associated with this sporting event.

Having been under construction since April 2016, anticipation to see this maritime museum is building. The opening of the museum that is set in the Bassins à Flot area of Bordeaux will coincide with 40 paintings by Monet that are being exhibited especially for the occasion.

For the first time, the Ryder Cup tournament will be taking place in France in 2018 at Le Golf National course near Versailles. Only the second time the event has been staged in continental Europe, the event is expected to attract 50,000 visitors each and an estimated 500 million television viewers from 200 countries will be watching! But we’re even more excited about the Junior Ryder Cup that’s taking place at Disneyland Paris from 24-September!

Winter has arrived in France

Opening in April 2018, this brand new museum is not only a great place to taste Normandy’s famous apple brandy but to learn more about its history, too. A visit to the museum incorporates sensory exhibits and tasting sessions in the Taste Bar where an expert guide will take visitors through the steps of tasting the local tipple!

After a long renovation and extension by architect Dominique Perrault, the famous racecourse is set to reopen with new brasseries and seminar spaces, a restaurant boasting panoramic views and a hanging garden, just in time for the warm weather. It’s time to place your bets!

It’s the 10th year Paris has hosted this sporting event that prides itself on “diversity, respect, equality and sharing”. The event is expecting 15,000 participants from over 70 countries and offers participants and visitors a unique opportunity to enjoy exclusive facilities such as stadiums including Stade Charléty, the Grand Palais, the Carreau du Temple, or stadium of Vaires-sur-Marne.

This is why we love living in France all year round

Where you can see the stars in France