What to eat at a French Christmas market 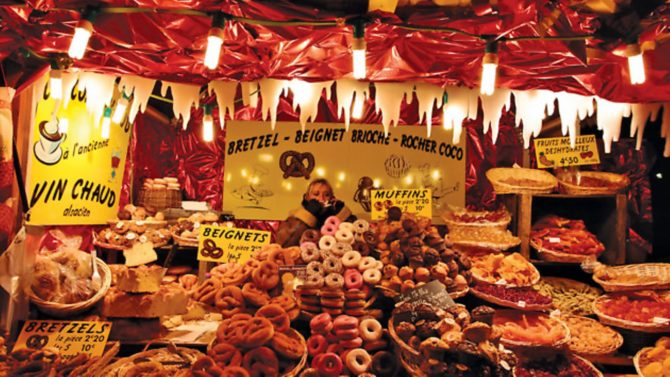 There are so many different food and drink stalls at French Christmas markets it can be difficult to decide, so here is our pick of traditional French treats to try at your local marché de Noël

Waffles are one of France’s favourite treats, whether sweet or savoury. You’ll find Flemish waffles on stalls at the market in Arras (capital of Pas-de-Calais) and at most Christmas markets.

You might not get to observe the ‘roasting on an open fire’ bit, but once you munch these hot from a paper cone as you wander, you won’t mind. Southern France is the greatest purveyor of this much-loved nut, especially the department of Ardèche.

Bitesize biscuits made in Alsace during the festive season. Varieties include almond, honey or lemon, anisbredele (with egg white and aniseed) and schwowebredele (with orange and cinnamon). They can be plain, glazed or decorated. Ask the stallholder to make up an assortment in a pretty tin.

Crunchy on the outside and fluffy within, these deep-fried choux pastry doughnuts rolled in sugar are the ultimate rib-sticking fodder for chilly evenings at a market. They’re equally popular for Mardi Gras and really superior in Paris. Head to the capital’s largest Christmas market in the business district of La Défense.

A pungent cow’s-milk cheese made in Hauts-de-France and sold at Lille’s Christmas market. There are over 80 stalls to browse here – you’ll smell this one before you see it.

A bretzel is basically a French version of a German pretzel which you will find in the Alsace Christmas markets. It is made from a brioche dough and there are many different sweet and savoury versions.

Unlike the macarons you will see in Parisian patisseries which are made from meringue, macarons d’Amiens are made from a paste of almonds and honey and you will find them at the Amiens Christmas market.

This traditional cake comes from the Picardy region and can be found at the Amiens Christmas market. It is a brioche-like cake in the shape of a chef’s hat made with a lot of eggs and butter!

Found at the Nice Christmas market socca are pancakes made from chickpea flour and are a speciality of Nice.

Vin chaud (to wash it all down)

Nothing warms icy fingers and chapped cheeks like a steaming glass of mulled wine. No market would be complete without it, often ladled from vast copper vats or poured from painted ceramic jugs. You’ll encounter different recipes in different parts of the country: some with more cinnamon, some more cloves, some adding a dash of something stronger. The red wine used is usually cheap and unremarkable – the magic happens when it’s heated and infused. Santé!

The ultimate guide to Christmas in France

The 13 traditional desserts eaten at Christmas in Provence