Picturesque cycle routes across France to try this summer 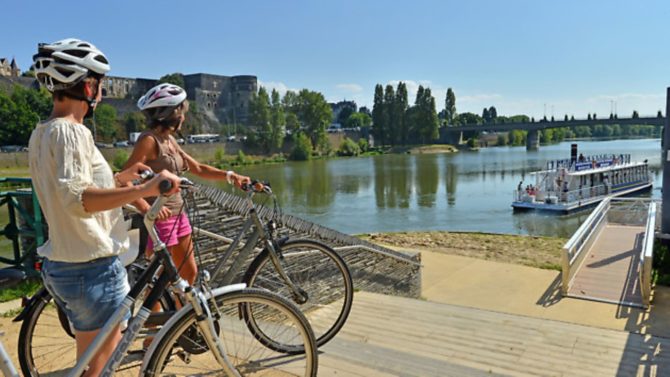 A popular cycle route, attracting more than 800,000 riders a year, is the Loire à Vélo. This 800-kilometre trail through the Loire Valley never ventures too far from the river and passes through a wealth of tourist sites. Highlights include the vine-clad slopes of Sancerre, the châteaux of Chambord, Villandry and Azay-le-Rideau, the tufa-limestone town of Saumur and the port of Nantes, where the trail ends. A railway line runs along the river from Orléans and there are around 20 stations with cycle access, so it is possible to join and leave the trail when you want.

Véloscenic is a 450-kilometre cycle trail created in 2012 that connects Paris with the abbey island of Mont-Saint-Michel in Normandy. This well-signposted route passes through beautiful countryside including the little-known Chevreuse Valley south of Versailles and the apple and pear orchards of the Bocage Normand, as well as the city of Chartres with its immense Gothic cathedral. Cyclists of all abilities can enjoy this trail, which contains long stretches of the car-free voies vertes (green ways).

Whether you are looking for a leisurely family cycle or a challenging ride, the 1,400-kilometre La Vélodyssée route from Brittany to the Spanish border has something to suit. Starting at Roscoff on the Breton coast, the route travels along the Loire estuary and down the Atlantic coast, passing canals, forests and beaches and showcasing the beauty of France’s varied landscapes. La Vélodyssée is signposted for the whole route and 80% is on designated car-free cycle lanes, making it an easy and safe path to follow. La Vélodyssée is divided into 15 sections, so can be tackled in bite-sized chunks, and details of bike hire and accommodation options are available on the website. For those who want to extend the challenge, cross the Channel by ferry and continue along the 160-kilometre cycle route from Plymouth to Ilfracombe.

A new cycle route in the west of France opens this June, making the country even more accessible on two wheels. La Vélo Francette starts at the ferry port of Ouistreham in Caen, allowing easy access to the D-Day beaches, and ends in picturesque La Rochelle on the west coast. Covering a total distance of 615 kilometres, La Vélo Francette passes through the Mayenne countryside, the Loire Valley, the Marais Poitevin and intersects with several other routes, including Loire à Vélo, Vélodyssée and Véloscénie, allowing you to cover as much of the north-western part of France as you wish.

Cyclists looking for something closer to home should try the Tour de Manche, a 1,200-kilometre route linking Brittany and Normandy with south-west England. The trail begins in the ferry port of Poole in Dorset and continues for 150 kilometres along the Jurassic Coast and through the Devon countryside to Plymouth, where cyclists take the ferry to Roscoff in Brittany. The trail then travels along the Côte du Granit Rose and Côte d’Émeraude before reaching Saint-Malo. From here the route runs parallel with the shorter Petit Tour de Manche up the Cotentin Peninsula to Cherbourg and the ferry back to Poole. http://en.tourdemanche.com

See France in all its diversity on EuroVélo 3, also known as the Véloroute des Pèlerins (The Pilgrims’ Route), which stretches from in Trondheim in Norway to Santiago de Compostela in north-west Spain. The French leg begins in Jeumont on the Belgian border and moves down through Île-de-France, the Loire Valley, Poitou-Charentes and the Bordeaux vineyards before joining up with EuroVélo 1 in Bayonne. The 151-kilometre Orléans to Tours section is the only French part to be fully signposted so far, but more sections are expected to be marked out by the end of 2016. www.francevelotourisme.com

Fun activities for children in France