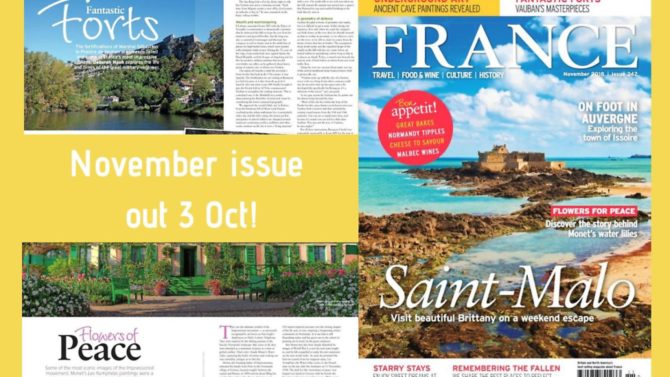 One of the best bits about working on FRANCE Magazine is learning something new about our favourite country every single day. Here we share with you some of the weird and wonderful things we discovered about the Hexagone while putting together your November issue…

1) The first French ballet shoes had high heels (can you imagine?)

It’s hard to picture graceful ballerinas dancing across the stage in heels, but in the 1680s that’s exactly what they would wear. It wasn’t until the following century that heels were shunned, when Marie Camargo of the Paris Opéra became the first ballerina to wear flat shoes. Heidi Fuller-love delves into the history of the humble pump in the next of our Icons series (page 81).

The first thing that springs to mind when you think of Calvados is the gorgeous apple brandy, right? Well, it’s got competition in the form of cider and now gin, as Editor Lara finds out on an apple-y adventure in the Normandy countryside (page 68).

Film buffs, you’ll like this one. The team at Hiventy are painstakingly restoring classic French films like Alain Resnais’ Last Year at Marienbad, which has just been released on DVD and Blu-ray. Pierre de Villiers discovers what it takes to transform an old classic into a modern masterpiece (page 83).

4) Paris is home to the world’s only vampire museum

Fittingly located down a dark alleyway on the outskirts of Paris is this unique institution, unearthed by Assistant Editor Steve while researching the best place to spend Halloween in the capital (page 26). The exhibits may only take up one room but there’s plenty to see, from film posters to a vampire protection kit…

5) Vauban might have been Louis XIV’s right-hand man, but he was no fawning servant

“Each time Your Majesty creates a new office, God creates an imbecile to buy it,” the Marshal once said about the king’s selling of titles. Find out more about the fortress supremo as Deborah Nash follows in his footsteps (page 38).

We were surprised this Giverny gem didn’t come out on top – can you guess where does? See if you’re right in David Atkinson’s fascinating article on Les Nymphéas (page 30).

She was named Star Baker in week one and has been wowing us with her culinary creations ever since. So when we asked Manon what her go-to snack was, we were pretty surprised when she came back with the simple treat of bread and butter (page 72). You can’t go wrong with that!

Think of French cave art and it’s probably Lascaux that immediately comes to mind, but Ariège is also home to its fair share of underground art galleries. One of the best-known is the Grotte de Niaux, which involves an 800m trek in torchlight to view the magnificent prehistoric paintings (page 48).

So what are you waiting for? The November 2018 issue of FRANCE Magazine is now on sale – order your copy now.

Previous Article WIN! The FRANCE Calendar 2019
Next Article How to bake in an old French bread oven