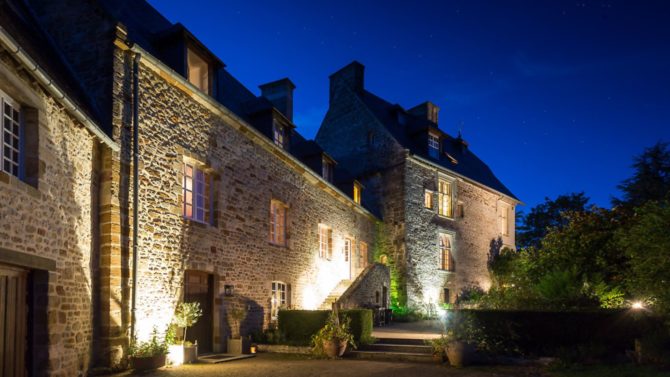 Renovating and living in a vast château by herself wasn’t the original plan for the owner of Le Vieux Château in Le Renouard, Basse-Normandie, but taking a brave leap into the unknown has definitely paid off

For many, living in a sumptuous 1,000-year-old château with beautiful grounds in the unspoilt Normandy countryside would be the realisation of a wonderful dream.

However, when Donna McDougall moved to Le Vieux Château with her partner Brian in 2012, she wasn’t entirely sure that life in France would suit her.

“When Brian – a fluent French speaker who’d spent summers in the country as a child – suggested the move, I was a little unsure. I was very happy living in Wiltshire at the time, having just purchased a delightful cottage, while working part-time as a veterinary surgeon,” she explains.

However, when the pair began to explore Normandy, she was taken with the area of Pays d’Auge and she and Brian began their house-hunting in earnest with a view to purchasing a large property, where Donna could also stable horses.

“Pays d’Auge is one of two areas in Normandy that isn’t flat, with wonderful hills and valleys,” explains Donna. “It really is a beautiful location.”

Despite their desire for a large house, the pair had never envisaged purchasing a château, and even when they first visited the property had no idea of its scale.

“Although we were told that there was a house for sale in the area, we didn’t realise that it was a château,” says Donna. “But despite its size and the works needed, once we saw the property we fell in love.”

The couple purchased the château in 2012 with a plan to renovate and restore the uninhabitable parts of the building and spend six months each year in situ.

“The main part of the house was in good order so it wasn’t a wreck, despite some of the buildings being uninhabitable,” says Donna. “We planned to do the work slowly; there was no rush to get things completed.”

However, 18 months down the line, the pair’s relationship came to an end.

“My partner moved back to the UK and I was left with a choice,” Donna explains. “Do I stay here, complete the renovations and start a business; or do I sell up and go back?”

Despite having no experience in the hospitality industry, Donna took a brave leap into the unknown, opting to complete the renovations to a tighter deadline and open the ancient building as a chambres d’hotes.

“As I was left ‘holding the baby’ things had to change,” she explains. “I needed to get the renovation work completed so that I could begin to earn an income.”

While Donna employed local artisans “with the aid of Google translate” to complete the construction work, she threw herself into the design and decoration of the enormous building.

“My passion and hobby has always been decorating, and there are some auction houses in the UK that know me by name,” she explains. “There is nothing more exciting for me to contemplate than designing a room which is empty and a blank canvas.”

What happens after you move to France?

The finished château is breathtakingly beautiful, and decorated in a truly eclectic style. Rather than sticking to a particular period in terms of furnishings or décor, the fact that the property is over 1,000 years old has given Donna licence to draw inspiration from a wealth of different periods.

“It’s almost impossible to be contemporary with the château. I’d have to put reeds on the floor and we’d have to sit on lumps of stone!” laughs Donna. “It’s not like in England where you might buy a Georgian rectory and source Georgian furniture – here I have free reign to mix and match, as it’s impossible to replicate that authentic period style.”

When it comes to decoration, Donna tends to take inspiration from an object or scrap of cloth she finds beautiful, transferring that style and colour scheme to the rest of the room.

“For one of the guest rooms, named ‘chambre d’or’, I found a beautiful piece of blue and gold fabric,” she explains. “I loved the rich colours and decided to carry the theme throughout the room. For the red room, I bought a gorgeous bedspread, and this inspired me to create red accents with other furnishings too.”

The more unusually named ‘rocking horse’ and ‘dragon’ guest rooms were both inspired by circumstance.

The imaginatively named ‘dragon room’ was inspired by a friend’s comment on the giant metal rings attached to an outside wall. “When I first bought the château, a girlfriend came over and she noticed these metal rings attached to the outside wall,” explains Donna. “She asked what they were for and when I said I didn’t know, she replied ‘oh, I know! They’re for tying your dragon to when you fly into the tower!’ It’s been the dragon room ever since.”

The bedrooms are all a generous size and three of the four are furnished with four-poster beds, which enhance the romantic atmosphere. Original features are highlighted, with exposed beams and enormous stone fireplaces unspoilt by time reminding guests that they are sleeping in a historical building.

“The château has such a rich history,” explains Donna. “It was built some time in the 900s and was owned by the Balliol family who lived here for 12 generations. This is what saved the château – many of the houses from this age disappeared in the 15th and 16th century, but the family lived here until 1600.”

The château has a noble heritage, with two Balliol Kings of Scotland born there in the 13th century, and it was also home to 18th-century French national heroine Charlotte Corday, who famously stabbed Marat in the bath during the French revolution.

“Her assassination of Marat is widely believed to have ended the use of the guillotine in the Revolution,” explains Donna. “She is revered in France.”

Despite its size and chequered history, guests have commented that the château has a ‘homely’ feel. “Guests often say that it feels like a home,” says Donna. “That pleases me greatly, as to create that sort of atmosphere in such enormous rooms is a real achievement.”

Part of the reason why guests from the UK feel at home in the château may be Donna’s use of English furniture.

“Virtually everything in the house has come from England,” admits Donna. “I often bid on online auctions and then go over to collect a piece if I feel it will fit well with the décor here. There are items here from every century apart from the 20th – my love of furniture stops when Queen Victoria rose to the throne!”

French visitors are taken with the château too, despite its English furniture, and the chambres d’hotes is usually booked up throughout its open season from March to September. And with the stables now housing two Shetland ponies, which Donna says were “bought to entice my great nieces over to stay more often,” guests also have the opportunity during their stay to take a picnic and disappear on a woodland walk with one of these gentle animals carrying the refreshments.

As for the winter, despite living alone in a vast château – other than when daughter Lily is over for a visit – Donna never feels isolated. “You’d think I’d feel lost, but I really don’t,” she says. “I’m closed from 31 October to 1 March and during that time I shut off many of the rooms as it wouldn’t be economical to heat them.”

And there are plenty of people around. “I was worried when I came here that I wouldn’t find it hospitable, but it’s been a complete revelation how nice people in this part of the world are. I have lots of friends locally and there’s plenty to do.”

Despite the size of the house and gardens, and having initially enlisted local workers to help fell excess trees and tidy up the overgrown grounds, Donna now manages her 30 acres with only minimal help. “I have a gardener coming in weekly to help with the main gardens, which cover an acre and a half,” she says. “The other 28 are used in part to graze my horses, and there’s a large field where I let a local farmer cut and keep the hay, reserving enough to feed my horses first.”

Amazingly, Donna also manages all the housework herself, even when guests are in residence. “Although it’s big, there are only four guest rooms,” she says. “And it’s much better than going to the gym! Sometimes I’m carrying a few extra pounds after the winter, but I’m whippet-thin by the end of the season!”

Another surprise for Donna has been the pleasure she has in dealing with her guests. “When you’re a veterinary surgeon, you’re often dealing with people who are stressed about their animals,” she says. “But when you’re doing this type of work, people just want to have fun!”

“I’m loving life here, I’ve made fabulous friends and established a new business I enjoy,” she says. “In fact, aside from the initial upheaval, the whole experience has been one of the best things that have happened to me.”