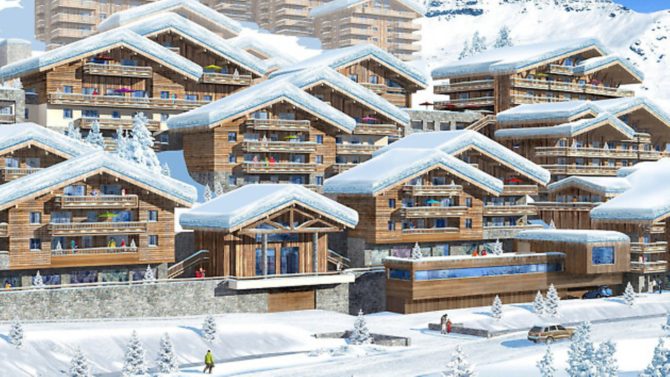 Work will be well underway when the Tour de France riders arrive in July, say developers

New ski apartments which form part of Le Village de Lessy, a four-star résidence de tourisme in Le Chinaillon in the French Alps, have proved so popular that the developer, MGM French Properties, is building another résidence in the village.

Le Chinaillon is the family-friendly ski resort which serves the Savoyard market town of Le Grand-Bornand.

Construction work on the 120 apartments overlooking the ski slopes in the new mountain-side résidence – Le Roc des Tours – will be well under way by the time cyclists competing in this year’s Tour de France arrive in Le Grand-Bornand on Friday, July 19.

“The first 90 properties will be ready for occupation before the end of next year,” reports Richard Deans of MGM’s UK sales office in London.

Located an altitude of 1,300 metres in the Les Aravis ski area, midway between Mont Blanc and Lake Annecy, Le Chinaillon is five minutes by car or local bus from Le Grand-Bornand. Geneva Airport is less than an hour away by road.

Le Chinaillon has year-round popularity, with skiing and snowboarding giving way to walking and golf in the summer months, as well as sailing and water sports on nearby Lake Annecy.

“The good news for skiers is that if talks between rival mountain villages finally come to fruition, Chinaillon’s 90 kilometres of tree-lined ski runs could be linked with the 130 kilometres of nearby La Clusaz and Saint Jean de Sixt,” says Richard.

Unusually for an MGM résidence, a bar and restaurant will be incorporated within the new development. Other facilities will include a sauna, jacuzzi, steam and fitness rooms. An OdesCimes spa and beauty centre will have a variety of massages and body treatments on offer.

Off-plan prices of the new apartments still available at Le Roc des Tours start at €338,000 for a three-bedroom duplex property of 73 sq m. Prices exclude French VAT at 19.6 per cent which is waived under the leaseback scheme.

MGM offers investors a variety of leaseback options. Typically a two-bedroom leaseback apartment comes with a guaranteed gross annual rental income of around €5,500 as well as three, four or six weeks of personal use of the property. MGM’s flexible approach means that dates can be arranged to meet the requirements of clients.