Who Gers wins! Why bold Brits move to this part of France 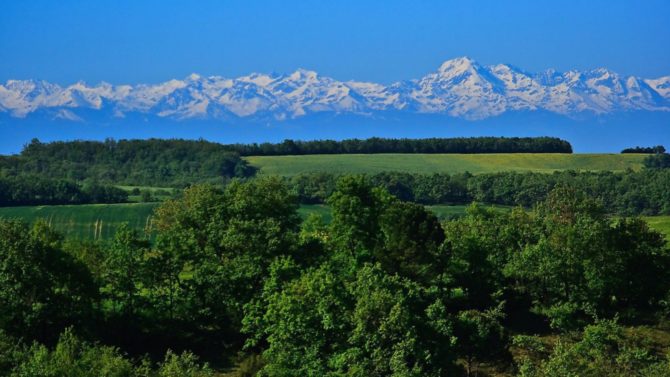 The corner of south-west France that gave us the swashbuckling musketeer D’Artagnan also seems to attract a confident and brave breed of British expat, finds Ruth Wood

Sir Terry Wogan once told us Gers was “a rubbish place” and threatened to hunt us down if we told the world about it. He had a twinkle in his eye at the time, but we can understand why the late veteran broadcaster was loathed to share this unspoilt corner of Gascony with its pure air, sparse population and Tuscan-like beauty.

Of course, if Sir Terry had really wanted to keep the secret to himself, he should have challenged us to a duel. Gers is, after all, the birthplace of the man immortalised as swashbuckling hero D’Artagnan in the legendary adventure novel The Three Musketeers. Comte d’Artagnan Charles Ogier de Batz de Castlemore was born in Lupiac in 1611 and did indeed rise from humble beginnings to become captain of the Musketeers of the Guard, a fact celebrated every August in the village’s D’Artagnan festival.

The Gascon musketeer spirit can resurface at the most unexpected moments, according to property consultant Sarah Francis, who works with French estate agents to match châteaux and other prestige properties with international clients. “I once went to meet an agent in Montréal du Gers who describes himself as an ‘enfant du pays’ or child of the Gers countryside,” she says. “No sooner had I arrived than two local dignitaries arrived and I was introduced as a ‘sujet de la Reine, mais Gasconne de coeur’ (subject of the Queen but Gascon at heart). The two immediately gave a deep chivalrous bow, ending with a flourish as though removing a feathered hat as would a Gascon musketeer. It was very funny!”

Something of this adventurous spirit also seems to pervade the British expat community of Gers, according to local estate agent Victoria Headdon. “My experience of Brits who buy here is that they’re quite independent, self-sufficient and confident,” says Victoria, founding director of Compass Immobilier. “Quite a lot of them buy here because they don’t feel they need the support of a big British expat community. Some have previously lived in Dordogne but have sold up and moved further south in search peace and quiet. You don’t hear a lot of English spoken at the markets, other than in summer, and a lot of Brits here are very well integrated and speak reasonably good French.”

Nicknamed ‘Little Tuscany’ by the French, Gers is a rolling landscape of sunflowers and vineyards with horizon views of the snowcapped Pyrénées. Within striking distance of Spain, the Pyrénées, the Atlantic coast and Toulouse, yet far enough away to be its own land, it has no city and its capital Auch has fewer than 22,000 inhabitants.

The department is one of the least populated areas of western Europe and boasts some of the cleanest air on the continent, which may also explain why life expectancy is particularly high. “The sort of people who do well here are people who love the countryside, peace and privacy,” says Victoria. “There are some days when I don’t see another car on my 20-minute drive to work. That’s not to say there isn’t a lot going on. Every village has its fête locale and there are lots of major events. But it’s never too crowded and you can just get away from it all if you want.”

My advice for people moving to France is…

Victoria remembers when the late rock n roll star Johnny Halliday, France’s answer to Elvis, dropped into the town of Fleurance. “He walked round the market doing his shopping; then had a coffee at the Café du Centre, and nobody bothered him,” said Victoria. “The Gers is one of the few places where a celebrity can still do that.”

Despite its remote geography, Gers has excellent broadband, with internet speeds faster even than much of London. This has attracted younger expats, including digital professionals who can work from home or on the move.

Slap bang in the heart of Gers, department capital Auch is the closest major town for most people, though those on the fringes look across the border to bigger urban centres such as Toulouse, Tarbes, Pau, Mont-de-Marsan and Agen, which has high-speed rail links to Bordeaux and Paris. Perhaps the most pictured building in Auch after its cathedral is its tourist office, the four-storey half-timbered Maison à Colombages, which provides the perfect backdrop for the town’s Saturday market. Duck, foie gras, garlic, melon, wines, cheeses and all manner of Gersois produce is on offer, especially organic food, says Victoria. “DJ Andy Cato who used to be in the band Groove Armada now lives south of Auch and runs an organic farm producing flour and artisan bread,” she says. “He brings his bread to Auch market and apparently he has queues back up to the main square every Saturday morning.”

An average house in Gers is a whopping €100,000 cheaper than the neighbouring departments of Haute Garonne to its east or Gironde to its north-west, where prices are influenced by Toulouse and Bordeaux respectively. A typical home in the department is €10,000 more expensive than Lot-et-Garonne or Dordogne to the north, but this is partly due to the high prices on the far eastern fringes, which are within the Toulouse commuter belt. An average home in the eastern town of L’Isle Jourdain, for example, will set you back €220,000 whereas a similar property in the northern town of Condom costs less than €88,000.

The north – brandy and bastides

When Brits first started drifting down to Gers from the Dordogne and Lot valleys, the undulating landscape of north-west was where most settled. It’s the heart of Armagnac country – the famous brandy has been produced here for at least 700 years – and is full of handsome old wineries and big farmhouses, often built from local sandstone.

The north-east is a countryside of sunflowers, wheat and juicy melons revolving around the attractive towns of Fleurance and Lectoure, and likewise features substantial farmhouses with the distinctive gently sloping roofs of the region.

Strung across the north are several beautiful fortified villages and towns (bastides), three of which cluster around the cathedral town of Condom, a sub-prefecture of Gers. They are Gascony’s oldest bastide Montréal, the tiny bastide of Larressingle (nicknamed Petit Carcassonne) and Fourcès, a pretty walled village known for its oval-shaped central place.

Popular market towns include Vic-Fezensac and Eauze, both known for the traditional half-timbered (colombage) buildings common in the west near the Landes border.

In much of Gers the soil is clay and not suitable for wine cellars, says Edward Landau, of local estate agency Le-Bonheur. So many properties have a chai, an above-ground wine storeroom, some still containing a wine press and oak barrels. Often these are large stone buildings that can be converted into fine gîtes or, if ruined, turned into walled courtyards, perhaps for a pool. “Most of the rural properties you see were originally self-sufficient smallholdings, so you’re likely to find a pigeonnier and also a porcherie (where the pigs lived) with a pouleterie above to keep the chickens away from the foxes,” adds Edward. “The latter tend to be too small to convert into accommodation but often make nice pool houses, summer kitchens or barbecue areas.”

The south – Sea, ski, jets and all that jazz

Steeper ground and more woodland characterise the south, which is an outdoor lover’s paradise. Despite having relatively little infrastructure, it is still a fairly affluent corner of Gers, perhaps thanks its world-class wine and the relative proximity of the mountains and sea. It also owes its allure to Marciac, a tiny village that hosts 200,000 visitors a year at its international jazz festival every summer.

Although the Pyrénées are too far away to significantly affect the climate in southern Gers, a day trip skiing or hiking is perfectly feasible as is a day on the Atlantic coast. The ancient vineyards of the Madiran appellation, centred on the eponymous village just over the border in Haute-Pyrénées, stretch into Gers and produce a red wine regularly ranked one of the best (and healthiest) in the world.

Moving east you enter a historically less affluent patch featuring lots of farmhouses made of mud bricks. This is reflected in the property prices, and the environs of the pleasant bastides of Miélan and Masseube are among the cheapest places to live in the whole department.

The picture changes dramatically, however, as soon as you enter the commuter belt for Toulouse on the south-eastern edge of the department. The most expensive pocket of Gers is around the cosmopolitan riverside town of L’Isle Jourdain, which is within half an hour’s drive of Toulouse international airport and only 25 minutes from the main Airbus site, one of the major employers in the city’s thriving aerospace industry.

Quiz: Where in France should I live?

Where to buy a bargain property

How bought our dream home in south-west France

Previous Article 16 fabulous regional food festivals to visit in France
Next Article WIN! Tasting the Past by Kevin Begos