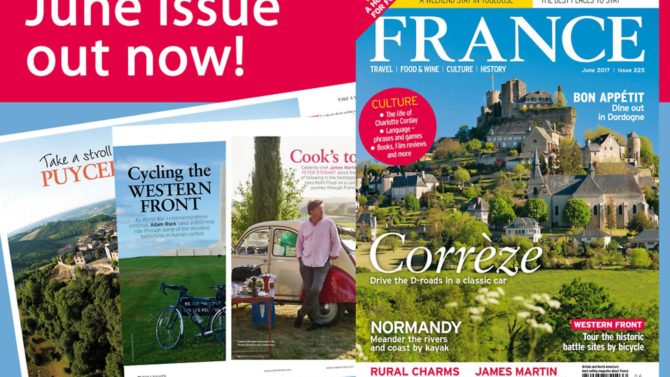 In the June 2017 issue of FRANCE Magazine, we drive around Corrèze in a classic car, spend a weekend in Toulouse and chat to TV chef James Martin about his love of France

Solange Berchemin heads back in time to the lesser-known département of Corrèze for a weekend in a classic car. Her trip sees her travel along the narrowest of routes départementales and around hairpin bends, passing picture-postcard villages such as Curemonte, Uzerche and Collonges-la-Rouge. Her road trip is not all about clocking up the miles; she samples plenty of the local cuisine eating everything from Cul Noir pork and tender Limousin beef to Ovalie cheese.

Where to stay for families

A weekend in Toulouse

Mary Novakovich travels to la ville rose to discover its many cultural attractions. On a mellow autumn weekend Mary takes a tour of the laid-back city’s historic centre, stopping to marvel at sights such as the Capitole building on the elegant Place du Capitole, the Musée des Augustins, the Couvent des Jacobins and the Hôtel d’Assézat. A weekend in this cool southern city wouldn’t be complete without a foodie fix; Mary makes a pit-stop at the Marché Victor Hugo, home to everything from Toulouse sausages to Bleu des Causses cheese and giant tins of the regional speciality, cassoulet.

Celebrity chef James Martin talks to Peter Stewart about his recent adventures in a 2CV through France and the colourful cookbook that captures the magic of his trip. The chef explains how it all stems from his admiration for the late Keith Floyd, who would always take his viewers on a culinary journey. Determined to pay homage to his food hero, Martin embarks on a tour through some of the most picture-postcard regions of France, stopping to meet locals and sample the best cuisine. His trip includes many highlights, one of which was cooking alongside Michel Roux Senior, and looks forward to returning to France again in the near future.

Plus, we go behind the scenes of Paris’s lost property office, suss out France’s seafood markets and uncover some of the best places to eat out in Dordogne

Or take advantage of our great subscription offers!

Previous Article Win! A copy of the book Dinner Chez Moi: 50 Secrets to Joyful Eating and Entertaining
Next Article Should you rent or lease a car during your visit to France?