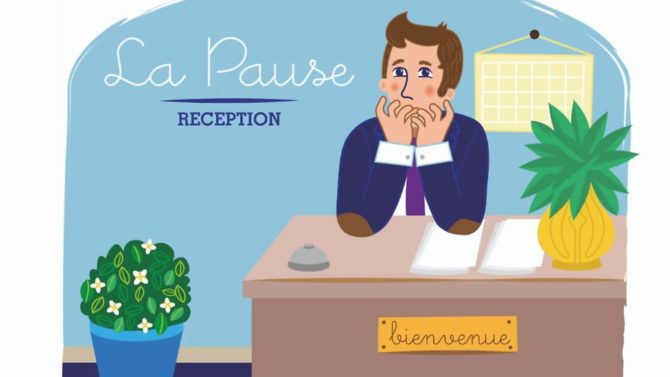 As he prepares to welcome his first B&B guests, comedian and new-found host Ian Moore struggles with first-night nerves

I’ve been a successful stand-up comedian for a long time, so long in fact that I rarely get nervous anymore. There’s always adrenalin – at least there should be – but nerves are largely a thing of the past.

For a brief period, I was the warm-up man for the Jonathan Ross TV show, a gig I was wholly unsuited for, so much so that I would be permanently on the verge of being physically sick before recording. The actor Jim Carrey saw me struggling once before a show and promised to step in for me at any point if needed, that’s how ill I looked – and he did too.

But is there a Jim Carrey equivalent in the chambres d’hôtes/bed and breakfast world? Because I’ve got first night nerves.

We’ve worked through the summer. The painting and decorating in searing July heat only narrowly beating the endless trawling of brocantes for strongest test of patience award. Seriously, brocantes though? I know most of us have a romantic notion of discovering hidden gems, a quick Lovejoy-shortcut to riches, but they’re utterly useless if you’re looking for a cost-effective way of decorating shabby-chic holiday accommodation. Unless of course you’re intent on taking the niche route in short-term vacances rental adornment and intend on kitting your place out solely in grubby infant clothing, broken salad bowls and Johnny Hallyday album covers.

Take the plunge for a new life in south-west France

Events in France in January

The renovation work finished more or less on time, the building team and the plumbing/electricity team were, by the end, so distrustful of each other they had to work on alternate days to avoid ‘incident’. And, apart from a build-up of gas in the newly-installed fosse toutes eaux (septic tank) that had it blown may have wiped out most of continental Europe, it’s all gone relatively smoothly.

So, the thing is up, the place is beautifully decorated, the website (lapausevaldeloire.com) is running smoothly and connected to every internet travel provider you can think of . . . so now, it’s up to me.

In a way of course, it’s just another gig. Only I don’t have to make anyone laugh, I just have to make sure that their bedding is comfy and clean and that their breakfast is just how they like it. That should be easier, shouldn’t it? Less nerve-wracking?

The beauty of stand-up comedy, from a performer’s perspective, is that I can say precisely what I want, when I want to. I have the ultimate freedom to respond in any way I choose to anything that’s, sometimes literally, thrown at me.

But now I’m entering into a world of diplomacy, tact and – gulp – customer service. The one thing in my favour with customer service of course, is that I’m in France. It’s not that customer service doesn’t exist here, it’s just that it’s like wine made outside of the French border, its existence is tolerated but “it’s not for us, thank you very much”.

So should I go full-on native and eschew the principle of the ‘customer is always right’? Behave as part stand-up comic, part French waiter like a cross between Basil Fawlty and Eric Cantona? It sounds like a fun role to play, it also sounds like I’d lose custom pretty quickly too.

No. This is a new venture and a new me. You can’t go treating TripAdvisor as though it’s an audience heckle, or polite guest suggestions as though you’ve just had Statler and Waldorf staying. One must rise above these things, keep the barbed comments for the stage; bite your lip if you have to, smile and be the perfect host.

That was the plan anyway.

“Hello, is that La Pause – Val de Loire? I’ve looked at your website, but I’d actually like to ignore your rules and pricing structure, have six adults stay in the one room for 90€ and all have breakfast included. What do you say?”

Ian Moore will be at The France Show 2019 at Olympia London from 25 to 27 January. The author of C’est Modnifique! will be giving talk in the Flavours of France Theatre on the topic of To B&B or not to B&B: How to start a chambres d’hôtes in France and keep your sanity.