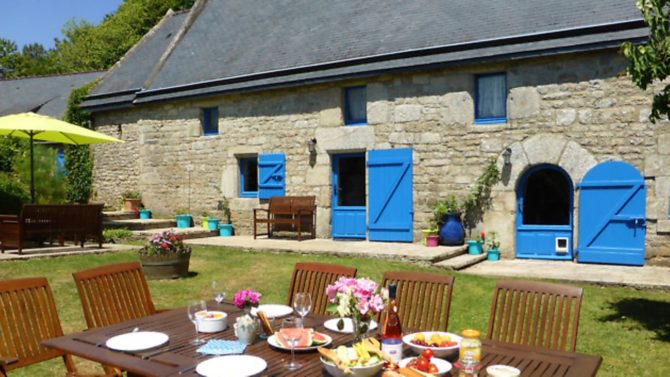 Despite Brexit and the uncertainty about the rights of British people in France, this expat family have decided to stay in Morbihan – find out why and the precautions they are taking

When the economic recession started to hit in 2007, many people panicked at the prospect of an unstable future. But Sue and Steve Anderson decided to put a positive spin on things, treating it as an opportunity to take a chance at trying something new. So as doom and gloom descended in the UK, Sue and Steve opted to set off full of hope and excitement, with their then six-year-old daughter, Maxine, her school books and a mobile caravan in search of adventure and a new life in France. They settled in Morbihan and started a gîtes business which was easy to do with their status as EU citizens. Brexit created much uncertainty but the family wish to remain in France and, having lived in France for more than 5 years, they are eligible to apply for French citizenship in order to preserve their right to live and work in France.

Why did you decide to move to France?

“We knew a worldwide recession was on the way, where there would be no job security, so there was no guarantee that our existing life would continue,” Sue explains. “Also, we had got to a stage in our lives when we wanted to do something totally different. We wanted a breath of fresh air, and so we decided to step off into the unknown.”

Their list of possible destinations had included Italy and Spain but once they had weighed up France’s strengths in terms of culture, healthcare and education, their search became more focused, with a wish list full of specifics reminiscent of Sue’s childhood in South Africa.

Why did this American couple more from San Francisco to rural France?

Why did you choose Brittany?

“I had been spoilt by growing up in Cape Town, so nothing felt right,” Sue says of her hard-to-please streak before adding, “until we arrived in Morbihan. It’s different to Cape Town but the echoes of my childhood were everywhere from the windswept beach and the white houses perched on cliffs to the verdant green forests and the love of music and all the festivities.”

Although the couple had no experience of running holiday accommodation, both had previously worked for the travel and tourism industry and so they were conscious that their location would need to be an attractive destination for holidaymakers. The peaceful commune of Quistinic in Morbihan seemed to fit with their ideal perfectly.

“There is so much to do here, which is perfect for us and our guests,” says Sue. “From the World Heritage Carnac megaliths, the monumental World War Two submarine base at Lorient to beautiful medieval towns and sandy beaches of all descriptions,” she enthuses.

“The Bretons have a genuine warmth and friendliness, with a culture steeped in time and legend,” says Sue. “It is a society that still remembers its roots but is so welcoming of strangers wanting to share a little bit of their paradise.”

How did you choose your property?

The storied past of southern Brittany had already enraptured Sue but when she first set eyes on the blue-shuttered stone property with a backdrop of the Blavet valley she fell even more for the timeless charms of France’s Celtic corner.

“Perhaps, because I come from a New World country, I have a love affair with old buildings, but you could taste the history in every single stone,” she says of the 16th-century cottages. Her preference for pretty did not trump the need for practical and the property clearly plays to both.

“I knew that the two houses would be sufficiently large enough to provide a viable income for a modest lifestyle,” she explains. “The property is away from any busy roads, so it’s safe for kids, and it’s set in the most stunning grounds.”

As the cottages had previously been used as gîtes, the couple were able to host guests within the first week of buying the property. Yet while customers made themselves at home in the cosy accommodation, the young family spent their first summer in their trusty caravan as they waited to build their own cottage from an old pressoir (apple press) in the adjoining land. “Thankfully the process was smooth and we obtained planning permission within six weeks. It proved to be considerably easier than any similar experience we had in the UK,” Sue says.

What difficulties and challenges have you faced?

One thing that Sue didn’t factor into the moving process was the language barrier and with her husband already an accomplished French speaker and her young daughter starting to learn the language at primary school, she decided that it was time to play catch up and enrolled on a beginners’ French course, only to find her classmates had already mastered the basics.

“I was so far behind,” Sue sighs. But, practice makes, well, perfect almost and with continued tuition and a determination to immerse herself in all aspects of French life, Sue says that she “manages to get by”, something she attributes to the courtesy of her French friends. “They take very kindly to my attempts to speak their language,” she laughs.

The family’s new-found network in France has also been there to help when things haven’t been plain sailing. When Steve fell ill during their first winter in France, Sue found herself juggling the demands of settling their young daughter into primary school with the complications of establishing their burgeoning business and trying to look after her husband. But she did not find herself alone, as she recalls: “Neighbours, new friends and strangers turned up unobtrusively or phoned for a chat to check we were okay. Lifelong connections were made. It made us realise how lucky we are,” she says.

How has Brexit affected your plans?

Although raised in South Africa, Sue had EU membership through connections to Scotland which allowed her to live in France as an EU citizen. When Britain leaves the EU this might not be the case anymore, however, because the family have lived in France for over five years, they are eligible for French citizenship.

“We love our adopted home and we want to secure our future here. So the good thing about Brexit is that it will make us go ahead and do what we should have done a couple of years ago and start the proceedings to become French citizens.”

Read more: How to become a French citizen

Previous Article The ultimate mountain living: Chalet Apsara
Next Article How to run a successful vineyard in France