Get behind the scenes at the Tour de France 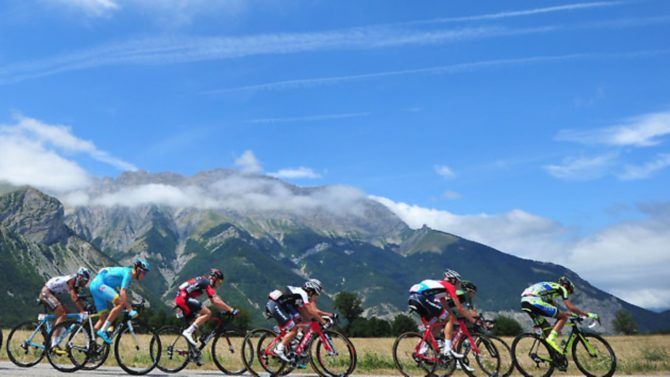 Why not join Sports Tours International, an Official Tour Operator of the Tour de France at this year’s event? Sports Tours International have great travel options and can get you behind the scenes at the world’s largest annual sporting event. They have VIP passes for stage starts and VIP Hospitality at the finish of many stages. Plus there are great opportunities to cycle yourself!

Special offer: save 10% off our 2016 Tour de France holidays when you use the code FM16TDF and book online before 31/5/16 (applies to new bookings only and cannot be combined with any other offer).

Here are some of the Tour de France trips available:

The Grand Depart in La Manche

The trip starts on Friday 1st July, with the first stage of the 2016 taking place on Saturday 2nd July from Mont Saint Michel, finishing that day at Utah Beach.

The French Pyrénées and Andorra

On this tour you will see all the crucial Pyrenean mountain stages and, for those bringing bikes, you will be able to ride many of the famous Pyrenean climbs. Those without bikes will be taken to the stages by our tour vehicle. Like last year the 2016 Tour de France will visit the Pyrénées. There will be 2 stages on French territory followed by 2 stages in Spain and Andorra. The Tour will have its first rest day in the principality of Andorra. The Pyrenean stages are likely to provide us with the first sort-out of the General Classification.

This trip is a seven-day/six-night trip from 7th July through to 13th July.

You can find out more here

On this official Tour de France tour you will see the final, charged stages of the 2016 Tour de France as they venture through the Alps, plus see the finish in Paris. This is the sort of trip where you will get up close to the riders on the mountain stages and be there amongst the fans cheering on their cycling heroes.

Our 10-day/nine-night tour to the 2016 Tour de France starts on Saturday 16th July, and will include top hotels in the best locations, daily ride options and plenty of options to include those who want to watch. The official 2016 Tour de France road book is included as well as official TDF merchandise and exclusive VIP access tickets to watch the Tour from up close. Bike rental is also available if you don’t want to bring your own bike.

It is traditional for the Tour de France to finish in Paris. This year is no exception and you can be there when the Tour comes to town on Sunday 24th July. We have two- and three-nights stays available in Paris, plus the option of grandstand seats or VIP Hospitality, including meals at top Parisian restaurants.

The final day of the Tour will also see the women’s race, La Course by Le Tour de France, take place earlier in the day.

To learn more about the final weekend in Paris and to find out about the various grandstand and hospitality options, click here

Previous Article WIN! A pair of return flights to France!
Next Article Try a cycling holiday in France