Game of Thrones Tapestry to take pride of place in Bayeux 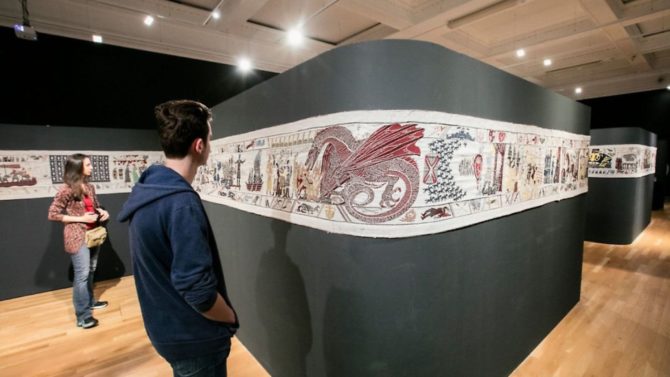 An epic feat of craftsmanship depicting all eight dramatic seasons of Game of Thrones will make the journey to France this autumn to join the Bayeux Tapestry in its Norman hometown.

The Game of Thrones Tapestry was commissioned by Tourism Ireland and series producer HBO to illustrate some of the show’s many memorable scenes. The medieval-style artwork was inspired by the 11th-century Bayeux Tapestry, which portrays the lead-up to the Norman conquest of England. It was created using a modern version of the Jacquard loom, the invention of Frenchman Joseph Marie Jacquard, and hand-finished by an army of talented seamstresses.

The ornate creation was first unveiled in 2017 at the Ulster Museum in Belfast during the show’s seventh season, at which point it reached a mighty 66m long. Now, it has been extended to include scenes from the eighth and final season, and at 87m, it stretches even further than its UNESCO-listed inspiration.

Due to its immense stature, the Game of Thrones Tapestry will not be displayed with the Bayeux Tapestry, but within walking distance of it in the Hôtel du Doyen. It is hoped that the immensely popular programme’s worldwide appeal will draw new and returning visitors to the Calvados city and introduce a new generation to the marvel that is the Bayeux Tapestry.

The TV series may be over, but this intricate portrayal of the Game of Thrones story is essential viewing.

The tapestry will be on display from 13 September to 31 December at the Hôtel du Doyen, Rue Lambert Le Forestier; entry will be free. For more details, visit Bayeux Museum’s website.

Previous Article Essential French holiday words and phrases for your next trip to France
Next Article Watch: 13 nostalgic old videos of France